Manase Savaii Village, Samoa — Seualuga Tauasa Malietoa, the 70-year-old Talking Chief at Manase Savaii village in rural Samoa, has pledged to support women’s rights. His commitment is the result of trainings that the Samoa Victim Support Group (SVSG), a UN Women Fund for Gender Equality (FGE) grantee and local women-led NGO, is conducting to engage local leaders as advocates for “nofotane” women. The term refers to women married to men from a different village and living with their in-laws. They are often exploited as domestic servants and are highly vulnerable to domestic abuse.

Malietoa observed the treatment of nofotane women in his family, including his own mother, for years, and is now determined to spare his daughters a similar fate.

“Since I attended this training, I am ashamed of how I have been treating (…) nofotane women in my family. If I can make amends, and break this cycle for my children, I have to walk the talk,” he asserts. “When this project ends, I will ensure that the changes are sustainable, that people will recognize and accept the importance of nofotane women.” 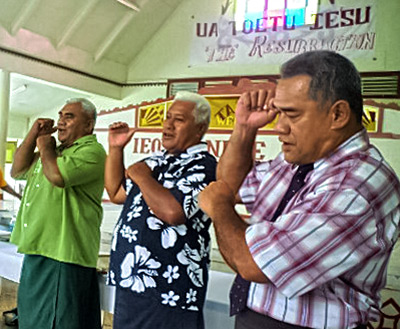 SVSG has gathered numerous testimonies on similar changes in mindsets and behaviours among more than 340 village leaders across 120 villages who have been trained to advocate for nofotane women’s rights and women’s economic contributions since their 2 year programme began in May last year. Pipi Soloma, High Chief of Salelologa, told an emotional story about how his sister, who was a nofotane, died from domestic violence. “[The training] has opened my eyes. I believe in nofotane women having a say in family discussions and in village matters… I will advocate for a change in mentality,” he says.

“The message the training brings is invaluable. It is a wake-up call for equality.”

UN Women FGE Specialist Caroline Horekens says “the principle of ‘Leaving No One Behind’ is at the core of the work that the Fund’s grantees are doing across the globe and this is exemplified in Samoa. The nootane women of Samoa are too often discriminated against; we are working with them directly through this programme to give them knowledge and tools to overcome the many challenges they face but we also work with local influential leaders as well as with the media to change traditional mind-sets”. The original set of influential individuals trained through the programme have in turn sensitized over 800 village leaders, women’s committee leaders and church leaders, ensuring new thinking reaches deep into communities.SVSG has involved 60 nofotane women in meetings to offer their testimonies, which has bolstered their awareness of their rights and self-esteem. Often, this marks the first time their voices have been heard in public spaces. Popular cultural events use songs, poems and traditional entertainments to further expand recognition and support.

The Fund for Gender Equality is UN Women’s global grantmaking mechanism dedicated to the economic and political empowerment of women worldwide. Guided by UN Women’s mandate, the Fund provides technical and financial support to innovative initiatives from women-led civil society organizations that demonstrate concrete results on the ground, especially for women in situations of marginalization. Since its launch in 2009, the Fund has delivered grants of USD 64 million to 120 grantee programmes in 80 countries, touching the lives of more than 10 million direct beneficiaries.