We are equal, we are important, say Nofotane women of Samoa 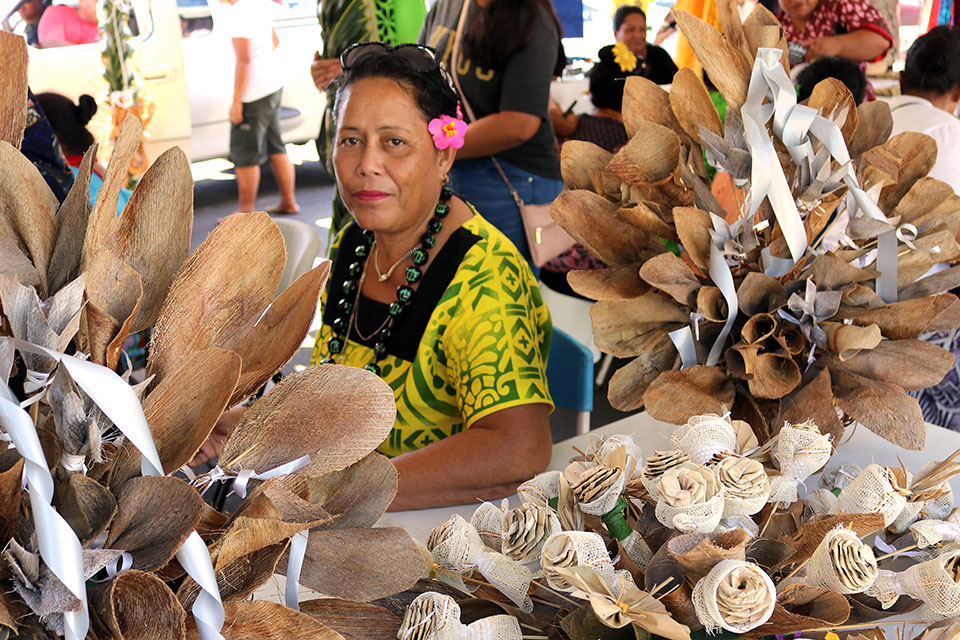 Many women have started their own businesses since participating in skills and livelihood training delivered by the project, including creating and selling handicrafts at the local markets. Photo: UN Women/Sarika Chand

The city centre of Apia is festive today. The market stalls are laden with handmade mats, baskets and traditional jewellery made by women from rural Samoa; music and laughter lace the air. The two-day market is part of an event to showcase the results of a project that trained and empowered 5,170 Nofotane women in the course of the last two years, funded by UN Women’s Fund for Gender Equality.

In Samoa, the term ‘Nofotane’ refers to indigenous women who, after marriage, live in their husband’s village with the husband’s family. Nofotane is an identity that defines their low social stature in the village. Traditionally, they were not allowed to dress as other women in the village and often denied any voice in decision-making within their homes and communities.

“Being a Nofotane is not a bad thing, if you are a Nofotane woman, you are still important, and you have an important role to play in your family,” said Filomena Tootoo, a 32-year-old mother from Tafitoala, a small village on the southern coast of the Samoan island, Upolu.

Tootoo is one of the many women who have started their own businesses since participating in skills and livelihood training delivered by the project. She is now able to supplement her family’s income by creating and selling handicraft. There are many others like her, previously unemployed, who now work in or run commercial kitchens, or make and sell food, clothes and crafts. At the closing ceremony of the project, 20 Nofotane women were celebrated as “star earners” and more than 1,000 others were recognized for their achievements.

Participants in the project came together for a closing ceremony, where 20 Nofotane women were celebrated as "star earners". Photo: UN Women/Sarika Chand

Their journey to empowerment was not easy. Many Nofotane women participating in the project were met with opposition from their own communities at first, but at the end, the communities came around as the project also raised awareness about women’s rights and engaged the husbands, family members and local decision-makers.

“The Samoa Victim Support Group knew that for this project to succeed, it needs to be culturally sensitive. The first 12 months of the project was committed to working in partnership with the village leaders through grassroots advocacy campaigns to influence a change of attitude towards women,” said Siliniu Lina Chang, the president of the organization.

Through continuous engagement with village leaders in 182 villages in rural Samoa, the Samoa Victim Support Group and its partners have shifted attitudes and behaviours towards Nofotane women. More than 2,000 local leaders are seen as being supportive of Nofotane women’s rights and have implemented measures to stop discrimination against these often-marginalized women. Now there are by-laws and village council decisions to formally advance women’s rights, such as by allowing Nofotane women to attend community meetings and wear the same clothes as other women. What’s more, a Nofotane representative has a seat in every village council meeting. A discussion in the Samoan Parliament about the project triggered a national debate around Nofotane rights and harnessed additional political support.

“We have been delighted by how the communities have embraced the changes in attitudes and behaviour towards Nofotane women. Giving Nofotane women skills and recognition has in turn been a tremendous catalyst for attitudinal changes within families and communities,” said UN Women Country Programme Coordinator in Samoa, Papalii Mele Maualaivao.

"When women contribute, the nation benefits, everyone benefits," she added.

Tofa So’onapulegutu Tia, 67, and Fuatai Tololoa’a, 62, are not Nofotane women, but came to the market event in Apia from Sala’ilua, Savai’i, an island that’s an hour away by ferry, to support the Nofotane women who had married into their community.

“We are the girls of the village and we came to support the Nofotane; in our hearts we respect them and they are not different from the other girls in the village,” said Tia.

The benefits of the project already extend beyond the Nofotane and their families. Moana Kose, a mother of two, from Safotu in Savai’I, initially joined the training to learn a craft. She has since been hired by the Samoa Victims Support Group to assist in training others. She moved to the capital and continues to teach and empower many other marginalized groups of women to start their own small businesses.

During the closing event in Apia, there were hundreds of stories shared by Nofotane women; some were survivors of abuse who have renewed confidence, others were joyous that they were able to educate their children with the extra income. Some Nofotane are now the main breadwinners for their family, whilst others are proud that they have a say in family matters. But for all of them, the tide of change has come, and there’s no going back now.

The Fund for Gender Equality is UN Women’s global grant­making mechanism dedicated to the economic and political empowerment of women worldwide. The Fund provides technical and financial support to high-impact, innovative initiatives from women-led civil society organizations that demonstrate concrete results on the ground, especially for women in situations of marginalization. Since its launch in 2009, the Fund has delivered grants of USD 64 million to 120 grantee programmes in 80 countries, touching the lives of more than 10 million direct beneficiaries. The Nofotane project in Samoa has trained over 5,000 women, providing them with livelihood skills and specialized financial literacy. As a result, 646 self-employed Nofotane women are now earning a living from small business initiatives they’ve set up, and more than 20 support groups have been created to sell their products.