Islamabad, Pakistan — To experience another woman's life through a 60-seconds documentary can be a revelatory experience, if crafted and narrated well. 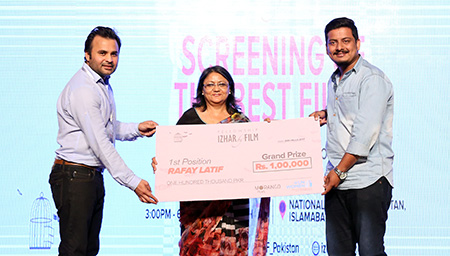 The Izhar by Film Fellowship (IBFF), an initiative of Morango Films, with support from UN Women (the United Nations Entity for Gender Equality and the Empowerment of Women) held a screening ceremony of the top 25 short films produced by trainees from across Pakistan who participated in the first-ever fellowship program on the social and political rights of women. The event was held on Thursday 30 March 2017 at the National Library of Pakistan, in Islamabad. 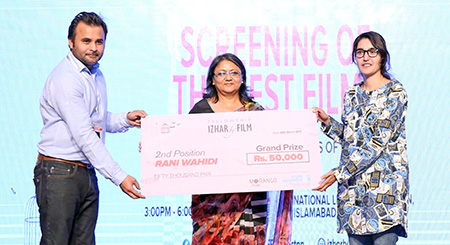 During the ‘training highlights’, guests were shown how the 60 trainees through a 4-day capacity-building session held in February, in Islamabad, were guided on how to use filmmaking as a medium for storytelling and evoke the spirit of responsible citizenship. Based on their learning, the trainees produced 12 group projects on one of the four focus areas of the fellowship under the guidance of renowned mentors. Following the training programme, the aspiring filmmakers developed and submitted their individual 60-second documentaries, of which the top 25 were screened during the ceremony. 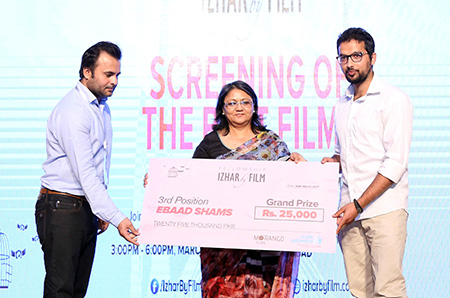 The initial screening was followed by a panel discussion, where eminent panelists (Tahir Imran, Journalist, BBC; Aisha Sarwari, Author and Human Rights Activist; and Abrar ul Hassan, Founder of Morango Films) spoke of the power of filmmakers to select what to ‘report’ and ‘showcase’. Panelists also highlighted a need to be sensitive to cultural and religious concerns whilst aiming to shape public opinion through greater impact, as well as determining what the public considers to be important social issues.

In addition, awards were also presented to the following 3 filmmakers under the category of ‘film with the best message’:

Speaking during the screening ceremony, Abrar ul Hassan (Founder Morango Films) expressed his delight over the work of the IBFF trainees and said, “It is overwhelming to have received such impactful films made by the aspiring youngsters, who have endeavored to depict aspects of rights of women in a very realistic way.”

In delivering the closing remarks, Sangeeta Thapa (Chief Guest and Deputy Representative, UN Women Pakistan) commended Morango Films for the first-ever IBFF and said, “It is heartening to see the overwhelming response to the fellowship and strong messages that have been shared with us through these films. We all have a role in creating awareness on political and social rights of women, whether through films or any other medium. As advocates and champions for gender equality, your messages can and do impact the way people perceive the roles and rights of women. On behalf of UN Women, I congratulate each one of you and we look forward to together ‘Stepping It up for Gender Equality where we have a Planet 5050 by 2030.”

This collaboration between UN Women and Morango Films falls under UN Women Pakistan’s project on “Women’s Peace, Security, Rights and Voice: safe public spaces, community outreach and empowerment, and political awareness and advocacy” with the support of the Government of Australia. 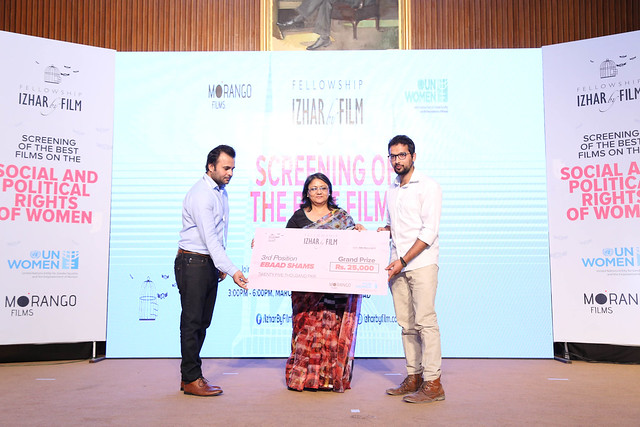 Morango is a digital media content marketing organization which has been helping clients connect with their consumers for over 10 years. It focuses on activities pertaining to education and awareness in an effort to inculcate social values like peace, tolerance and constructive conformity in the society and encourage civic participation in this regard.

UN Women is the UN agency for gender equality and women's empowerment, established to accelerate progress on meeting the needs of women and girls worldwide.

Related News
20/12/2021
Joint Statement: UNHCR and UN Women join efforts to protect and uphold the rights of women and girls in Afghanistan
30/11/2021
I am Generation Equality: Tabbasum Adnan, Founder of First All-Women Council of Tribal Leaders in Pakistan
24/09/2021
Strengthening institutions key to women rights, says President Alvi at National Seminar on Protection of Women Against Harassment
11/08/2021
Take Five: “Make sure all toxic cycles of family traditions end with you”
14/02/2019
Activists battle multiple kinds of discrimination to secure right to citizenship in Myanmar
END_OF_DOCUMENT_TOKEN_TO_BE_REPLACED