Delhi, India — The Ministry of Panchayati Raj, Government of India and the United Nations Entity of Gender Equality and the Empowerment of Women (UN Women) have signed a Memorandum of Understanding (MoU) for a project to strengthen the capacities of governance institutions to ensure that gender concerns are embedded in the design and implementation of legislation, policies and programmes. 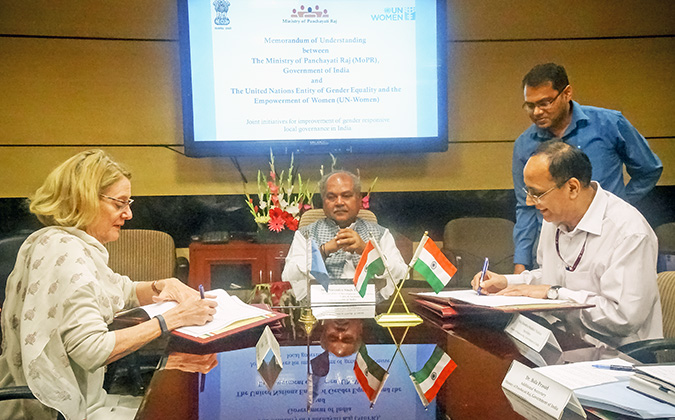 The Union Cabinet chaired by Prime Minister Narendra Modi had given its approval for the signing of the MoU last month.

“I am very happy that the Government of India is collaborating with UN Women to strengthen gender responsive governance,” Mr. Tomar said. “It is in line with the Government’s priority to promote good governance and gender equality, emphasising the strengthening of women panchayat leaders as changemakers.”

The MoU builds on a previous collaboration between the Ministry of Panchayati Raj and UN Women to promote the participation of women in Panchayati Raj Institutions (PRIs). The objective of that partnership was to enhance the capacity of elected women representatives to be effective leaders and champions of gender equality.

The new phase of the collaboration will include participatory design of governance processes and effective implementation of laws, policies and programmes to promote gender responsive governance. 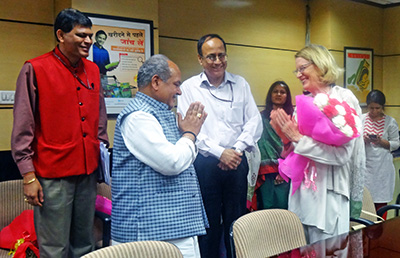 The Secretary, Ministry of Panchayati Raj, acknowledged the technical support being provided by UN Women. “The Ministry looks forward to working with UN Women to promote women’s leadership in local governance,” he added.

“The Prime Minister has underscored the government’s robust and unambiguous commitment to strengthening Panchayati Raj Institutions. The government also recognises their role in achieving the global sustainable development agenda by the year 2030,” said Dr. Tavares.

The MoU emphasises the achievement of time-bound results in the implementation of activities, which will be implemented at the district and sub-district level in six states – Andhra Pradesh, Madhya Pradesh, Karnataka, Odisha, Rajasthan and Telangana.

The activities are set within the framework for cooperation under the United Nations Development Assistance Framework (UNDAF), which defines the collective actions and strategies to be undertaken by the UN to assist the country in achieving its national development goals.