Andhra Pradesh, India — “If only I could speak English and was trained in basic housekeeping skills, I would have had the freedom to negotiate better pay for my skills and services with my employer abroad”. Lakshmi, from the Indian state of Andhra Pradesh, echoes the sentiment of thousands of women domestic workers migrating to the Gulf countries each year. She first travelled to the region nearly 15 years ago, working as a domestic help in households in Dubai, Qatar and Bahrain. She visits her home in Andhra Pradesh once every two years. 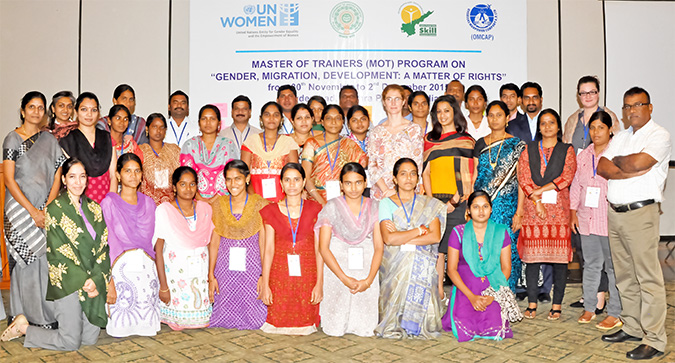 In 2014, the highest number of women domestic workers travelling from India to the Gulf region was from Andhra Pradesh. Most of these workers travelled to Saudi Arabia, United Arab Emirates, Kuwait, Qatar and Oman.

For many women like Lakshmi, migration offers the promise of a better life for their families back home. However, it also comes with the risk of exploitation and vulnerability to violence. Exploitation can take many forms, such as contract substitution – where a worker is asked to sign an employment contract that is different from the one initially agreed upon – low wages, withholding of wages, delays in payment of wages, long hours of work, no break periods or rest days, restrictions on freedom of movement and association, no access to collective bargaining, inadequate food and accommodation, and the lack of privacy. Many workers also face sexual and gender-based violence. Migration policies and practices have been slow to recognize these risks and to make the process safe for women. 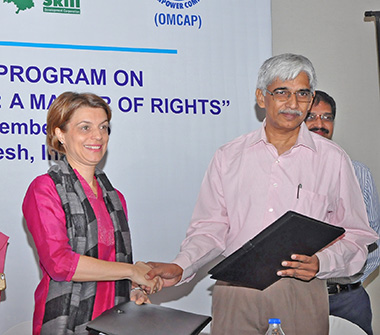 UN Women sought to close this gap by launching a ‘training of trainers’ programme on safe migration in collaboration with the Andhra Pradesh State Skill Development Corporation (APSSDC) established by the Government of Andhra Pradesh. The aim is to formalize the migration channel for women migrant workers so that their rights and entitlements are protected.

The first such training on ‘Gender, Migration and Development: A matter of rights’ was held in Hyderabad, Andhra Pradesh, in December 2015. More than 30 representatives from APSSDC, state recruitment agencies and non-governmental organisations from East Godavari, West Godavari and Kadappa districts of the state attended the training. These districts are among those recording the highest numbers of women migrating to the Gulf every year.

The training was led by UN Women Training Centre in Santo Domingo, Dominican Republic and included the use of a manual titled ‘Gender on the Move: Working on the Migration-Development Nexus from a Gender Perspective’ developed by the Centre in 2013, which was adapted to the local context. The manual offers tools to help design programmes and policies that strengthen the positive effects of migration both in origin and destination countries.

The participants studied issues that impact women migrants because of their gender, analysed trends and challenges, and formulated strategies to promote the rights and agency of women migrant workers through a gender lens.

Around 0.4 percent of the total population of India migrated internationally in 2013. Of this number, about 15 percent migrated to 18 countries, including Gulf countries, which have strict laws regulating the entry and employment of foreign nationals and do not provide avenues for grievance redressal or mechanisms for the protection of the rights and entitlements of these migrant workers.

Women domestic workers accounted for about 2.5 percent of migrant workers to the Gulf region in 2013. These figures are mere underestimations given that most domestic workers travel through illegal channels including tourist visas and remain undocumented. Moreover, pre-departure orientations – in which the migrant workers can be made aware of destination country backgrounds, cultural norms and practices, and their own rights and entitlements – are not mandatory by law.

The lack of preparedness before leaving the country only heightens the workers’ vulnerability.

The increasing number of women migrating for work points indicates the growing ‘feminization’ of migration and labour. Previously, women generally migrated to join or reunite with a husband or a family already residing in the destination country. Now, domestic work is the largest factor driving the international migration of women workers. Ensuring the safety and rights of these workers is therefore critical.

Investing in safer channels for migration is also important for economic reasons. Remittances from destination countries now account for more than three percent of India’s Gross Domestic Product, enough to fund the health (4 per cent) or education (3.9 percent) budget of the Government of India.

India is one of the 164 countries that are yet to ratify the International Labour Organization’s C189 Domestic Workers Convention 2011. Government initiatives to ensure equal rights and decent work for migrant workers often do not reach women workers. Skill building schemes such as the Pradhan Mantri Kaushal Vikas Yojana (Prime Minister’s Skill Development Scheme) 2015, are also inaccessible to migrant workers as they are not formally categorised under any skill set.

Ensuring the rights and entitlements of domestic workers is also critical for the achievement of Sustainable Development Goal 5 – to ‘achieve gender equality and empower all women and girls’ – and Goal 8 – to ‘promote sustained, inclusive and sustainable economic growth, full and productive employment and decent work for all’.