Dhaka, Bangladesh — UN Women and Bangladesh's Ministry of Foreign Affairs have jointly launched the drafting of a National Action Plan to implement United Nations Security Council Resolution 1325, which calls for increasing women's participation in efforts to maintain peace and security. 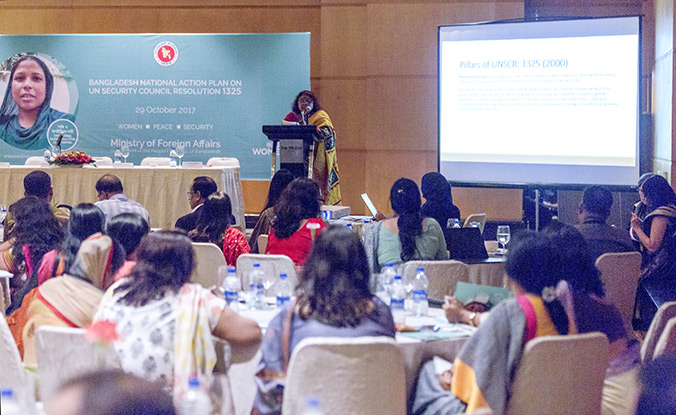 Guests and speakers attend the meeting on drafting of the National Action Plan on UNSCR 1325. Photo: UN Women/Arshad Ron 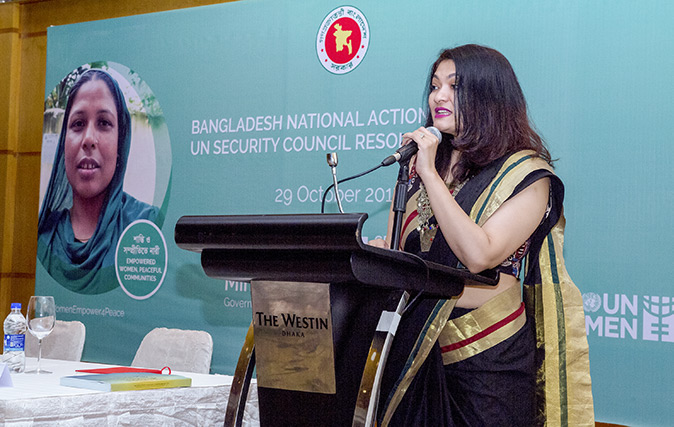 The landmark Resolution 1325 was adopted in 2000 under the initiative of Bangladesh as a non-permanent member of the Security Council. With the Resolution, the international community for the first time recognized the disproportionate and unique impact of armed conflicts and crises on women and girls, and called for the direct participation of women and girls in bringing about and maintaining peace and security. The Security Council recommended that States adopt National Action Plans to facilitate implementation of 1325 and subsequent resolutions. To date, nearly 70 states have adopted such plans.

Bangladesh's National Action Plan will encompass all strategic and practical issues involved in the four pillars of the Women, Peace and Security Agenda: Participation, Prevention, Protection, and Relief and Recovery. 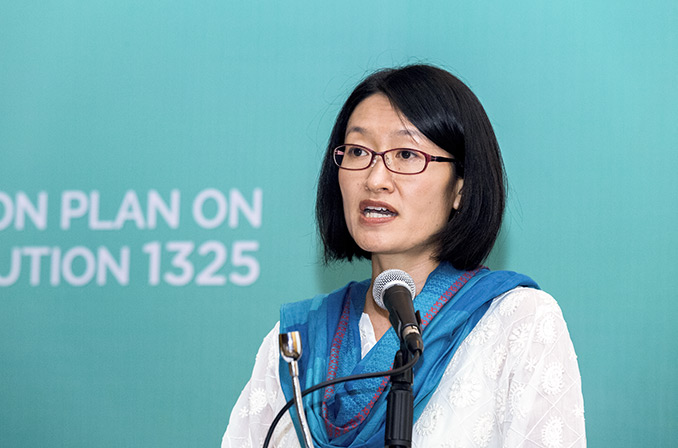 "Our commitment to attending the objective of the Sustainable Development Goals and our Women Development policy have set the right environment for implementation of this Resolution 1325," said Sadia Faizunnesa, the Director General-UN of Ministry of Foreign Affairs. "On top of that, we have rich experience in working with vibrant civil society organizations and NGOs working on various issues related to women for many years. The Government supports and promotes women as actors of peace. Our National Action Plan on 1325 will reflect these commitments."

Md. Shahidul Haque, Secretary of the Ministry of Foreign Affairs, said the Government has been working to ensure justice for women not just in Bangladesh, but also globally with its efforts to end sexual exploitation and abuse by United Nations peacekeepers.

The development of the National Action Plan will be led by Meghna Guhathakurta, a former professor of international relations at the University of Dhaka and currently the Executive Director at Research Initiatives Bangladesh. At a workshop, Prof. Guhathakurta presented the methodology for drafting a plan that would unlock women's potential as decision makers, peacekeepers and peacebuilders in the context of Bangladesh. Government agencies, civil society organizations and other groups will be consulted, and their recommendations will be incorporated into the plan.

Related News
28/03/2022
National Colloquium on Learnings from the Women Peace Café
22/09/2021
From where I stand: “I wanted my daughters to know who makes the decisions at home”
24/05/2021
From Where I Stand: “Three words to keep in mind – integrity, empathy and humility. I serve with honesty the people who need me the most”
22/02/2021
From Where I Stand: “You can very well be a mother and a front-line combatant”
07/02/2021
Women’s meaningful participation essential to peace: Bangladesh commemorates 20 years of UN Security Council Resolution 1325 on Women Peace and Security
END_OF_DOCUMENT_TOKEN_TO_BE_REPLACED