Dhaka, Bangladesh — UN Women Executive Director, Phumzile Mlambo-Ngcuka praised the Government of Bangladesh, as well as its people, for its generosity in welcoming the Rohingya despite its own priorities and its efforts to address needs of women and girls and protection of their rights and dignity during this world's worst humanitarian crisis, the press was informed today. 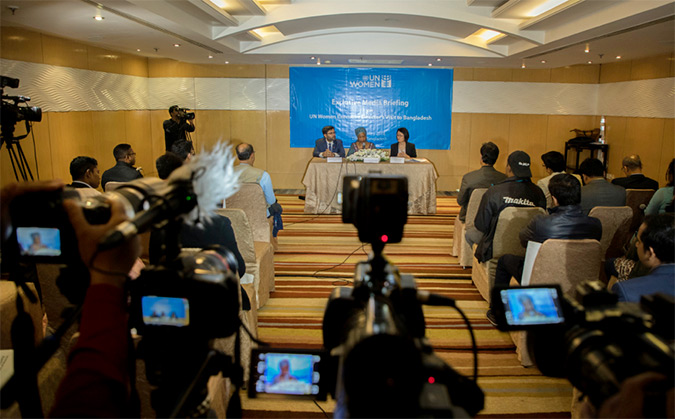 The Executive Director ended her five-day visit today, in which she met with the Prime Minister Sheikh Hasina, along with other dignitaries, civil society leaders, and visited the Rohingya camp in Cox's Bazar, among others.

Executive Director, during her visit at the Rohingya refugee camps in Cox's Bazar, met with a number of refugee women and girls. She visited the UN Women Multi-Purpose Women's Centre and the Women Friendly Space run by Action Aid where UN Women supports women's skills training, and spoke with women and young girls that were at the Centres. Both these "women-only" places provide a safe space for the most vulnerable, neglected and marginalized Rohingya women, especially single mothers and adolescent girls that have little opportunity to come out of their houses due to the strict gender norms and segregation imposed by cultural and religious practices.

On her first day of the visit, Executive Director was part of a signing ceremony of a Memorandum of Understanding (MoU) between UN Women and the National Human Rights Commission (NHRC) of Bangladesh. The MoU accentuates the "aligned mutual interest" of the Commission and the strategic priorities of UN Women to end impunity for conflict-related sexual violence, through its work on peace, security and humanitarian action.

United Nations Entity for Gender Equality and the Empowerment of Women (UN Women) works to eliminate discrimination against women and girls, to empower women, and to achieve equality between women and men.

Related News
01/02/2022
In the words of Tarikul Islam
16/07/2019
People admire creativity of Rohingya refugee women at Dhaka art fair
04/07/2019
In Bangladesh, a lawyer-activist helps Rohingya survivors of violence
12/06/2018
From where I stand: “Women need support from each other to cope with this crisis”
03/05/2018
From where I stand: “I am worried about the monsoon… will our small shelter keep standing?”
END_OF_DOCUMENT_TOKEN_TO_BE_REPLACED