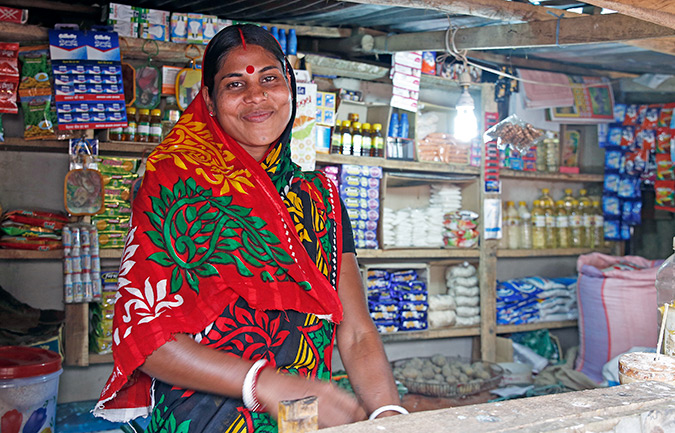 Sita Rani Gour, 31, is expanding her grocery shop in Rajnagar, eastern Bangladesh, after receiving a one-time grant of 19,000 taka (US$230), from a UN Women programme supported by the Government of Japan and implemented by the non-governmental development organization BRAC.

When she first opened, the shop was very small. The new funds have allowed her to introduce many new products such as soap, toothpaste to complement the grocery items such as sugar, wheat, rice and salt she was offering. The extra income will be very welcome to the family, as Sita's husband earns around 85 taka per day as a labourer at a nearby tea plantation. His income is not enough to cover the household expenditures and the education of their two children.

Sugar is one of the most popular products she sells, given the proximity of several large tea plantations in the area, as well as tea stalls. Sita herself started with a small tea stall, which is still attached to the grocery shop, but currently being renovated to make more space. She is now expanding the grocery shop as well, with the financial support from UN Women and BRAC.

Sita is part of a Polli Shomaj, or women's village group, that has been selected for support from the UN Women programme titled Women for Peace and Social Cohesion run by BRAC. This is part of a broader regional programme, Empowered Women, Peaceful Communities, aimed at preventing violent extremism and building resilient societies. There are around 1,200 women collectivized into the Polli Shomaj, of which half have been selected for financial packages to set up small-scale businesses such as tailoring, shops, or raising cattle.

Sita has received financial support and business development training, including how to run the business, make market linkages, etc. Since being associated with the programme, she has also received leadership training. Now, along with sales work, Sita also does daily bookkeeping. Sita believes that having a shop of her own has upgraded her social status within her community and has also made her husband acknowledge her hard work.

When asked why she chose to set up a grocery store, she replied: "I studied only up to class 8. I know I'm not eligible for many jobs that I wish to do. Moreover, the labourers working in tea gardens also can't make much money and often struggle to meet daily needs, just like my husband. So, instead of going for anything else, I decided to start a business that can generate a daily income and so that I can also give my children a better life."

Sita has big dreams from her daughter Shwapna, and hopes she will pursue higher education and obtain a university degree. Sita does not want Shwapna to have an early marriage, like she did. Sita has been an example to a lot of other women in her community, by demonstrating success in managing her own grocery store. Now there are other women within the village who are also generating their own money, mostly through poultry businesses.

Sita not only operates the shop by herself but also goes to the nearby market to buy products for her store. She has developed the skills to negotiate for better prices. Sita's husband also accompanies her sometimes when they need to go to the market. Together they have been running the business quite efficiently and are happy with the increased number of customers coming to her store.

"Someday I'll make this store a much bigger one, and have a fridge too," Sita said. "I will then be able to serve a lot of people, especially with cold drinks and ice cream during summer."