Celebrating ahead of International Women's Day, the HeForShe Run 2018 was held by the Indonesia Business Coalition for Women Empowerment (IBCWE) in partnership with UN Women with participants able to choose between a 5-kilometre and 10km course. The fun run was opened by the Coordinating Minister for Human Development and Cultural Affairs, Puan Maharani and aimed to support HeForShe campaign which invites men and boys to be equal partners and agents of change in order to accelerate the achievement of gender equality, as well as to increase awareness about the importance of achieving gender equality in the workplace and in all walks of life.

"Gender equality will be achieved when men and women have the will and take actions to work together toward equality," said Shinta Kamdani, President of IBCWE. "We can start by making these efforts in our closest circle, such as our own family and in the workplace. Specifically in the workplace, data has shown that, women's labour force participation is less than men. The gap is even more evident in the number of women who hold strategic positions at top management level. Through this event, we would like to invite everyone to work together and to provide equal opportunities for women to participate in the workplace and in the society."

Anne Patricia Sutanto, Chairperson of the HeForShe Run 2018 and Member of IBCWE's Advisory Board, said "The HeForShe Run provided runners with a platform where they can showed their sportsmanship, as well as their support for gender equality and the economic empowerment of women in the workplace."

The fun run was also held to support HeForShe campaign which invites men and boys to be equal partners and agents of change in order to accelerate the achievement of gender equality.

Sabine Machl, UN Women Representative said "Gender equality benefits both women and men as well as the entire society. It requires everyone to take action. Through the HeForShe campaign, we invite men and boys as equal partners to promote gender equality and women's empowerment. Let us make use of our voices to create transformative change so that all women and men have equal opportunities to reach their full potential."

Aside from the run, a competition for the best slogan to support gender equality and HeForShe commitments was held. In addition, seven murals with messages of gender equality in the workplace were displayed along the running track. 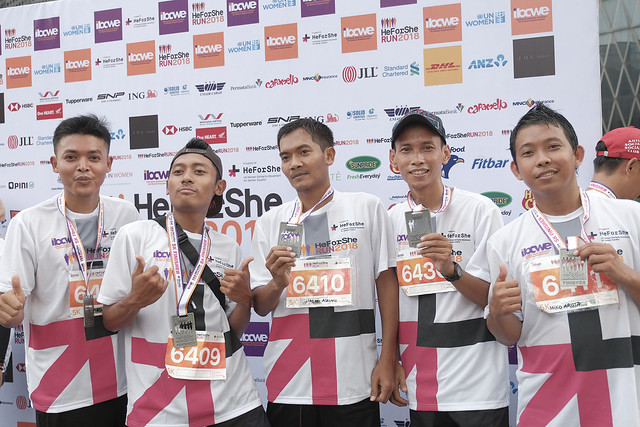