Phnom Penh, Cambodia — Government officials of Cambodia, Lao PDR, Myanmar and Thailand have jointly recommended steps to protect the millions of migrant workers in the region from exploitation and abuse. 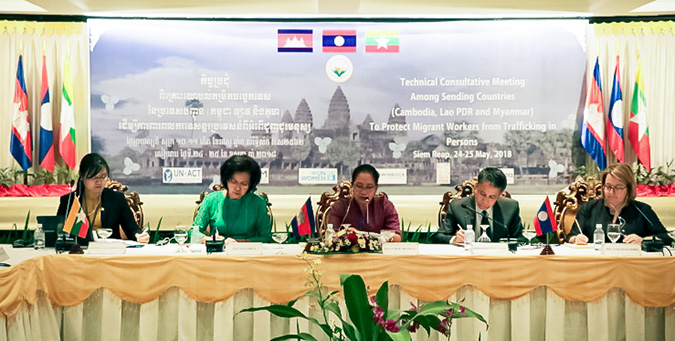 The officials from various ministries made the recommendations at a 24-25 May consultation that also included employers, civil society and international humanitarian organizations, and United Nations agencies - UN Women, International Organization for Migration (IOM), International Labour Organization, and United Nations Action for Cooperation Against Trafficking in Persons. They met in the northwestern city of Siem Reap.The meeting’s purpose was to promote joint strategies to better protect migrant workers. The delegations discussed good practices, lessons learned, and remaining gaps and challenges in handling the migrant flow.

They focused on requesting that Thailand, the destination of the vast majority of the workers, fulfill commitments to protect at-risk workers and collaborate more with the labour-sending countries on the issue.The joint recommendations are to be sent to the respective Governments for approval at a later, high-level meeting.

They comprise steps to:

“I encourage the Governments of the three countries to put hands together to solve the problems,” said Onevong Keobunnavong, head of the Lao PDR delegation from the Ministry of Labour and Social Well-being.Thailand hosts a little over 3 million documented migrants from Cambodia, Lao PDR and Myanmar, according to the IOM Thailand National Strategy 2017-2020 report. 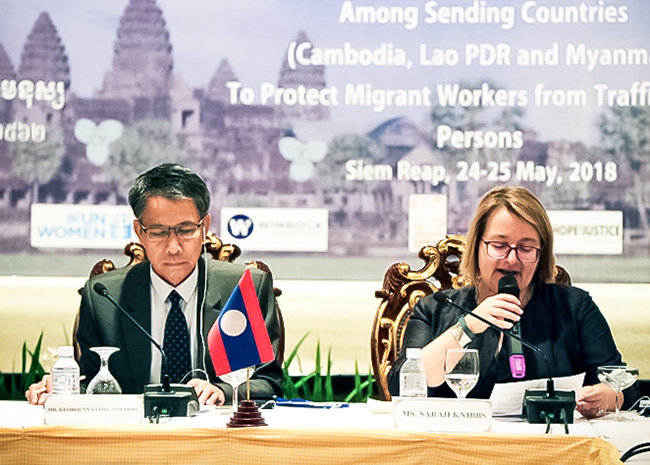 The report said there also are 1-2 million irregular migrants in the country. Because of the complexity of regular migration procedures, many workers go to Thailand through irregular channels without proper documents and permission to work. Their precarious status puts them at particular risk of human trafficking, abuse and labor exploitation.

Sarah Knibbs, UN Women’s Acting Country Representative in Cambodia, told the Siem Reap meeting that while the migrant worker flow provides economic opportunities for both the labour-sending and the destination countries, it can also be a dangerous journey, especially for women.

“Women migrant workers, in particular, experience multiple forms of discrimination,” she said. “They are often discriminated against both ad migrants and as women. This makes them particularly isolated and vulnerable to abuse and exploitation. Cambodian women migrant workers, for example, mainly migrate to Thailand and work in the sectors of domestic work, hospitality, agriculture and construction. These sectors are more likely to be low-paid and to employ undocumented workers--factors which contribute to the risk of forced migration and trafficking.”