Mae Sot, Thailand — Standing on the Thai-Myanmar Friendship Bridge in Mae Sot, it’s hard not to be struck by the sheer number of people making their way across. Up to 10,000 people cross the bridge daily, with more traversing the Thai-Myanmar border on boats via the river below. On Sunday, Thai officials affirmed to high-level visitors from the Embassies of Canada and Japan that a second Friendship Bridge will be completed in April this year, which will mean expanding trade and movement of people for the area. 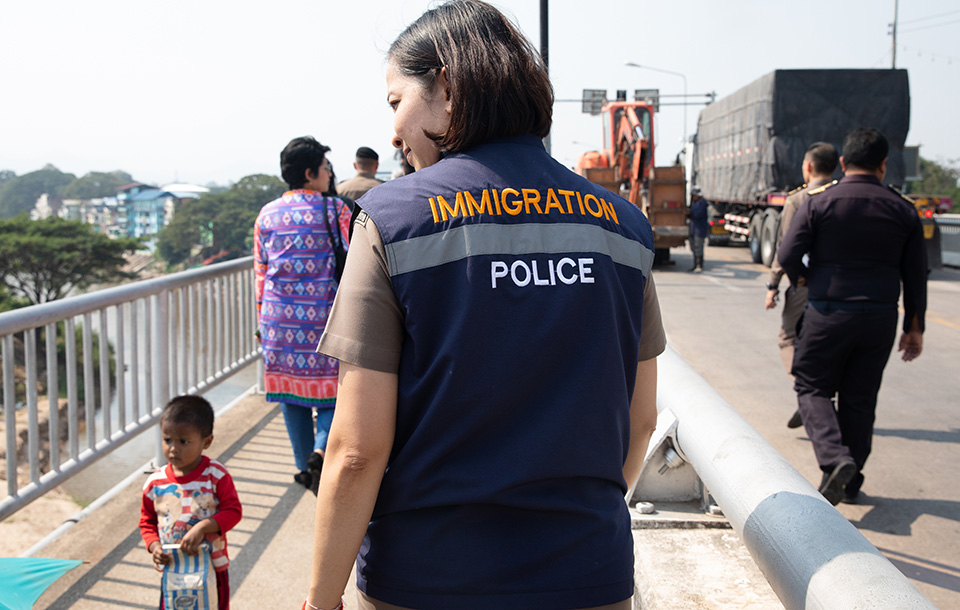 The Canadian Ambassador to Thailand, HE Donica Pottie, and First Secretary of the Japanese Embassy to Thailand, Mami Ueno, visited Mae Sot to learn more about a joint United Nations agency programme to prevent trafficking as well as mitigate the potentially harmful impacts of this expanded movement between Thailand and Myanmar, in order to capitalize on the new growth it promises for the area. 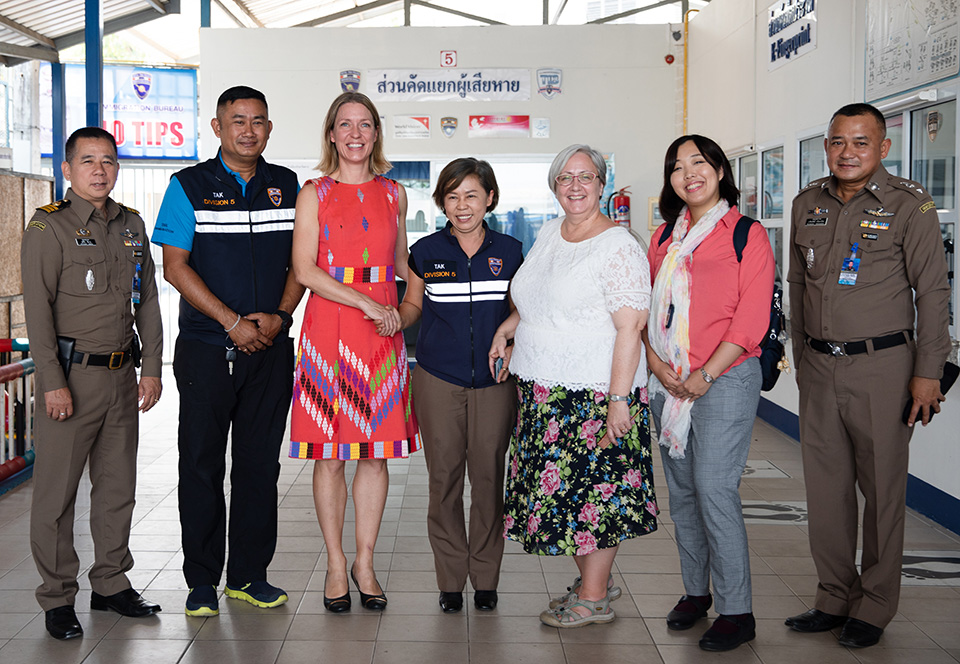 Since economic opportunities in the bordering province in Myanmar are scant, a large number of migrants have been steadily flowing into Mae Sot since the first bridge opened several years ago. Today, around 120,000 migrants from Myanmar reside in the city. Of those, about 65 per cent are considered irregular migrants. This creates a dangerous situation in which individuals are vulnerable to human trafficking, especially girls and women.

“When people are without legal status, they are easily taken advantage of by their employer,” said Ampika Saibouyai, Director of Rights Beyond Borders, an NGO operating in Mae Sot and UN Women’s partner.

“They tend to accept lower wages, and they are scared of reporting to local authorities. For this reason, they are always looking for a better job opportunity. This is what makes the traffickers’ offers so appealing. Women and girls are at even greater risk due to the increase of the sex industry in the area.” 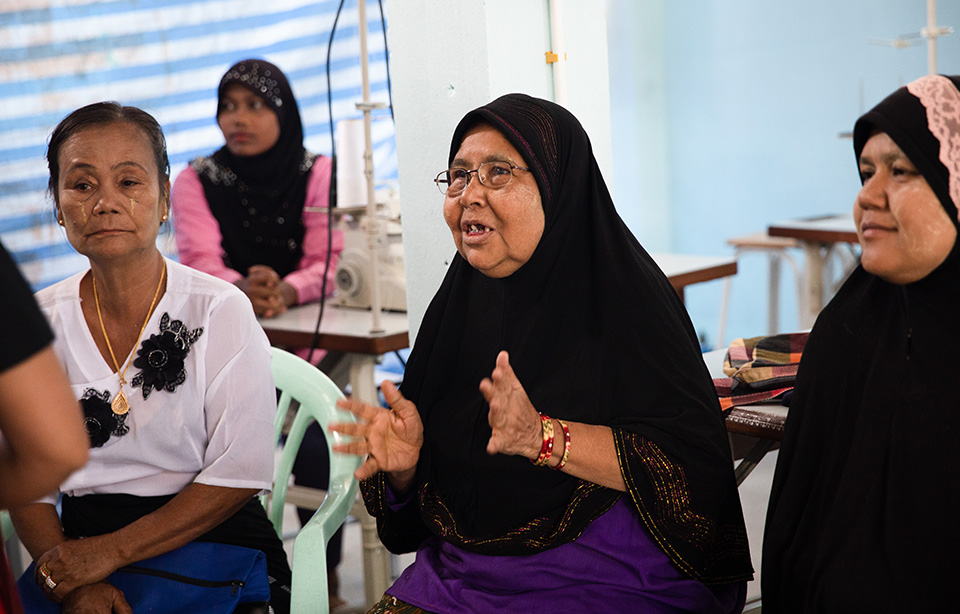 Women from the Muslim Myanmar community living in Mae Sot discuss their challenges to living and working in the area. While many of the community members are without legal status in Thailand, they consider Mae Sot their home. Photo: UN Women/Stephanie Simcox

Ambassador Pottie and Ms. Ueno visited women from the community, who recounted the challenges they face when looking for work and how a lack of awareness makes community members particularly vulnerable. In a separate closed discussion with UN Women, one woman, Bennu*, explained how a friend of her husband had offered her a job in Bangkok.

“When I arrived, I was locked in a house with a broker and two other women,” she said. “The broker then said he did not like me for the job, and I had to pay back the transportation money, or they would sell me into prostitution. I was able to escape to a Buddhist temple, and a monk helped me return home.”

Stories like Bennu’s are increasingly common, which is why UN Women and the UN Office on Drugs and Crime (UNODC) began jointly implementing a programme in April 2018 to mitigate the impacts of transnational crimes, particularly trafficking, in the Greater Mekong Sub Region. 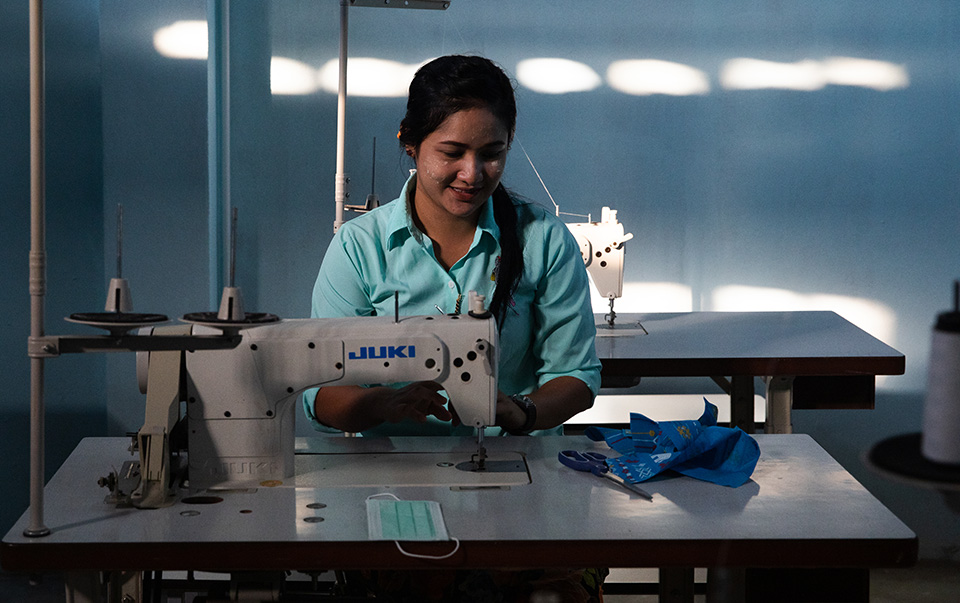 A Muslim migrant woman from Myanmar, pictured at the Islamic Community Center in Mae Sot, Thailand, where she studies sewing skills and learns about the difference between safe and unsafe migration. Photo: UN Women/Stephanie Simcox

The project works in at-risk border communities, like Mae Sot, to provide assistance to survivors of trafficking and to train those at risk in a range of areas including job skills development and raising their awareness on the difference between safe and unsafe migration.

“When women have skills, when they have knowledge, they have ways to earn a living, and also, they feel more confident and they can empower women within their communities,” explained Anna Karin Jatfors, Asia-Pacific Regional Director a.i. for UN Women.

Ambassador Pottie, said: “I believe that women who come together can make a difference for themselves and their families. These women we met today are people with real courage. They know what the issues are and where they want to be. I’m sure with UN Women and with other donors, we can move this issue forward.” Ms. Ueno agreed. “Japan remains committed to contributing to the efforts in diminishing human trafficking, together with the Government of Thailand and [others].” she said. 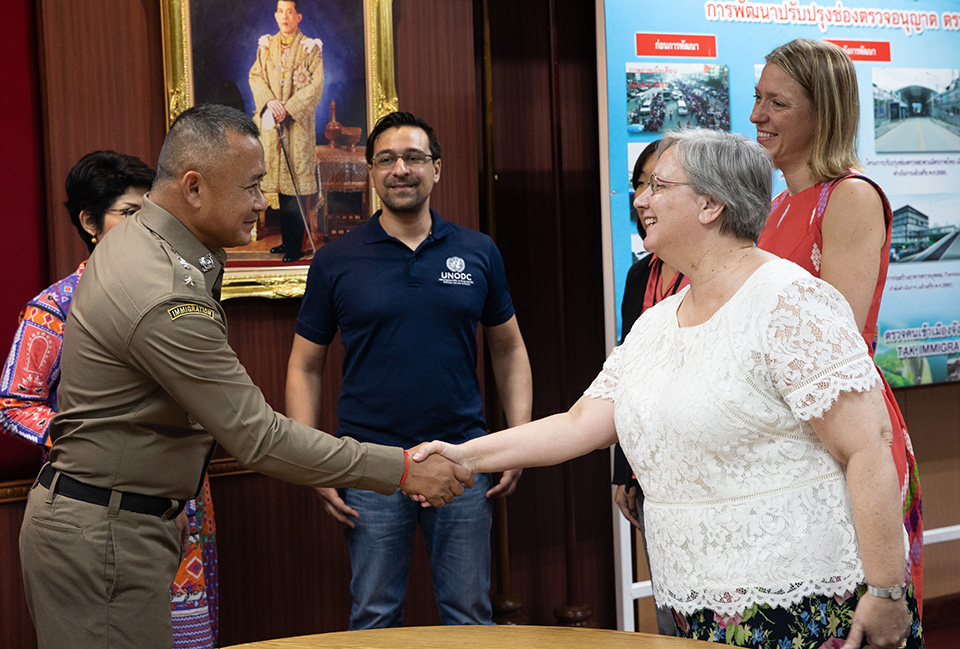 Another aspect of the programme is to train front-line officers who are interacting in the communities to better understand the signs of human trafficking, the needs of survivors and the referral networks that exist to support them. By training law enforcement agents and border officials to be more gender sensitive and aware, not only do their interactions with victims improve, but more survivors receive assistance and more criminals can be apprehended. The end result is that law enforcement officers can better meet the needs of the communities in which they work, and that communities, especially women, are more empowered and aware of how to prevent trafficking.

In Bennu’s case, the recruiter was caught and is now serving 27 years in prison. However, the broker is still free. As for Bennu, she is now receiving skills training through the UN Women-UNODC joint programme on how to sew. “I want to be a tailor. I’m still learning, but I feel hopeful about my life now.”

The UN Women and UNODC joint programme is being supported by the Governments of Japan and Canada. Since April 2018, over 2,000 individuals have been reached under the programme including vocational training, legal support and awareness-raising on human trafficking across the Greater Mekong Subregion.