Art and advocacy: Young women speak up for political participation in the Philippines

“We are young, and we are women. It is part of our culture, that when you are young, you are perceived to know very little compared to older generations. And when you are a woman, you are expected to be weak and less certain than men” — Lovelle Diocess S. Lauzon, Sulu, the Philippines.

Manila, the Philippines — Art workshops, solidarity messages and video recordings are just some of the creative ways in which young women in the Philippines have come together to inspire themselves and their peers to build their political participation and stand up and have their voices heard.

With the support of UN Women, young women from diverse backgrounds across the country took part in a series of forums starting in September 2018 to build their political advocacy through discussions sessions, interactive quizzes, theatre and art to make clear that young women have a role to play in public and political life. 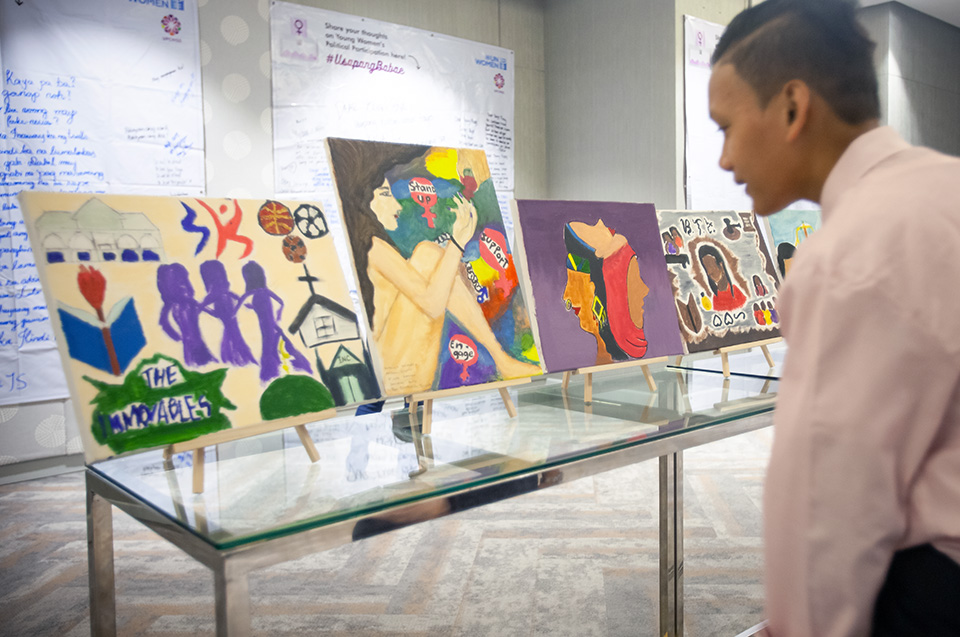 In recent years, the Philippines has achieved great success in advancing women’s participation in politics. The percentage of women elected into the national government increased from 15 per cent in 2006 to 27.2 per cent in 2016. But as the reflections of young women like Lovelle Lauzon show, this progress is not fast enough for young women to yet reap the benefits in a culture that underestimates their abilities to be leaders of change.In the 2016 elections, women outnumbered their male counterparts by almost two million voters. However, only 19.36 per cent of the running candidates were women, and out of these, less than a fifth were elected into office. This shows that while women are keen to engage in politics as voters, there are still significant social and cultural barriers to their participation being equally reflected as elected officials.

To reverse this trend, UN Women’s series of forums supported young women’s mobilization to build their skills and capacities as leaders of the next generation.

Partners including the University of the Philippines, the Generation Peace Youth Network, and the Coalition of Moro Youth Movement took part in workshops from Manila to Zamboanga City in Mindanao, culminating in a Young Women’s Congress, to strategize on advocating for the issues that are important to them as young women. 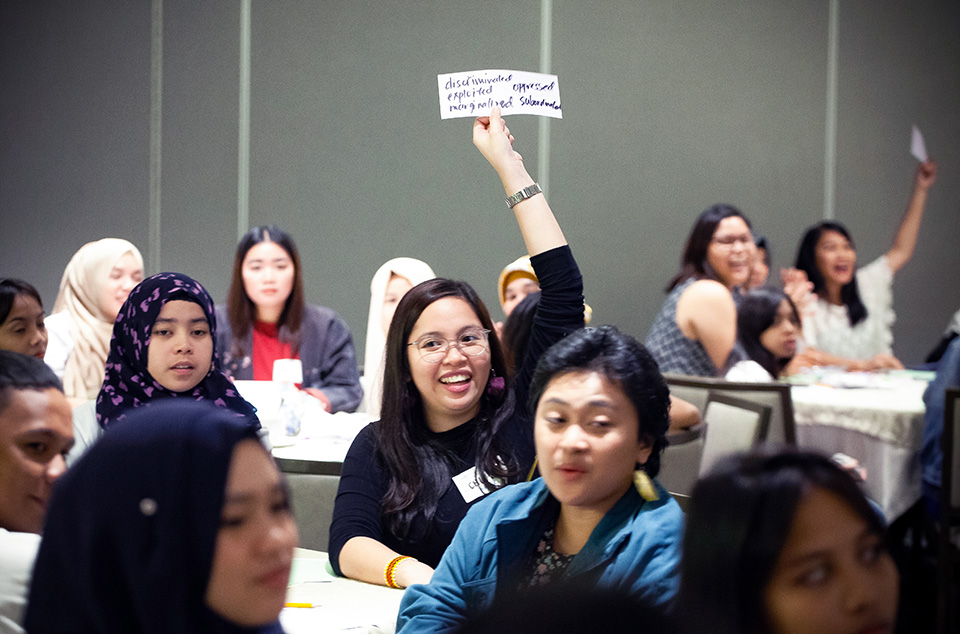 Gender stereotypes and social norms are among the greatest barriers to women accessing the same opportunities as their male counterparts. Noreem D. Datu, of Lanao del Sur, Mindanao voiced that such norms “discourage women. For instance, when they feel that their voices are not being heard – the risk is that they stop talking. That they stop expressing their opinions.”

To unlock restrictive, and deeply rooted gender norms is critical in breaking the barriers to women’s participation. Dawn Marie Castro, from the University of the Philippines, Manila, explained the importance of transforming traditional gender norms, so that women and men can be equally represented in politics - “women and are just as capable as men. Sometimes women’s issues are invisible to men, which is why we need women’s representation”. Radzma J. Julhiji from Tawi-Tawi added “even though we are not politicians, we are always involved in politics”.

Esmeralda Dacanso from the Generation Peace Youth Network, reflected that women’s participation in politics is about achieving more balanced and equitable policy outcomes for the whole of society. She stressed “women’s participation in politics affects both the range of policy issues that are considered, and the types of solutions that are proposed”. 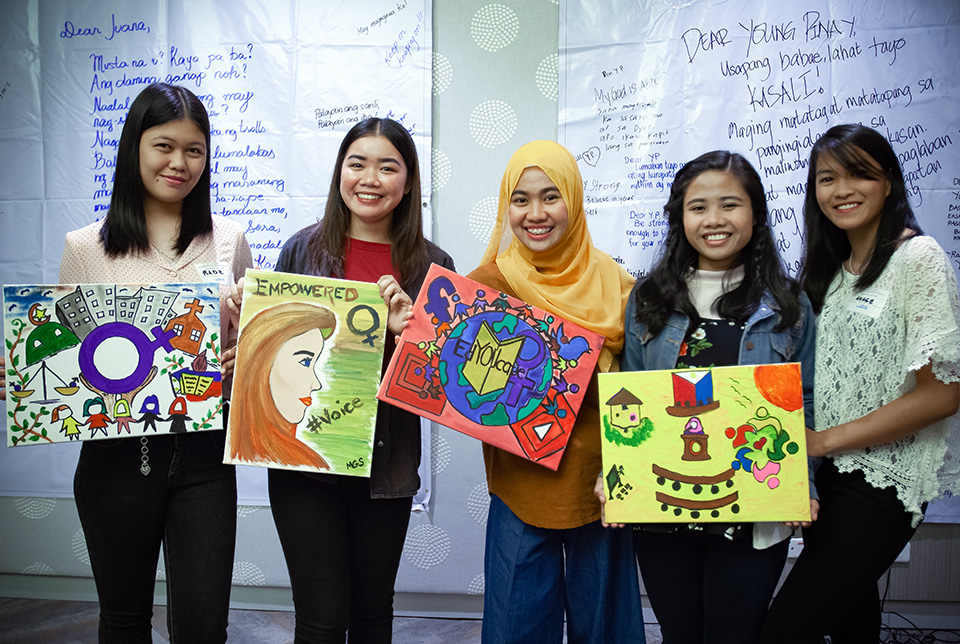 Carla Silbert, Officer-in-Charge of UN Women Philippines, echoed these views of the young women and encouraged them to claim their space in public life in whatever ways are important to them, emphasizing that “political participation is not just about voting or contesting elections – far from it. It is about claiming and raising your voice from schools and universities, to advocating for the issues that matter to you”.

Images spoke just as loud as words through the paintings made by the young women in the art workshops, with each visualizing ways forward for young women’s empowerment and participation. Symbols such as the national flag of the Philippines, women holding hands, and keys unshackling women all provide powerful messages of how the women envision their futures. Values of solidarity, respect and inclusiveness, regardless of cultural background, religion, gender identity and age, were emphasized as key values in pushing for women’s collective empowerment.

The paintings were later exhibited in the Young Women’s Congress, together with their written solidarity messages. The participants, as one group, drew up their own pledge as a commitment to young women on how to empower each other:

We pledge to support each other despite our differences.
We promise to be each other’s shelter and shadow.
We will ceaselessly fight for truth and gender justice
To give a voice to those we cannot speak for themselves
And to stand up for the underrepresented.
We draw strength from the history of strong Filipinas
As we look forward to a future shared with
a Global Sisterhood of Empowered Women. 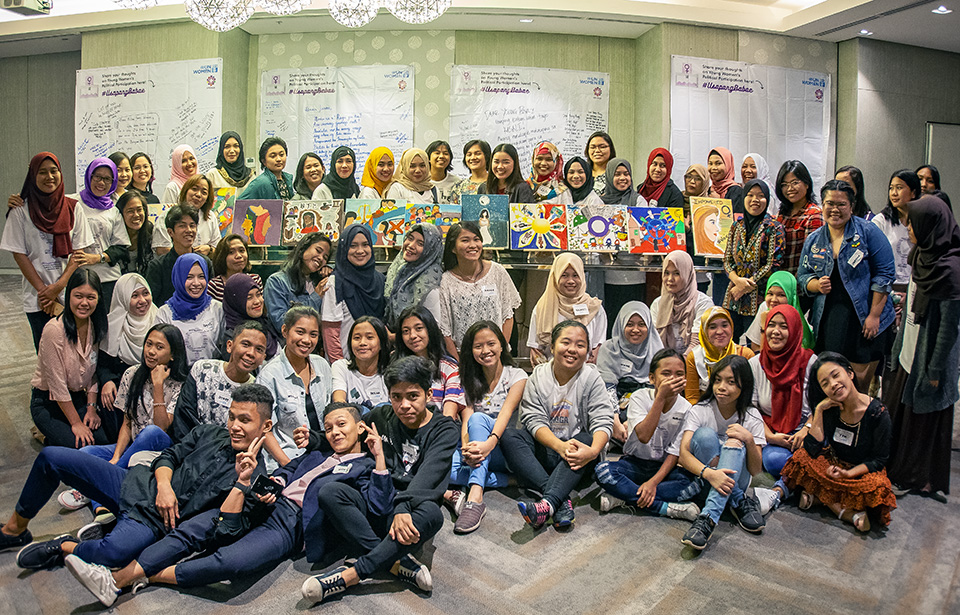