Suva, Fiji — Faith-based activities in Fijian communities are expected to contribute to preventing violence against women and girls as part of House of Sarah’s new Preventing Violence Against Women in Fiji’s Faith Settings (PVAWFFS) initiative. 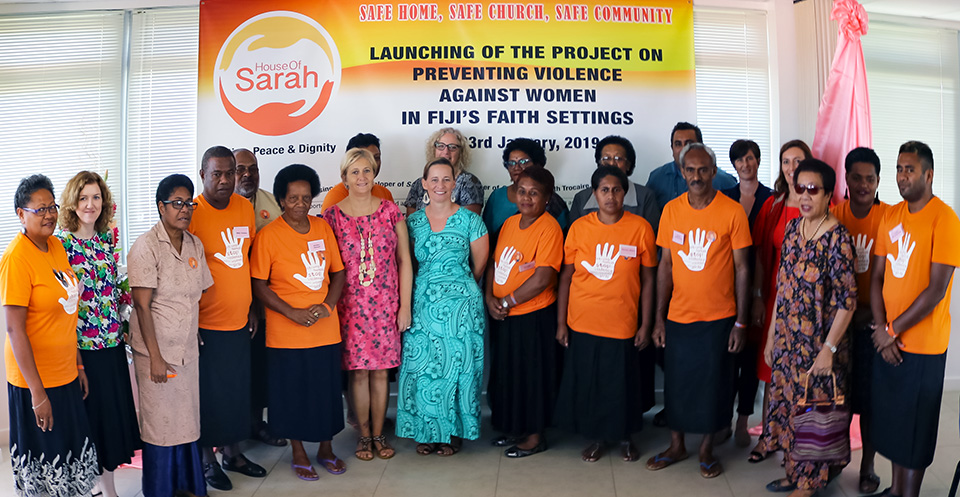 To implement the project, an agreement was signed between UN Women Fiji Multi-Country Office (MCO) and the House of Sarah, which is leading pilot testing in three Anglican communities at St Mark’s in Newtown, St Michael and All Angels in Matata, and St John the Baptist in Wailoku.

“The PVAWFFS project uses faith-based approaches to encourage gender equality and stop violence against women and girls that is often accepted as normal – a ‘social norm’ – in Fijian society,” said Reverend Sereima Lomaloma, Chairperson and Trustee of the House of Sarah.

“This community-led project encourages everyone in the community to reject violence and stop it from being accepted as a normal part of life, by committing themselves to acquiring knowledge, changing their attitudes and behaviour, in order to build and strengthen communities based on justice, peace and dignity,” she said. 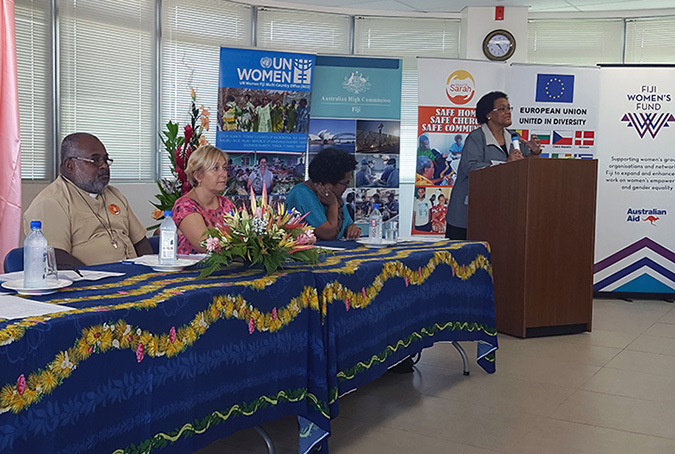 “This is achieved by engaging women and men, girls and boys, cultural and religious leaders, local officials, police, health-care providers and others to reflect on their own lives and relationships and how gender and power relations and some of the common misrepresentation of the Bible can perpetuate violence.”

“The commitment by Church leaders, community members and partners to advance the recognition of power dynamics and relationships within the communities will enhance positive changes in the homes, in the church and the community,” Reverend Sereima said, adding: “Religious teachings tell us we ’are all one in Christ Jesus’ so we should respect each other equally, men and women, and reject disrespectful and violent behaviour as being unacceptable in our villages and in our homes.”

For the PVAWFFS project, House of Sarah is adapting and implementing the internationally recognised SASA!Faith approach with technical assistance from UN Women and Raising Voices, the Ugandan-based non-profit organization that developed SASA! and co-developed SASA!Faith in partnership with Ireland-based Trocaire. The evidence-based SASA! approach has proven to reduce levels of violence against women, with Fiji being one of many countries around the world adapting it.

Today’s national project launch is being held at the Anglican Diocese of Polynesia’s House of Sarah head office in Suva. Speaking at the launch, Michelle Reddy, Fund Manager for the Fiji Women’s Fund, said: “The SASA!Faith model is an innovative program that looks at engaging women, men, boys and girls in working towards eliminating violence against women.”

“The Fiji Women's Fund is extremely proud to support the House of Sarah in the development and adaptation of this model to suit the communities who belong to the Anglican Church. Engaging with faith-based organisations in bringing about transformative women's empowerment is vital and we look forward to learning about the House of Sarah's journey in this project,” Ms Reddy said.

Speaking at the launch Ingrid Swinnen, European Union Team Leader, Natural Resources and Governance, said: “The European Union is strongly committed to gender equality, the empowerment of women of all ages and the elimination of all forms of violence against women and girls around the world.”

“Faith-based groups have an essential role to play in shaping the perception of gender roles in the Pacific and to challenge attitudes and behaviours,” Ms Swinnen said.

We commend the House of Sarah project and its ability to work directly with individuals and communities to consider the influence of social norms, attitudes and behaviours in preventing violence against women and girls,” she said. 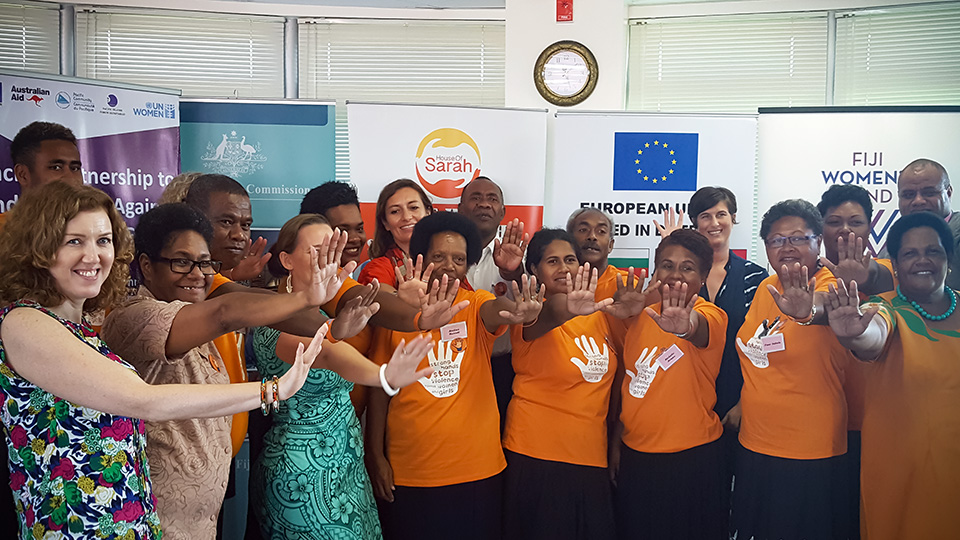 Australia’s Counsellor for Development Cooperation for Fiji and Tuvalu, Christina Munzer, said: “Australia is proud to support this initiative. Pacific faith-based organisations are central to life in the Pacific and are uniquely placed to inform both community and individual attitudes to violence against women.”

Supporting faith-based approaches to promote gender equitable social norms at individual and community levels is one of several key focus areas for UN Women Fiji MCO, which is implementing one of the three outcomes areas of the Pacific Partnership.

UN Women Fiji MCO Deputy Representative, Sarah Boxall, said: “UN Women is pleased to be part of the Pacific Partnership, and in particular to work together with House of Sarah to assist with the adaptation and implementation of this approach to prevent violence against women and girls.”

“This community-led programme is particularly exciting, as people commit within their own villages and faith communities to shift their attitudes to encourage positive behaviours to improve gender equality and to end violence against women and girls,” Ms Boxall said.

The Pacific region has some of the highest rates of violence against women recorded in the world – twice the global average with an estimated two in every three Pacific women impacted by gender-based violence. Along with high rates of violence – a violation of human rights – women and girls in the Pacific region experience constant and continual inequalities including low levels of participation in decision making, limited economic opportunities, restricted access to sexual and reproductive health and [other] rights.

To achieve this, the Pacific Partnership aims to transform the social norms that allow violence against women and girls to continue; to ensure survivors have access to quality response services; and to support national and regional institutions to meet their commitments to gender equality and prevention of violence against women and girls. Working through partners, it will promote equal rights and opportunities for all Pacific people, through innovative approaches to education, access to essential services, and policy development.

The EUR 19.5 million partnership is primarily funded by the European Union (EUR 12.7 m) that supports all three outcome areas of the programme, with the Australian Government providing targeted funding to the second outcome (EUR 6.2 m) supported by UN Women (EUR 0.6 m).

Related News
08/03/2022
UN Women Fiji MCO and Oceania Football Confederation ‘kick-off’ new partnership to progress gender equality and address violence against women and girls.
22/12/2021
Press Release: Ministry Welcomes ICT Boost to Progress Gender Equality in Fiji
01/12/2021
Launch: Gender-Based Violence Counsellor Training Package for the Pacific
30/11/2021
In the words of Reverend Jone Tuiwaiwai: “There are things that God gave us that we cannot change, but our social roles is not one of them.”
30/11/2021
In the words of Sani Daoni: “I struggled with people who had power over me. Still, I was using the power to control people closest to me.”
END_OF_DOCUMENT_TOKEN_TO_BE_REPLACED