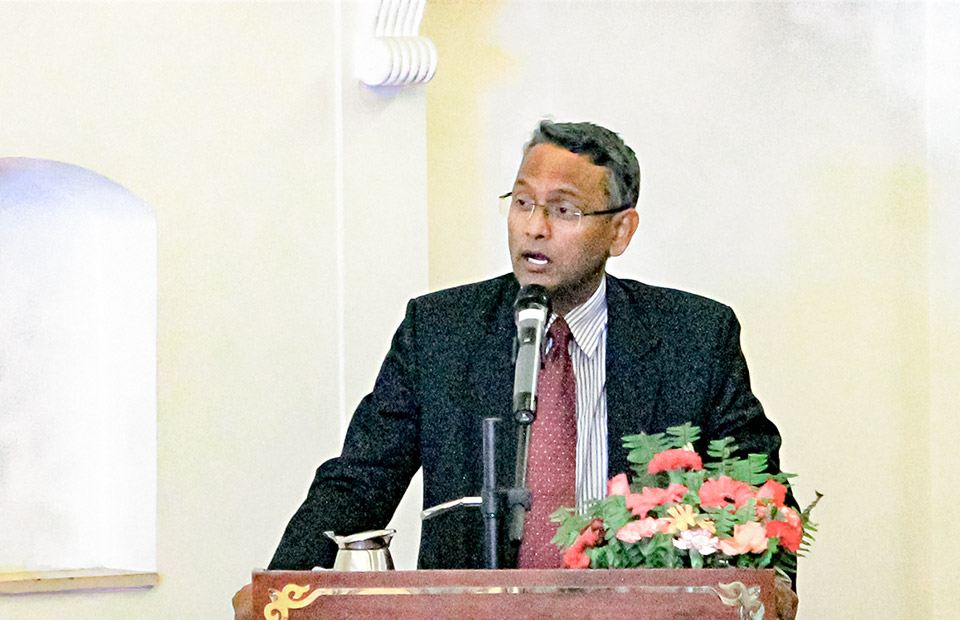 Chandra Kumar Ghimire is Secretary of the Ministry of Women, Children and Senior Citizens (MoWCSC) of the Government of Nepal. Under his leadership, the MoWCSC held a National Consultation on the Beijing+25 Work Plan and National-Level Review Report on 28 April 2019. The consultation brought high-level officials from different line ministries together with civil society representatives to discuss the Government’s five-year review. He discusses the role of various mechanisms and bodies in ensuring gender equality.

What opportunities does federalism offer in advancing gender equality and women’s empowerment?

Nepal’s transition from a unitary to a federal system has paved the way for the formulation of legal and policy reform, as well as restructuring and the establishment of mechanisms and organizations. We are still in the process of transferring funds and deploying civil servants to the sub-national levels. We believe that the new system of governance will be more effective for ensuring inclusion. The government will now benefit by having elected representatives and government officials at the sub-national levels where they can work in close proximity with the community. As a result, local governments could be more responsive and accountable to the concerns of women and marginalized groups. In this way, the new governance system ensures an increased engagement of government officials in the area of gender equality and women’s empowerment.

How will the 2018 Concluding Observations for Nepal made by the Committee on the Convention on the Elimination of all Forms of Discrimination Against Women (CEDAW) be addressed in the 15th National Plan?

We are working on applying the CEDAW recommendations to our policies and laws. The 15th National Plan, that is currently in its final stage of completion, will be used as a vehicle to take those policies forward. All three levels of governments will draw from the 15th plan in setting policies and programmes on gender and women’s rights in their plans. This is how we are currently moving forward.

Although the Constitution of Nepal guarantees gender equality and non-discrimination, its implementation remains a challenge. What is the Government doing to ensure effective implementation of laws to address gender discriminatory norms and harmful practices?

Since the 2015 Constitution was promulgated, we have drafted more than 200 laws that are in line with the new Constitution, as well as with national and international commitments, such as CEDAW. However, effective implementation of those laws remains a challenge. The federal system has enabled power-sharing among the three tiers of government, giving exclusive and concurrent powers to each tier. Therefore, new laws will be formulated and implemented through collaboration and cooperation among all three levels of governments. Issues such as harmful practices and discriminatory social norms will be addressed, for example through initiatives on economic empowerment and social transformation. All three levels of governments will move forward together to tackle the problems related to harmful and discriminatory practices that remain key bottlenecks for achieving gender equality and women’s empowerment.

How do you see the role of the National Women’s Commission (NWC) in ensuring that the Beijing Platform for Action (BPfA) commitments are implemented?

The National Women’s Commission is the constitutional body that is responsible for eliminating gender discrimination. The NWC advises the Government on various areas of concern relating to women’s rights. It makes recommendations to policymakers upon conducting oversight. NWC is also the official body for keeping an eye on effective implementation of treaties and covenants in Nepal. For that reason, it has a very important role to play in ensuring an effective implementation of BPfA commitments.

How do you see the partnership of the Government of Nepal with civil society and the private sector creating an enabling environment for women’s empowerment?

The Constitution of Nepal is considered exemplary, particularly from the perspective of gender and inclusion. However, the Government alone cannot ensure effective implementation of laws and policies. It requires a concerted effort from all quarters, including non-governmental organizations and private sector actors, to translate the commitments of gender equality and women’s empowerment into action. Therefore, the MoWCSC seeks to work with non-governmental sectors, including media, to create synergies in policymaking, institution-building and implementation.

Related News
03/12/2014
Widows continue to face severe stigma and discrimination
08/09/2021
Take Five: Continuous advocacy is critical for achieving gender equality in citizenship and ending discrimination against women both in law and practice
27/01/2021
UN Women supports efforts to improve LGBTIQ rights in Nepal
13/11/2019
Beijing +25 CSO National Reviews to commemorate the 25th anniversary of the Beijing Declaration and Platform for Action
04/06/2018
Advancing the partnership for gender equality and women’s rights in Nepal with the Ministry of Women Children and Senior Citizen
END_OF_DOCUMENT_TOKEN_TO_BE_REPLACED