From where I stand: “I created ‘Under the Ropes’ as a platform to discuss gender discrimination in the world of Muay Thai and beyond”

Emma experienced an attempted rape in a Muay Thai gym and witnesses gender discrimination in the world of sport every day. She fights gender-based discrimination and violence against women through her writing and advocacy. 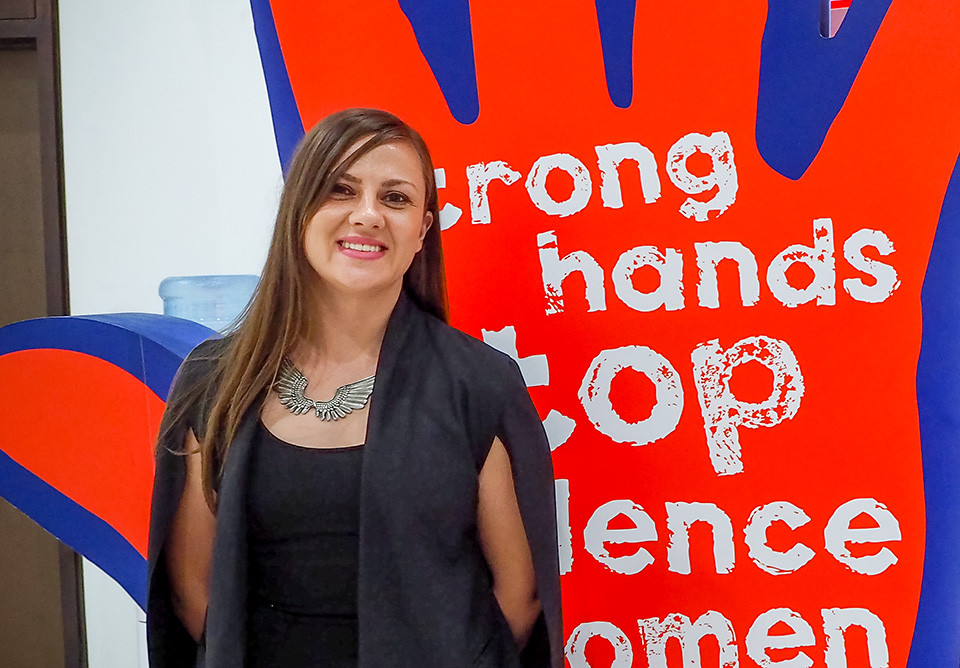 “Muay Thai has been so empowering for me, but at the same time, it’s also shown me over and over again that as a woman, I am not viewed as equal to the men I share the gym space with. While male fighters enter the ring by going over the top rope, female fighters have to crouch down and crawl underneath the bottom one. Then there are rings which we are not allowed to enter at all. At the most prestigious stadium in Thailand you will see signs that say ‘ladies, do not touch the ring’.

Being a female fighter, in my experience, can be very isolating. My way of combatting that was to write about it. In 2013, I built a website called Under the Ropes, where I started writing about how much I loved fighting, how much it helped me grow, and what it was like to be a woman fighting in Thailand. That also meant writing about how I wasn’t treated the same or afforded the same opportunities as the men I trained with every day, and how I was sometimes paid half as much as them for fighting on the same shows.

“At the most prestigious stadium in Thailand you will see signs that say ‘ladies, do not touch the ring’. [..] Today I’m a member of Bangkok Rising, an advocacy group that raises awareness of gender-based violence.”

I also wrote about how very early in my career, in one of the first gyms I ever visited in Thailand, I narrowly escaped an attempted rape by my own trainer. And how, when I spoke up about this, the men around me responded with a strange mixture of blaming me, bullying me, completely ignoring me and trying to sleep with me.

The takeaway from this is not that Muay Thai is dangerous for women. The world is dangerous for women, and what happened to me happens everywhere. It happens anywhere that women are viewed as somehow less than men. And that includes the spaces where we seek safety and community and empowerment.

When I shared my story, I was overwhelmed by the response from other women who reached out to me and said, ‘this happened to me, too.’ I was also contacted by the British Embassy who said, ‘we read your story and we need to change how we respond to cases of rape and sexual assault in Thailand – Can we talk?’ Since then, I've never second-guessed raising my voice.

I don't think that women should have to bare our most traumatic experiences in order to create change. But when we do, and when people listen, amazing things can happen. That’s why community and support are so important.

Today I’m a member of Bangkok Rising, an advocacy group that raises awareness of gender-based violence. There, my role is to make combat and strength sports more accessible to women and girls. I also collaborate with UN Women to organize outreach activities to change social norms, and am partnering with the British Embassy to give rape survivors better access to much-needed services. I’m also currently developing strategies to tackle gender discrimination and rape culture in Muay Thai. I hope to make changes that hold perpetrators of sexual assault accountable, so cases like mine can be avoided.”

Emma Thomas, 30, is a Muay Thai fighter, powerlifter, blogger and activist in Thailand. She is a participant of UN Women-led campaigns and advocacy events, including “The Vagina Monologues” performance as part of UNiTE campaign, HeForShe University Tour and others. Her work supports Sustainable Development Goal 5, which aims to promote gender equality and end violence against all women and girls.

Related News
08/03/2022
New UN Study says Fear, Violence, and Isolation Prevents Myanmar Women from Accessing Income and Healthcare
15/03/2021
I am Generation Equality: Net Supatravanij, Thai social entrepreneur and activist against gender-based violence
10/03/2021
This is what leadership looks like: Nan Zar Ni Myint empowers migrant domestic workers in Thailand amidst the pandemic
10/12/2020
Ending violence against women cannot be done by one sector alone
09/12/2020
“It fulfils and motivates me when they say ‘Thank you’, when I see them empowered, knowing where to seek help.”
END_OF_DOCUMENT_TOKEN_TO_BE_REPLACED