Kathmandu, Nepal — Amid a dizzying array of dialects and attire reflecting Nepal’s rich regional and ethnic diversity, over 700 women local government leaders and representatives of District Coordination Committees from across the country gathered at City Hall in Kathmandu on 30 May (Jestha 16 in the Nepali calendar). On this day in 2006, the current President of Nepal, Bidhya Devi Bhandari, then a lawmaker, presented a resolution before the House of Representatives demanding at least 33 per cent representation of women in all the state mechanisms. The proposal was endorsed that same day. To mark this important milestone in Nepali history, the Cabinet decided in May 2019 to celebrate Jestha 16 as National Women’s Rights Day. 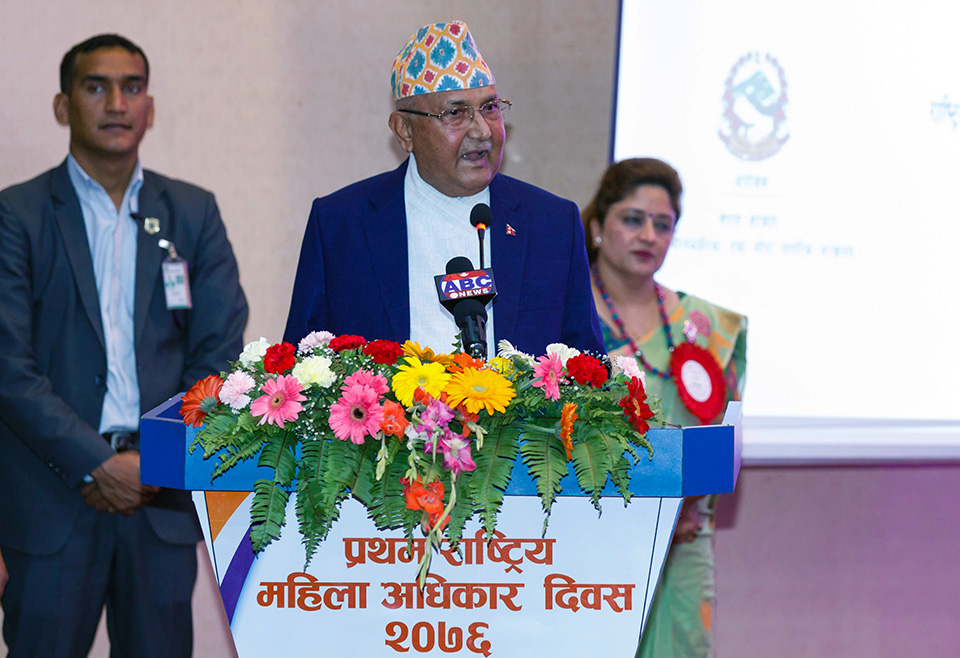 Prime Minister of Nepal, KP Sharma Oli, was the chief guest of the event. “The progressive provisions in our Constitution are not there by coincidence – they were done deliberately, and we shall implement them effectively,” promised PM Oli. Photo: UN Women/Laxmi Maharjan

“Every year we celebrate different international days, but I believe that it is equally important to celebrate our own accomplishments as a nation and remember our achievements in advancing women’s rights in the country,” said Anju Dhungana, Chief of the Women’s Development Unit at the Ministry of Women, Children and Senior Citizens (MoWCSC).

The national-level event was jointly organized by MoWCSC and the Association of District Development Committees in Nepal, with support from UN Women. Prime Minister KP Sharma Oli was the most notable guest of the event, which equally marked the Government’s official declaration of 2076 (2019-2020 AD in the Christian calendar) as the year for campaigning against gender-based violence.

“The strides we have made in gender equality will be insignificant if we are unable to eliminate violence against women,” said Tham Maya Thapa, Minister of Women, Children and Senior Citizens. The 2006 resolution also included provisions to address gender-based violence and discriminatory laws, such as the right to citizenship through either one’s mother or father. However, not all of the provisions have been enacted and discriminatory laws remain – including barriers to citizenship for children born to Nepali mothers and foreign fathers, particularly when fathers refused to acknowledge their relation. 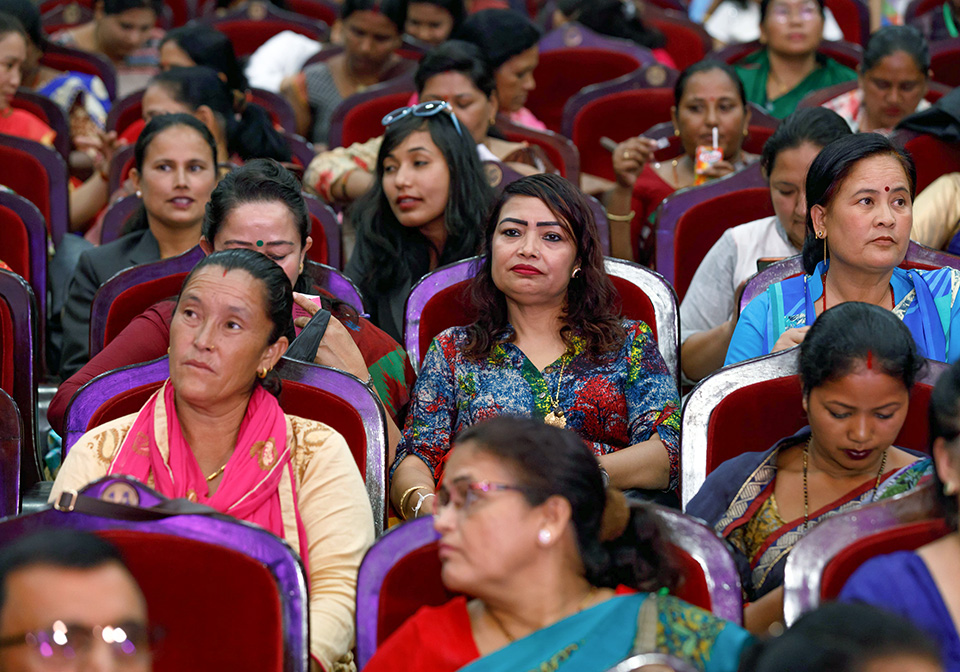 Over 700 women leaders from all over the country attended the event. Photo: UN Women/Laxmi Maharjan

However, despite this achievement, power imbalances and challenges for women persist. For instance, despite unprecedented representation of women in local governments, the leading positions as mayor of a municipality or chairperson of a rural municipality are still overwhelmingly dominated by men – with only 2 per cent of those positions occupied by women. Around 91 per cent of the deputy positions in local governments are held by women.

“It is important to have women in leadership positions so that they can raise the issues of women,” said Sabina Rai, a member of the District Coordination Committee, for Bhojpur District. “Male leaders may talk about women’s issues to some extent, but it is more effective when women voice their own issues and are in a position to make policies and decisions that concern them.” 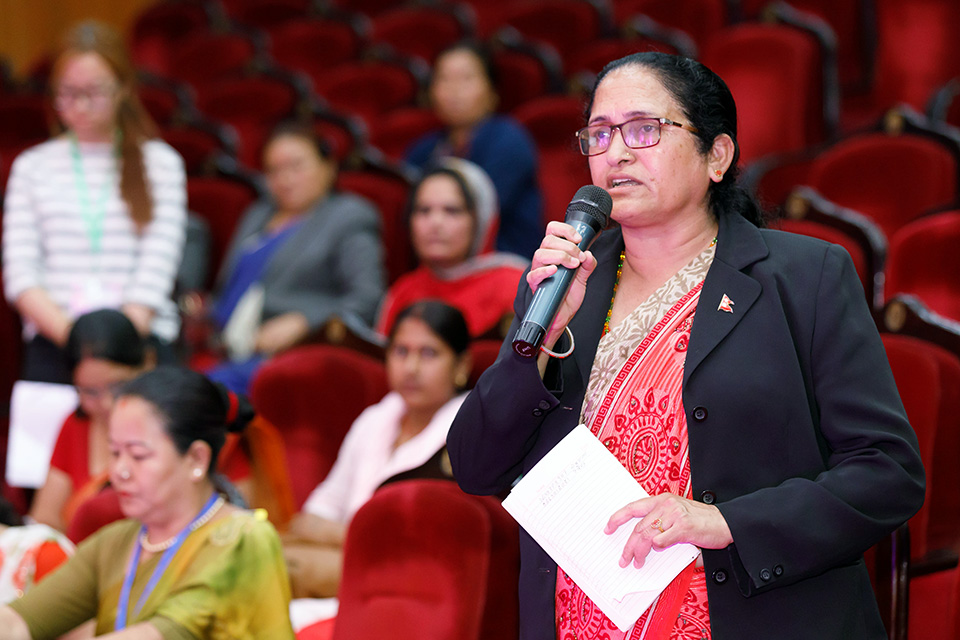 Out of the 293 mayors of municipalities and 460 chairpersons of rural municipalities, only 18 of us are women,” said Sima Chhetri, Mayor of Putalibazar Municipality, Syangja District, during the interaction with political leaders. Photo: UN Women/Laxmi Maharjan

Violence against women in politics is also prevalent in Nepal. According to a 2010 study by Action Aid, 23 per cent of women candidates faced violence in Nepal’s 2008 elections. Moreover, women from the most vulnerable backgrounds – such as those from minority ethnic groups and the poorest economic classes – are more likely to face violence in politics, according to a 2014 report by UN Women.

Elected women leaders regularly face sexism in the workplace and their leadership is often undermined. According to a 2018 report by The Asia Foundation, 53 per cent of elected female representatives indicated that they have faced challenges at work.

“We do not get consulted before important decisions are made, even on important matters like budget. Our advice is rarely sought,” said Sita Kumari Yadav, Deputy Chair of Aurahi Rural Municipality, Siraha district.Several elected leaders highlighted that while the Constitution guarantees the rights of women, these rights are yet to be effectively implemented. Alongside the effective implementation of laws, developing women’s ability to lead and creating an enabling environment for women’s meaningful participation are key to overcoming the challenges faced by women leaders.

Addressing this need, UN Women has supported several programmes to develop the capacities of women leaders. In the 2017 local elections, several women who took part in a leadership programme supported by UN Women contested different positions, and seven of them won. UN Women also supported the Hamro Netritwa project in 2018 to enhance the capacity of elected women representatives to better advocate for and integrate gender equality and social inclusion into laws, plans and policies, at all levels of decision-making.

“Women have been left behind, not because they are incapable, but they were made incapable,” said Rai. “The State needs to step up and build the capacity of women to be effective leaders.”