Tongan youth-led solutions to reduce violence against women and girls

Nuku’alofa, Tonga — The new ‘Front Row Against Violence’ project led by Talitha Project in partnership with UN Women will target youth and sports to ensure girls in Tonga are empowered, have equal access to opportunities, and live free from all forms of violence.

The Talitha Project partnership with UN Women Fiji Multi-Country Office (MCO) is supported by the EUR19.5million Pacific Partnership to End Violence Against Women and Girls programme funded by the European Union (EUR12.7m) and Australian Government (EUR6.2m) with support from UN Women (EUR0.6m). 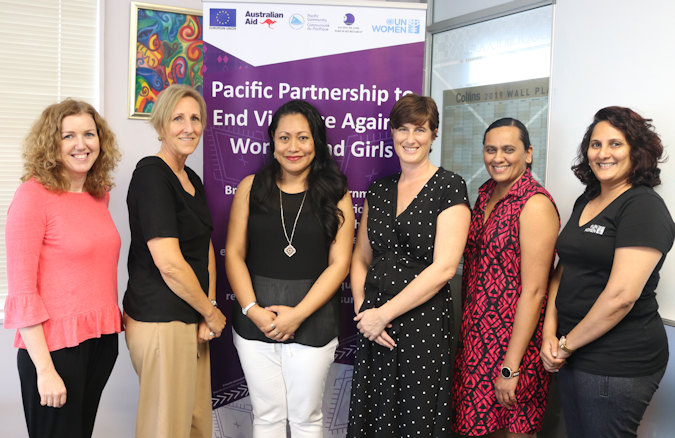 The primary focus of the ‘Front Row Against Violence’ project will be young girls and boys aged 14-18 years through youth activism initiatives, and young women aged 18-30 through sport, especially rugby.

“With 68 per cent of Tongan women having experienced physical violence by a non-partner since age 15 -   in a nation with a median age of 22 years and almost 40 per cent of the population aged under 16 years - it is evident that adolescents and young girls in particular are very vulnerable to all forms of violence,” said Talitha Project Director, Vanessa Heleta.

“That’s why Talitha’s new project, in partnership with UN Women and with the support of the Pacific Partnership to End Violence Against Women and Girls, is targeting youth and using sports to encourage a positive shift in attitudes and behaviours,” Ms Heleta said.

Tonga is a focus country for the Pacific Partnership that brings together governments, civil society organisations, communities and other partners to promote gender equality, prevent violence against women and girls (VAWG), and increase access to quality response services for survivors.

“There is wide acceptance and global evidence that proves shifting social norms is critical to the long-term, sustainable achievement of gender equality and ending the cycle of violence against women and girls. For the prevention of violence against women and girls, there needs to be a shift in people’s attitudes and beliefs to reject such violence as unacceptable in their society,” said UN Women Representative, Sandra Bernklau

“Talitha does great work with adolescents and young girls, and in particular targeting youth and sports, to encourage a positive shift in social norms,” Ms Bernklau added. 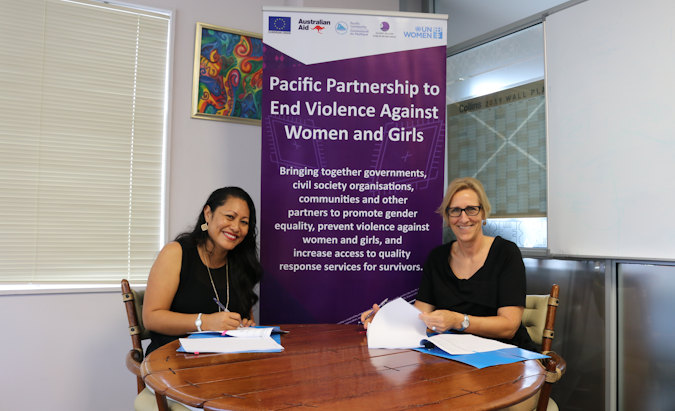 Through this intervention Talitha will trial several new youth and sports approaches, including youth led activism for which young girls and boys will be empowered to become activists and promote healthy, respectful and safe relationships in their schools and community. The second key area of intervention will support young women and girls to have safe and equitable access to rugby in non-government schools and clubs, and to increase their leadership roles in sports decision-making bodies.

These and other activities aim to equip key individuals involved in rugby, with the skills and knowledge needed to encourage equal access to sport for both girls and boys, and to challenge violent attitudes within sports, while modelling positive behaviours and attitudes.

The project will be implemented by Talitha Project over three-years, from 2019-2021, with technical and funding support from UN Women Fiji MCO, through the Pacific Partnership.

The project marks a continuation of work between Talitha Project and UN Women; previously working together under the Pacific Fund for Talitha Project’s ‘My Body My Rights’ program to support girls to have increased awareness, rights and control over their bodies and their lives, and to become empowered leaders in their families and communities.

Related News
08/03/2022
UN Women Fiji MCO and Oceania Football Confederation ‘kick-off’ new partnership to progress gender equality and address violence against women and girls.
22/12/2021
Press Release: Ministry Welcomes ICT Boost to Progress Gender Equality in Fiji
30/11/2021
In the words of Sani Daoni: “I struggled with people who had power over me. Still, I was using the power to control people closest to me.”
30/11/2021
In the words of a survivor who now helps other survivors: “After 19 years, I woke up. I stood on my own feet.”
30/11/2021
In the words of Reverend Jone Tuiwaiwai: “There are things that God gave us that we cannot change, but our social roles is not one of them.”
END_OF_DOCUMENT_TOKEN_TO_BE_REPLACED