From where I stand: “If Nepali women are allowed the freedom to pursue what they need and what they want, they will be able to flourish in their lives and eventually uplift their communities.”

Ishani Shrestha, 28, is a social activist and entrepreneur in Nepal. After she was crowned Miss World-Nepal 2013, she founded Project Smile to improve women’s health and children’s education and to end gender discrimination. 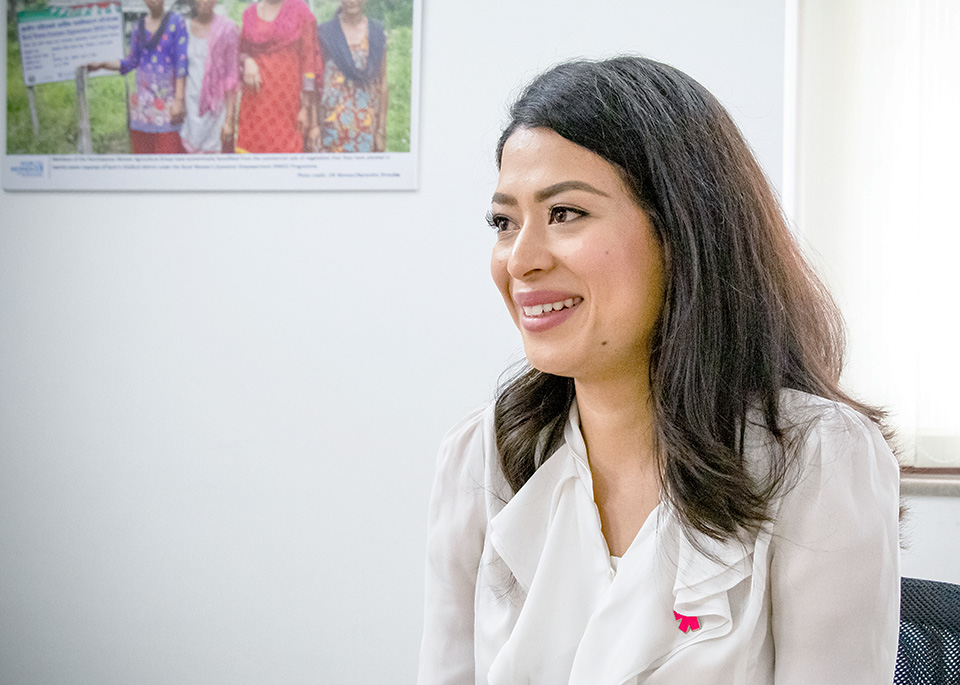 I was born in Kathmandu to parents who were and are liberal and loving, but to a society that puts extra-ordinary barriers and pressures on girls and women. Sexist stereotypes limit women in their careers, education, health and lifestyles.

I grew up watching the Miss Nepal show. Back in the days when women were not visible in the media or in public, I admired the contestants not only for their glamorous appeal, but also as women who had a strong voice in our community. It was one of the very few platforms where women and their talents were encouraged and praised. I knew I wanted to become a “woman-platform” to help break the many barriers that stood between Nepali women and their dreams. After I became Miss World-Nepal 2013, this led me to work closely with underprivileged communities where women and children were not given priority even in terms of their basic human rights.

As a feminist and a Nepali woman, I see the uncountable challenges girls and women face in our country. Some of the major challenges that I want to help ease are the lack of awareness of human rights, the lack of education and access to health care, and the social stereotypes that restrict women from becoming who they want to be.

These restrictions go beyond the rural areas and even affect women like me from the “modern” city. For example, the practice of Chhaupadi, or menstrual huts, is illegal but you see these huts in rural areas being used to separate girls and women from their homes. Girls and women are considered “impure” when they are menstruating and so they are segregated from their own families. In the villages, many girls and women already risk losing their lives to poor hygiene, health conditions, weather and even threats of wildlife. Chhaupadi only worsens this risk.

Chhaupadi is also prominent in the city. Women and girls are barred from kitchens, social functions, prayer rooms and common spaces, even from touching water.

The top priorities for improving the lives of women and girls in Nepal are awareness of and access to health care, education and careers. If Nepali women are allowed the freedom to pursue what they need and what they want, they will be able to flourish in their lives and eventually uplift their communities. We must let them know about their human rights and the right ways to use these rights. We must spread the knowledge that mothers are equal to their fathers, wives to their husbands, daughters to their sons, and women to men.

Through my efforts with Project Smile, I hope to keep lending a voice to whatever empowers women and children and uplifts our communities.”

Ishani’s Project Smile helps women and children in rural areas of Nepal. Its first project was a dental health camp in Jumla district in far-western Nepal. After Ishani won the title Beauty with A Purpose, Project Smile expanded to include several more dental health camps, rebuilding of schools, distribution of school supplies and women’s camps focused on sexual and reproductive health and uterine prolapse. Ishani’s next project is to build 100 playgrounds in schools in rural areas. As a feminist, entrepreneur and pageant winner, she wants to end unequal Nepali customs such as Chhaupadi and to show people that Miss Nepal winners are more than their crowns and fancy evening gowns. Her work supports Sustainable Development Goal 5, to promote gender equality and end violence against all women and girls.