The invisible issues in flood response 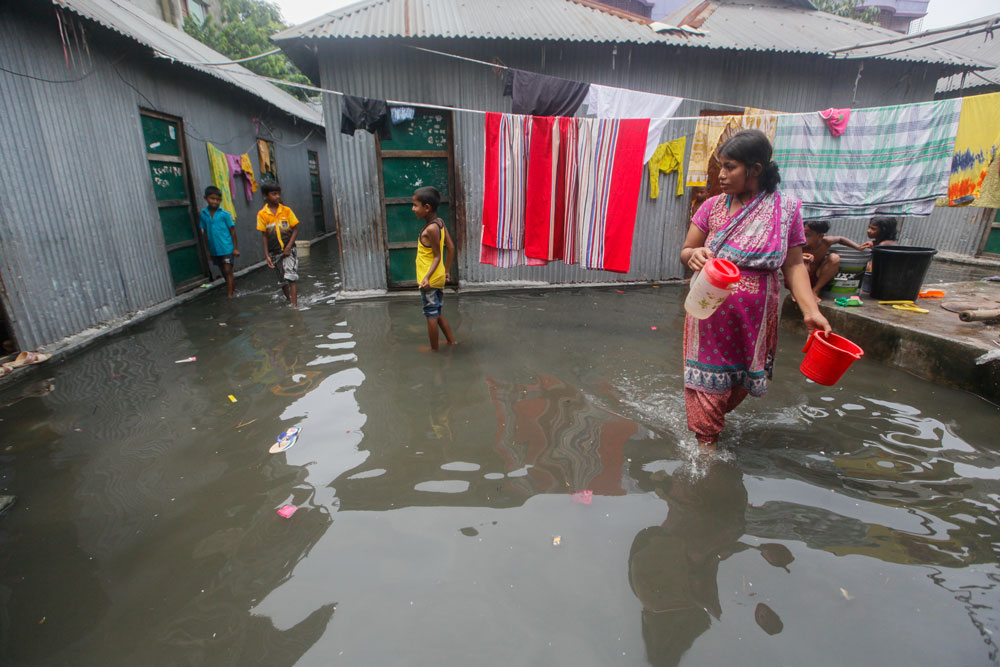 A sympathetic response is called for. Photo: Dhakatribune/Mehedi Hasan

“When the husband doesn’t get the meal coming back home, he’ll hurl abusive words, that’s only normal. So during the flood, when the family went without food, it was common. Sometimes it was too much. I wanted to retort but couldn’t, fearing his beating. Since I couldn’t run away to escape his beating, with water all around. If I did snap at him sometimes, he would beat me and not give money for food for days.”

Selima Begum from Nimkusharpar village at Pachgachi Union of Kurigram Sadar was narrating the plight women endured during the last monsoon flood that brought untold sufferings to women in her village.

The last monsoon flood in July 2019 inflicted 28 districts of which Kurigram, Jamalpur, Gaibandha, Sirajganj, Sunamganj, Bogra, and Bandarban were particularly hit hard. More than a hundred people lost lives and more than 7 million people were affected.

I asked Selina if the husband didn’t give money for food, how did she eat? Snap came the answer: “Oh, what is it to him, he would sit in the tea stall, sip tea, and munch biscuits all day.” Selina said she lost 25 chickens and two goats. “What do I do, do I catch my children or the chickens from being swept away with flood water? After flood, I couldn’t feed the goats. There wasn’t any fodder and the goats died.”

I was talking with a group of women at the Nimkusharpar village. The women told me how they struggled with the flood. They faced problem, with cooking. There was hardly any dry fuel wood, or stoves.

When they were at makeshift flood shelters at school, or Union Parishad building or at embankments, several families would take turns to cook one meal in the few available stoves.

They stayed initially at their own house erecting a dhorna which is a kind of platform beneath the roof, but when the water level kept rising and the current grew stronger they couldn’t dare to stay there; instead went to shelters. That was difficult since there were not many big boats; smaller boats couldn’t ply in that strong current. So the few big ones would charge high to transport them to shelters; depending on family size they would charge Tk200 to Tk500.

A big problem was sanitation and hygiene. During the flood (15 days of inundation) since all the latrines were under water, the women would eat and drink minimum, fearing the need of defecation; they would wait for the dark for it. They defecated and bathed in the open water hoping the strong current helped them in such case.

However, as a result of drinking very little, most of the women afterwards suffered from urinary tract infection (UTI) and other such problems. The women were also complaining about the clothes being supplied to them by NGOs for menstrual management. They said washing and drying the clothes in crammed flood shelters was extremely difficult. They would have preferred sanitary pads.

Women complained about a lack of safety and security in shelters. After evening there were no lights which caused much anxiety amongst the women and girls. In Pachgachi Union, 14-year-old, intellectually impaired Ayesha (pseudo name) was squatting in a school with her grandmother. Her mother works in garments factory in the city.

One evening when her grandma went out of the shelter a man swooped in and took her to a dark corner under the staircase and raped her. A case was filed and the perpetrator was put to jail; but his family bribed the local influential people, and Ayesha’s grandmother, and settled the matter.

Ayesha is now kept out of sight.

These are some of the snippets of the struggles and gender-based violence of the last flood, and many other previous floods that women faced, that seldom made headlines.

After 2019 flood, the humanitarian community led by the United Nation’s Resident Coordinator’s Office with support from Need Assessment Working Group did a quick need assessment.

Based on that UN Women produced a Gender Analysis of the flood impacts.

Some of the recommendations made for immediate and mid-term recovery were:

The problems cited by the women from Nimkusharpar village are not unique; women from around the country endure such problems every time there’s a disastrous flood or cyclone. Our disaster management strategies and tools need to have women’s issues built in.