Officers of the Philippine security sector gathered in Manila to discuss needs of women and girls in cross-border situations. The five-day training in Manila aimed to strengthen a gender-responsive, survivor-centred approach to transnational crime investigations. It was hosted by the United Nations Office on Drugs and Crime (UNODC) and UN Women with support from the Government of Canada. 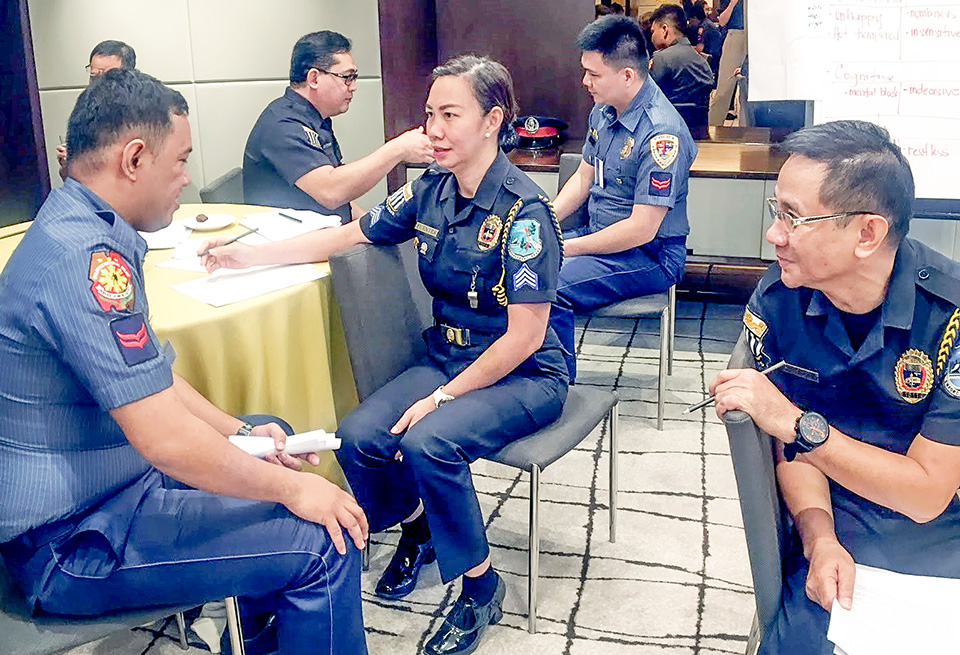 Manila, Philippines — Colonel Portia Manalad was the first female cadet to graduate from the Philippine Police Academy in 1995. Twenty-five years later, she is now the first woman police director of Cotabato city, but her journey was far from easy. “The challenges came one after the other, which made me believe that I created a stronger self, knowing that I had to make the double effort of men just to prove myself,” she said.

Colonel Manalad shared her story during a five-day training for the Philippines security sector hosted by the United Nations Office on Drugs and Crime (UNODC) and UN Women, with the support by the Government of Canada, on 25-29 November 2019. During the training, representatives from the Philippine National Police and the Bureau of Customs scrutinized gender stereotypes and explored gender-responsive and survivor-centred approaches to crime investigation.

Officer Maria Cristina Fuentes from the Bureau of Customs drew a parallel between Colonel Malanad’s story and her own. “In the beginning, women in the law enforcement and Bureau of Customs were not really included much in the operations like the men are,” she said. “One challenge is for me to prove that I am worthy of the job that they have given me.”

Officer Fuentes also addressed the double burden of being a woman in her profession. “One of the greatest challenges for me is society’s thinking that we are part of a corrupt agency, so we live with that emotion every day. But for me, as long as I do my job properly, I think I can survive that struggle”.

The training was part of a larger initiative carried out in South-East Asia, which seeks to both increase knowledge of community-centred and gender-sensitive policing, especially with regards to trafficking in persons, and to increase the role of women in law enforcement. Women and girls experience this cross-border crime differently and disproportionately to men and boys. 71 per cent of victims of trafficking globally are women and girls. Among female trafficking victims, 72 per cent are trafficked for sexual exploitation (Global Report on Trafficking in Persons, UNODC, 2016). This is despite sustained efforts, globally and in the Philippines, to address the incidences of human trafficking and to assist those who become survivors of trafficking overseas. 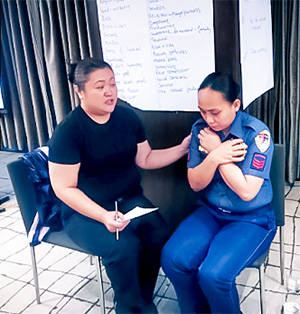 Guided visualisation exercises were an innovative element of the training and allowed the participants to tap into a deeper empathic understanding of coping mechanisms of survivors of violence and trauma. Part of this was making them aware of how reliving a memory can have a powerful, almost physical impact on someone’s senses. To demonstrate this, facilitator Stephanie Hill guided the participants to picture a lemon tree in fruit. As the participants were asked to take a bite of the imaginary lemons, their faces puckered, and many were surprised by the tangibility of the sensation.

“In the training room we only focus on positive experiences, but by exploring their own memories, participants can understand how the recollection of traumas may be experienced and recalled by survivors or witnesses of crime,” explained Hill. For many officers, the practical tools that were explored during the training to more deeply understand survivors’ needs and experiences were novel. They recognized that integrating survivor-centred and gender-responsive techniques could be critical for improving the effectiveness of their work.

Participants expressed a strong commitment to continue building on the insights and skills gained through the training, while also recognizing some of the challenges ahead. “Sometimes the strong person that others see is the product of hard work or an art that was brought by challenging situations,” said Colonel Manalad. “I might be challenged, tired, denied, ignored or confused but as a woman I am determined to be resilient.” said Colonel Manalad, summarising the determination of many of the officers going forward.

The final day of the training was wrapped up by discussing key lessons learned and identifying how they may be brought into the daily work of the participants. Photo: UN Women/Alexandra Håkansson Schmidt
Related News
22/12/2021
In the words of Police Lieutenant Colonel Melbeth Mondaya: “Protection and education for girls is especially important because they are the key to women’s empowerment.”
30/10/2020
From Where I Stand: “There is nothing I want more than a peaceful community where we can live in our ancestral domain, practicing our traditional culture”
14/12/2018
From where I stand: “If women are knowledgeable and have skills, they can make the impossible possible. They can make peace.”
05/07/2022
In the words of Aileen U. Hualde
08/04/2022
Women groups relieve conflicts in fragile communities in the Philippines
END_OF_DOCUMENT_TOKEN_TO_BE_REPLACED