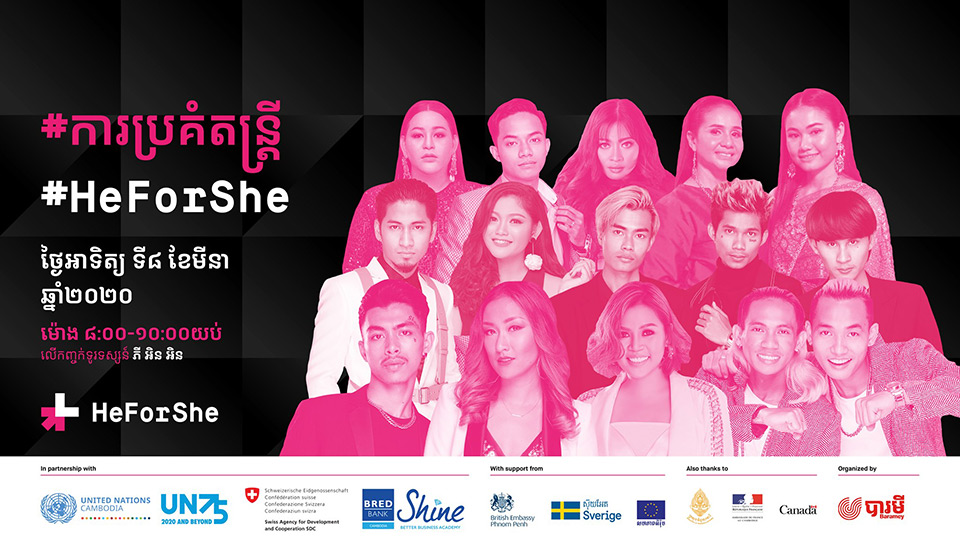 Cambodia marked International Women’s Day with a Khmer pop music concert and a digital campaign inspired by the HeForShe initiative, a global movement inviting men and people of all genders to stand in solidarity with women to create a bold, visible and united force for a world with gender equality.

Understanding that public personalities and celebrities can contribute to amplify key messages on development issues, including gender equality as an essential human right, UN Women, the United Nations in Cambodia and local company Baramey Productions, partnered with popular celebrities in the country to host a concert, promote gender equality and raise young people’s awareness.

As part of the campaign, UN Women organized a gender sensitization training for Cambodian male influencers, including singers and opinion leaders, to help them internalize issues concerning gender equality. Together, they went through a variety of important issues, including gender roles and expectations as well as women’s portrayal in the Cambodian music industry. They analyzed song lyrics and how these words can influence behavior and social norms. Finally, the conversation converged on how male singers can use their talent to positively influence the population and bring about social change.

“We have learned a lot and we see the potential for more work that we could do around engaging different voices,” said Sarah Knibbs, UN Women Representative in Cambodia, “We know that we need to engage men and boys to create a gender-equal word. Male celebrities can play an important role in channeling messages to their fans and young audiences. By inviting male influencers to become gender equality champions, we are publicly launching the HeForShe movement in Cambodia.”

The campaign, which promoted key messages on gender equality through music videos and social media content, reached 13.5 million views, including through online round table discussions. One of them, featured female influencers who discussed how men can better support women.

Music video "First Date" and other clips produced for the campaign, included targeted messages for the  youth encouraging healthy relationships and the importance of practicing gender equality.

A second roundtable, featuring Cambodian idol Socheat and other male celebrities, focused on traditional gender roles. “I can see progressive change happening from my grandmother’s generation to my mother and sister’s generation. [My sister] was educated and built her capabilities. She is confident and understands her rights. This is incredibly important,” he said.

Related News
28/04/2022
Cambodia receives funding from the Elsie Initiative Fund to identify barriers to the deployment of uniformed women to United Nations peace operations
09/12/2020
“As long as there is someone who needs my support, I will be there to provide assistance.”
21/12/2015
UN Women’s Fund for Gender Equality awards USD 1.4 million for implementation of the Sustainable Development Goals in Asia Pacific
19/12/2014
Op-ed: Economic growth and land – where are the women?
24/05/2022
Inspiring Voices from Pakistan
END_OF_DOCUMENT_TOKEN_TO_BE_REPLACED