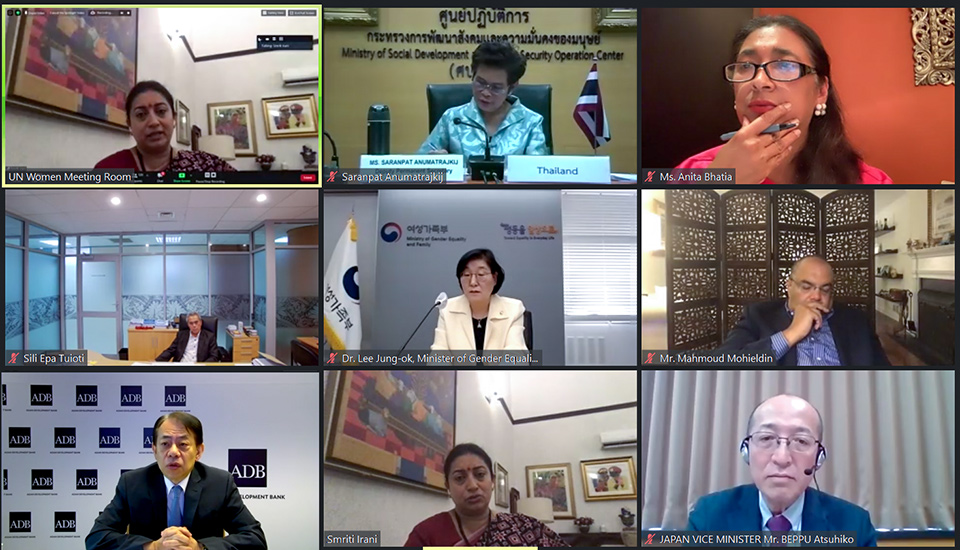 UN Women and the Asian Development Bank (ADB) have announced a new collaboration that would aim to protect women and girls in the Asia-Pacific region from the COVID-19 pandemic’s multiple negative consequences on jobs, livelihoods and well-being. The announcement took place at a virtual gathering convened today, co-organised by UN Women and the Asian Development Bank (ADB),  advocating for a gender lens in the recovery from COVID-19, with Ministers of Finance and Gender and other senior Government officials from Fiji, India, Indonesia, Philippines, Republic of Korea, and Samoa.

Experts and decision makers discussed the systemic and transformative changes needed – in economic, health and social protection systems – to ensure long-term economic recovery and resilience. ADB and UN Women identified areas for collaboration in the coming months, including strengthening data and evidence on how COVID-19 is impacting progress of the SDGs, and promoting a multipronged approach to tackling violence against women during the pandemic. Other areas where synergies could be leveraged include promoting gender-responsive budgeting as a COVID-19 response governance tool and strengthening gender-responsive procurement to support women’s businesses and jobs.

The COVID-19 outbreak has hit the Asia-Pacific region hard, particularly the most vulnerable, and is deepening pre-existing inequalities — exposing vulnerabilities in social, political and economic systems. A recent UN Women report found that women in the region, in both the formal and informal sectors, felt a much greater impact to their pocketbooks than men, with paid hours reduced, millions of job losses and reductions to income and working hours. In some countries, nearly half of women in informal sectors have lost their jobs since the outbreak — more than double the rate of men. The report showed how unpaid domestic work, which has become even more of an essential service in the context of COVID-19, remains a duty increasingly borne by women, and for more hours. The pandemic’s realities have resulted in a deepening of existing inequalities in the gender division of labour, placing a disproportionate burden on women and girls.

Participants including member states and ADB shareholders shared experiences and best practices in ensuring a gendered response to the crisis in order to build back more equal and sustainable societies and economies which could also potentially be seen as models for other countries. For instance, the ADB presented its stimulus package response, which has benefitted from a gender lens in the design of programmes.

“At least 152 countries have put in place a fiscal response to COVID-19, but very few of them are designed with a gender lens, and so are missing a vital opportunity. When gender equality is included as a key part of the recovery process, it not only builds more equal societies, it is a catalyst for economic recovery, with the potential to add $13 trillion to global GDP by 2030. I urge all governments to keep this in mind and embed a strong gender lens into all fiscal stimulus packages,” said UN Women Executive Director Phumzile Mlambo-Ngcuka.

“Stimulus packages must include social protection measures that reflect an understanding of women’s role in the care economy. Women-owned businesses are a large proportion of small and medium enterprises. These must be prioritized as well. Empowering women expands economies,” added UN Women Deputy Executive Director Anita Bhatia, at the event.

“Throughout the recovery phase, we must ensure that hard-won progress on gender equality over the past decades will not be wiped away by the impacts of the pandemic.  For this reason, we will increase our efforts to narrow gender gaps in areas such as job creation, access to financial and economic assets, food production, education, skills development, and health services,” said ADB President Masatsugu Asakawa.

Related News
18/05/2022
UN Women Asia and the Pacific visits Sri Lanka
10/05/2022
Joint Efforts on Empowering Women-led SMEs in the Context of COVID-19 Recovery
16/12/2021
UN Women cash grants help women with HIV, ethnic minority women rebuild from COVID-19 losses
03/12/2021
UN Women helps market vendors in Papua New Guinea rebound from the pandemic
13/10/2021
In the words of Merolyn Tuwasa: “People with disabilities are the most vulnerable to COVID-19, but public services are not reaching them”
END_OF_DOCUMENT_TOKEN_TO_BE_REPLACED