From Where I Stand: Begum

Begum (45) is a sex worker at Baniashanta brothel, in Dacoope, Khulna, a southern district of Bangladesh. Since Cyclone Amphan hit in May 20 amidst the COVID-19 pandemic, she has lost everything, but not hope. 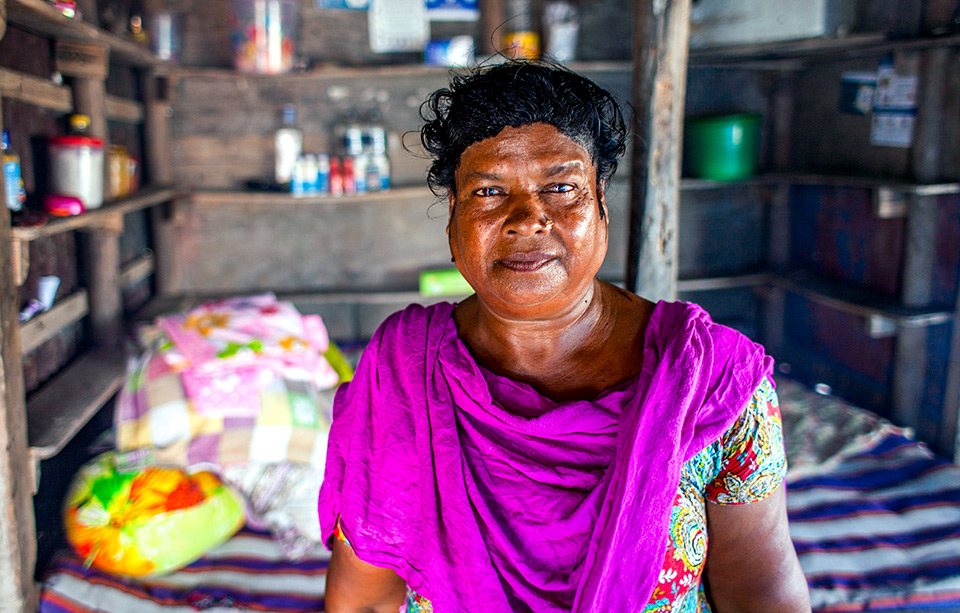 Cyclone Amphan and the pandemic have left us completely at the mercy of fate!

I was brought into this brothel by my husband when I was only 16 and I have been here for 29 years. At the age of 22, I left my husband who physically abused me and would take all my income.

I worked hard and saved up for a long time to build my house and fill it with new furniture. The COVID-19 pandemic forced me out of work and due to social distancing rules in place I had been unemployed for the past seven months.

Then Amphan hit. Members of village police requested everyone to take refuge in the nearby cyclone shelter, warning them of the upcoming cyclone. But I did not move until the last moment as I was afraid to leave my house and belongings, I built with so much hard work and love. But as the cyclone intensified, I had to take refuge at a nearby shop, and could not bring anything with me. My house and shop were destroyed and Amphan left me homeless. With no food in sight, workers like me were at the mercy of a few people offering relief. Eventually I found a small room to live in, but my income did not return, causing my debts to rise, especially for rent and groceries.

But I haven’t given up. I dream to set up a small restaurant within the brothel one day, as I am aging now, I may not have the regular income from being just a sex worker. I also have a younger brother, and I look after him and his family.

I received cash support from UN Women as did other women and girls in the village who were hardest hit by Cyclone Amphan. I bought household essentials and kitchen utensils with it. I want to build back what I had. The flood has made me homeless and devastated but has not broken my spirit. I am taking baby-steps, but I will need more support to fix my small tea stall and house. But I will not give up my dream to be self-employed and empowered again.

(*) Cash support provided to victims of Cyclone Amphan was part of a project implemented by UN Women with financial support from the Government of Japan.

Begum (45) is a sex worker at Baniashanta brothel, in Dacoope, Khulna, a southern district of Bangladesh. She has been living in this brothel for the last 29 years and used to run a small tea stall adjacent to her house, as a side business, before cyclone Amphan hit during the COVID pandemic. She was given immediate cash support after she lost everything to the cyclone under the programme, supported by the Government of Japan. Her story relates to Sustainable Development Goal (SDG) 10, which aims to promote reduced inequalities, and SDG 5 on gender equality and women’s empowerment,