In the words of Habiba Sarabi: “Our vision is of an Afghanistan where every woman can live in peace and recognize her rights” 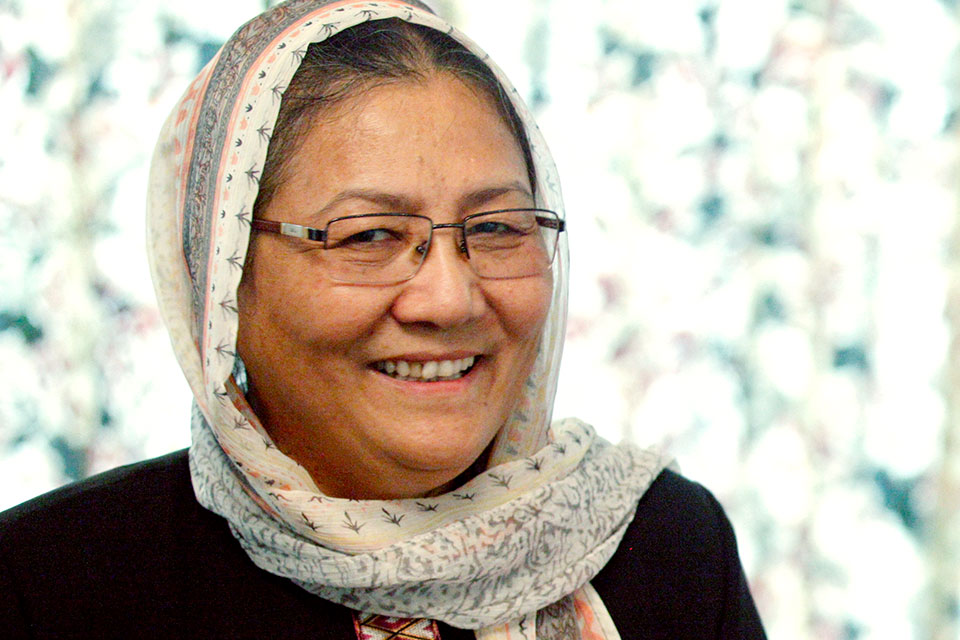 Dr. Habiba Sarabi, a trailblazing leader in Afghanistan, is one of only four women negotiating peace with the Taliban as part of the ongoing intra-Afghan talks. Trained as a hematologist, she became a peace activist, politician and reformer in the reconstruction of Afghanistan. She has served as Minister of Women’s Affairs and in 2005 became the first Afghan woman to serve as a governor. She continues to be instrumental in promoting women’s rights and peacebuilding at a crucial turning point for her nation.UN Women spoke with Dr. Sarabi on the occasion of the 20th anniversary of UN Security Council resolution 1325, which continues to shape the agenda for women, peace and security, to include women and gender analysis in all aspects of conflict prevention, peace and reconstruction. Critical to the agenda, are women peace leaders gaining and exercising decision-making power.

When I was a girl, growing up in Afghanistan in the 1960s, all I wanted to do was go to school. It was hard because my father had no interest in my education. But I was born stubborn and determined. I walked myself to school and endured the taunts of the boys.

I was a young woman, married with two children and working in healthcare in Kabul, when the Taliban occupied Afghanistan in 1996. My city became a violent and dangerous place. The Taliban shut women inside their houses and stopped us from working. When they closed the schools, I took my children and fled to Pakistan while my husband stayed behind.

It was a terrible time for my family. My children were very young, but I didn’t feel like I could stand by while my sisters in Afghanistan were suffering. I started returning to Kabul in secrecy, trekking across the mountains and crossing the border in a burqa so I could help set up an underground network of schools for girls. When I was back in Pakistan, I worked for civil society organizations in refugee camps and spoke out about the situation for women back home.

After the fall of the Taliban in 2001, I immediately returned to Afghanistan to help with the reconstruction. I was first appointed Minister of Women’s Affairs by the Afghan Interim Administration under Hamid Karzai. Then, in 2005, I was made Governor of Bamyan Province, becoming the first woman to serve as governor anywhere in Afghanistan.

It was a landmark moment for women in the country. Many people had never seen a woman in any position of authority before. Once, I remember being at an event and speaking with a group of women in an anteroom. At some point, the chief of police arrived and the women were astounded to see this important man taking his orders from me. I learned the power of being a role model and showing women that change is possible.

The situation facing Afghan women today is not the same as it was a few decades ago. We are more mobilized. Social media has helped us raise our voices. Now many women participate in public life and hold public office.

Yet, we are facing a crucial moment in our fight, both for women’s rights and a lasting peace.

I am currently participating in the peace talks between the Afghan Government and the Taliban to try and ensure that women are at the centre of the ongoing negotiations. Without women’s participation in this process, there will be no lasting and sustainable peace.

At the same time, we are seeing an upswing of violence against women in Afghanistan by those who understand that by attacking women you can also attack and undermine the peace process itself. Sexual assaults and murders are rising and women’s freedom of speech and expression in rural areas is being silenced.

So much is at stake. We must not falter in our determination to keep going until we realize our vision of an Afghanistan where every woman can live in peace and recognize her rights.”

Related News
22/09/2022
women and peace plan in the Philippines’ Bangsamoro region
05/12/2022
ASEAN RPA WPS launch
25/07/2022
Take Five: “It is our responsibility as the generation for future, as the generation for today, to hold people in power accountable.”
27/04/2022
In the words of Sittie Janine M. Gamao: “To overcome my own fears, I think of myself not as babae lang (just a woman) or bata pa (too young) but as a peace officer doing her work.”
23/03/2022
UN Women supporting female former combatants in the Philippines as agents of peace
END_OF_DOCUMENT_TOKEN_TO_BE_REPLACED