Entrepreneurs, activists and actors join in for Malaysia launch of a campaign for women’s empowerment in the workplace

The virtual launch session on 14 January was co-hosted by LeadWomen Sdn Bhd, based in Malaysia, and the EU-funded WeEmpowerAsia programme of UN Women, who announced their partnership over the WEPs campaign since September 2020.

A highlight was an immersive experience on unconscious bias in the workplace, featuring actors holding a simulated business meeting. The audience of mostly business leaders were invited to raise a red flag at any signs of unconscious gender bias, and to make suggestions to change the direction of conversation and help produce fair and inclusive decisions. The exercise demonstrated the need to turn unconscious bias to conscious awareness to stop making gender-exclusive decisions.

WeEmpowerAsia’s Regional Programme Manager Katja Freiwald said the WEPs were an essential tool for the private sector “to drive gender equality, inclusivity, and diversity." She also introduced and congratulated the first Asia-Pacific WEPs Awards winners and first runners-up from Malaysia, including Emiliawati Binti Zainol of Q3 Management Solutions, Vinda Group Southeast Asia, Swinburne University of Technology Sarawak, Deloitte Malaysia, BC Capital Holdings, and HSBC Malaysia Electronic Data Processing. Their remarkable achievements showcase the best practices of implementing the WEPs in business, ranging from capacity-building programmes for women employees and awareness-raising initiatives on harassment and gender-based violence, to the promotion of male engagement in tackling gender bias across the supply chain.

“The clock is ticking” on gender-related and other Sustainable Development Goals (SDGs), said UN Resident Coordinator Stefan Priesner. “We are behind on many and all of the targets and the SDGs will not be achieved if 50% of our population are still left behind.” For recovery from the COVID-19 crisis, he says that “full and equal participation of women is the only way to ensure that we have the best solutions and that no one is felt behind.” 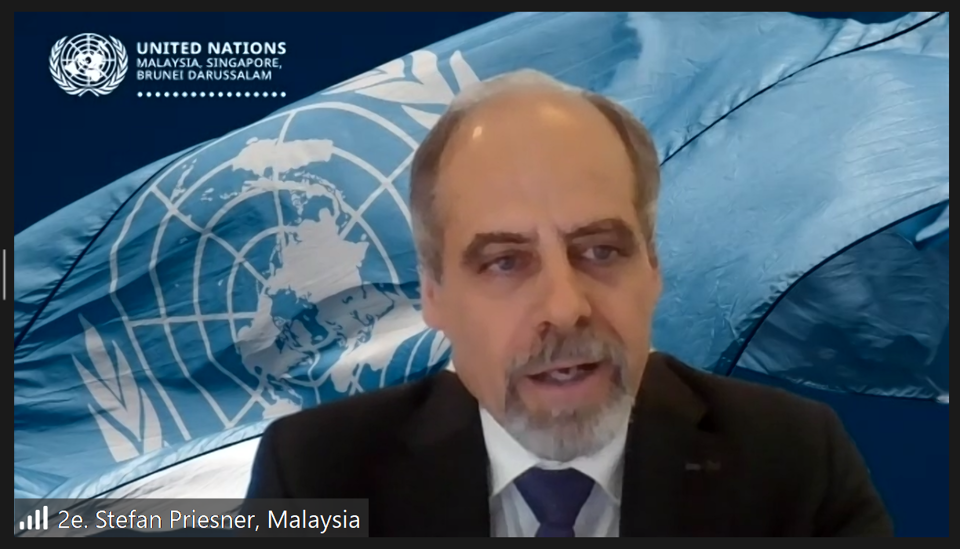 EU Ambassador to Malaysia Michalis Rokas introduced the Gender Action Plan put together by the EU last November “to push forward the progress on gender equality.” He emphasized that “the women rights and gender equality are the fundamental human rights, and also empowering women makes sense economically and socially.” For the Asia and the Pacific region, he says that “it is estimated that advancing women’s equality could increase collective GDP by 20% by 2025.” 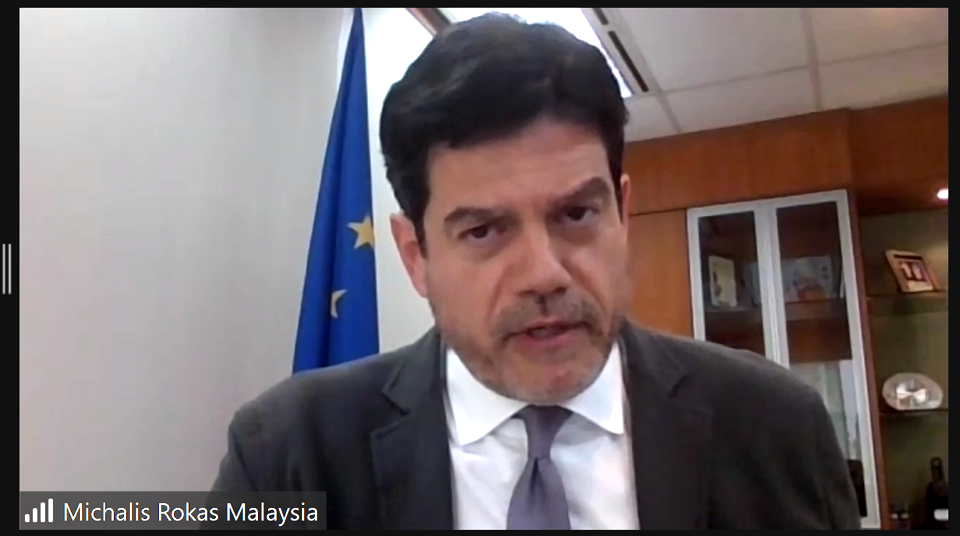 LeadWomen CEO Dr. Marcella Lucas shared the increased women representation on the boards of the publicly listed companies in Malaysia, which LeadWomen has pushed for. According to her, the representation rate of women in the business boardrooms of Malaysia’s top 100 publicly-listed companies rose to 26.2% in 2019, an 18.5% increase from 7.7% in 2011. She also underscored efforts to empower women to unlock the unmet business potential through advocacy, training and development, as well as recruitment of board-ready women and creation of a “women leadership pipeline” with the support of the Securities Commission Malaysia, Bursa Malaysia and business chambers.

Any company in Malaysia, from micro through medium-sized and up to major corporations, that is committed to promoting gender equality is cordially invited to join the WEPs Activator Malaysia campaign. As the first step, those interested are asked to participate in a WEPs Awareness Training provided by LeadWomen and WeEmpowerAsia. Upcoming sessions are scheduled for 26 January and 25 February 2021. Those who have successfully taken the awareness training will then be invited to sign up to the WEPs and proceed to the next phase of the programme, taking the WEPs Implementation Training sessions from March to June 2021. For more information and to apply, click the below registration links. 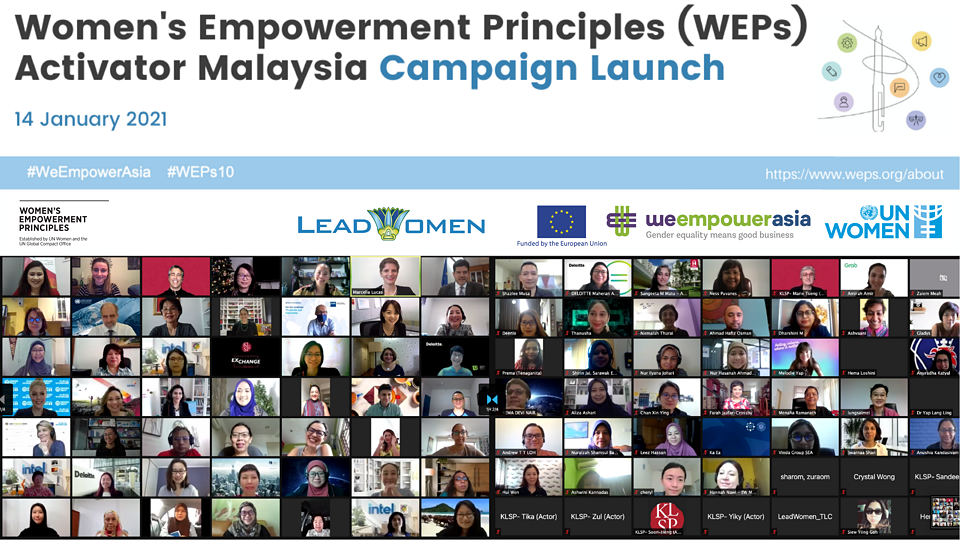 Entrepreneurs and leaders from various sectors in Malaysia gather to discuss challenges and opportunities in promoting gender inclusivity and diversity at the virtual launch of the WEPs Activator Malaysia campaign held on January 14th, 2021. Screenshot: LeadWomen Sdn Bhd

About WeEmpowerAsia
WeEmpowerAsia is a UN Women programme funded by and in partnership with the European Union that seeks to increase the number of women who lead and participate in business in China, India, Indonesia, Malaysia, the Philippines, Thailand and Viet Nam. For more information, visit http://weempowerasia.org.