Building back better from COVID-19 needs investment in feminist, grass-roots leadership. Yet, direct funding to women’s organizations accounts for less than one per cent of the global official development assistance provided for gender equality. In six stories, learn about the critical support that grass-roots women leaders and their organizations bring to their communities. 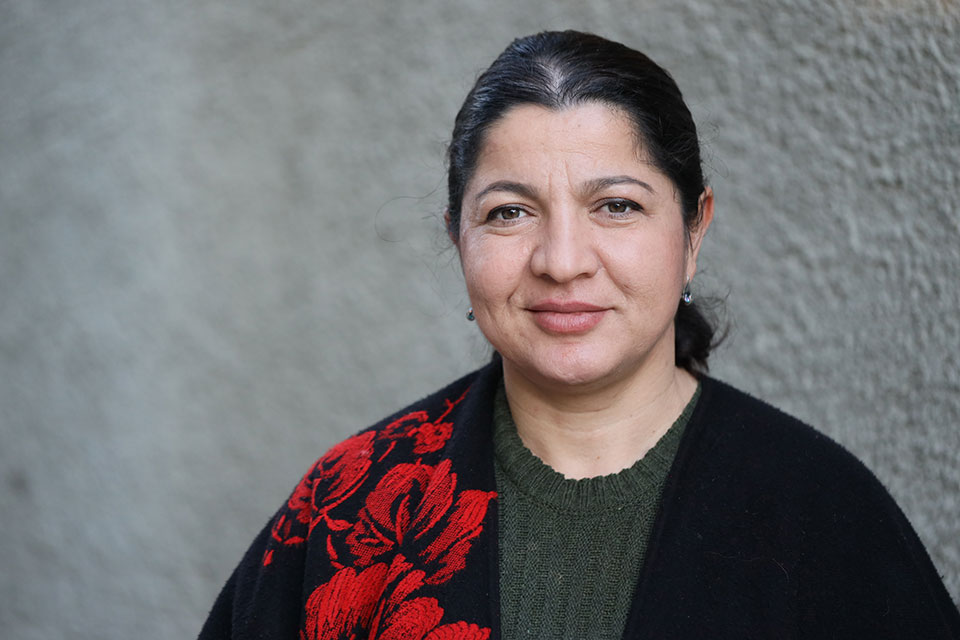 As the first cases of COVID-19 were reported in March 2020 in Albania, Manjola Veizi raised her voice for the Roma, one of the most marginalized communities in the country.

“The pandemic impacted the Roma community heavily,” says the 43-year-old Executive Director of the National Network of Roma and Egyptian Women. “The poorest ones who had informal incomes or collected scrap metal, were the worst-hit. Their survival was at risk.”

UN Women is working to provide support to all women on the front lines of the fight against this pandemic; promoting flexible working arrangements; and prioritizing services to prevent gender-based domestic violence. Now you, too, can help them. Donate now.

Veizi rallied the government, as well as national and international organizations, to divert and allocate funds to support her community.

“We delivered food packages and protective equipment to about 500 families in five municipalities,” she says. “If we had not intervened, I don’t know what would have happened to them.”

To date, over 116 million people have been infected with COVID-19 around the world, with fatalities exceeding 2.5 million. While everyone is facing unprecedented challenges, women and girls have been disproportionally affected. Across the globe, women earn less, save less, hold less secure jobs, are more likely to be employed in the informal sector. They have less access to social protection and are the majority of single-parent households. Consequentially, they have less capacity to absorb economic shocks, such as the one brought on by the COVID-19 pandemic.

As the pandemic raged on, around the world, there was also a marked upsurge in violence against women. Calls to helpline increased up to five-fold in some countries; in others, women’s access to help was compromised during lockdowns.

“The prevalence of violence increased because women where stuck at home with their abusers, and they did not know that support services were still open,” says Veizi. “UN Women supported us in raising awareness in the communities.”

In Albania, UN Women has been providing financial support to a consortium of organizations, including Albanian Disability Rights Foundation, Roma Women’s Rights Centre and Aleanca LGBT, to ensure that women from marginalized communities have quality access to services and information to report and recover from violence.

Building back better from COVID-19 requires investment in women’s leadership at all levels, everywhere. Here are five other examples of grass-roots initiatives supported by UN Women that have had tremendous impact during the pandemic.

Training women in gender-responsive and inclusive governance in Nepal 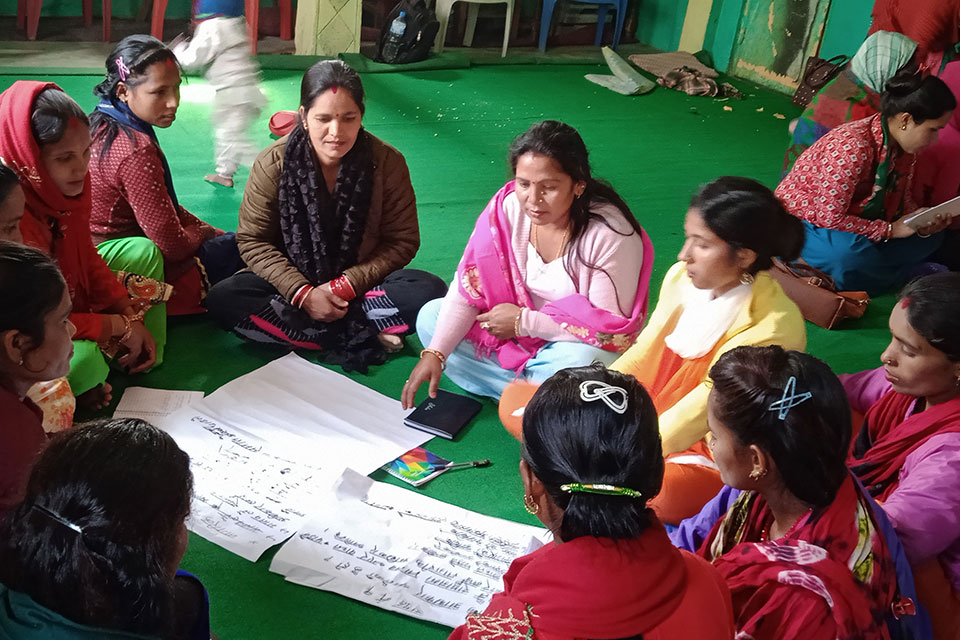 In South Asia, persons from Dalit community are at the bottom of the archaic “caste system” – a social stratification, whereby individuals face multiple generations of discrimination and segregation based on their descent. Laxmi Badi, a Dalit woman leader from Nepal is steadfast in demanding equal rights, even amidst the COVID-19 pandemic.

Years ago, Badi joined the Feminist Dalit Organization and supported Dalit women to raise cattle and become economically independent. As the next step in her career, in 2017, she won the local election as a ward member of her municipality. In 2020, Badi became part of a UN Women programme funded by the Government of Finland, which provided leadership and governance training to local women leaders.

During the COVID-19 lockdown last year, Badi's municipality saw an influx of Nepali migrant workers returning from India. The people from 'upper castes' in the quarantine centre refused to let Dalit returnee migrant workers enter the premises and locked the gates saying they might spread COVID-19.

When Badi found out, she went to the centre and explained to everyone that any one of them, including people from 'upper castes', could test positive for COVID-19. She advised all to maintain physical distance and warned if anyone discriminated against the Dalits, she would report them to the police. She also provided support to the survivors of gender-based violence in the quarantine centre and made sure that those in need received relief packages with food and sanitation products.

"Without the quota system, I would not be where I am today," shares Badi. She believes that mandated gender quotas for elected positions, together with supportive training, has maximized her impact in public life.

Advocating for the rights of migrant domestic workers in Lebanon 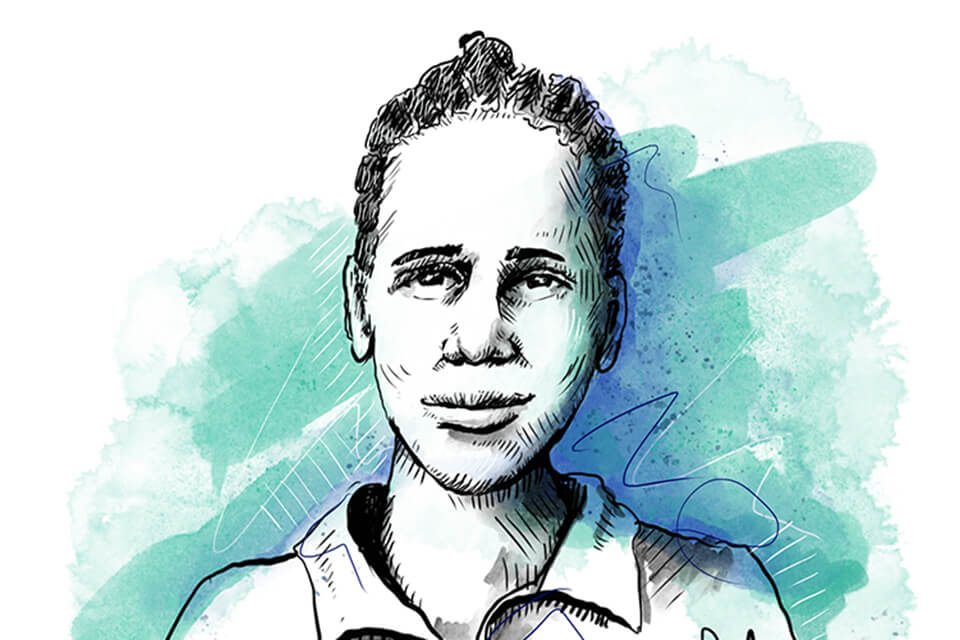 Meserat Hailu, former migrant worker in Lebanon and plaintiff in a ground-breaking case that may set precedence for migrant workers to seek legal redress against abuse. Credit: UN Women/Brady Black

“I used to work without a salary. When I asked for my salary, madame either said no, or she hit me. She used to hit me a lot,” says Meserat Hailu. “It was a nightmare.”

Hailu was 29 years old when she travelled to Beirut, Lebanon, as an Ethiopian migrant domestic worker. For more than eight years, she suffered abuse by her employer. “I worked 15-hour days, every day, with no holiday or weekend. I was not allowed to see anyone. I wanted to leave, but I couldn’t,” she says.

Like other organisations, Legal Action Worldwide received word of her situation, took up her case and  with others demanded her release. After Hailu returned to her village, close to Addis Ababa, the lawyers supported her in initiating legal proceedings against her kafeel (sponsor).

Unfolding in the backdrop of unprecedented challenges posed by the successive economic crises, the COVID-19 pandemic, and the recent explosions in Beirut, Maserat Hailu’s case has the potential to set ground-breaking precedence for legal redress for thousands of migrant domestic workers in Lebanon. UN Women’s work with migrant workers in Lebanon is supported by the Government of Netherlands.

Amplifying the voices and participation of children with disabilities in Paraguay 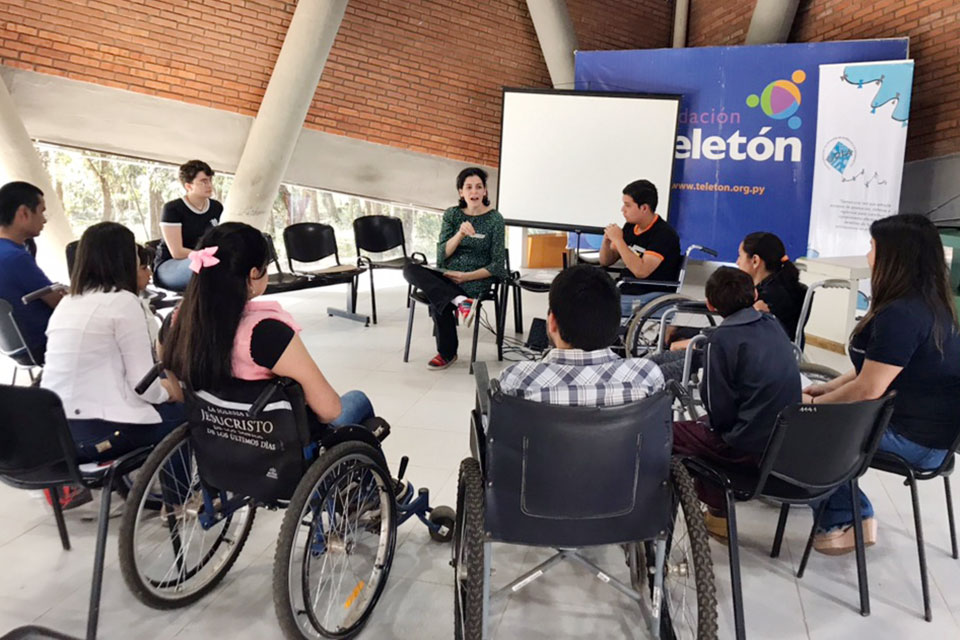 Young people with disabilities participate in a CDIA training on the topics of violence, inclusion, rights and protection systems held in August 2019 in Coronel Oviedo, Paraguay.Photo: CDIA/Alana Cano

“I want to live in a world with social justice and peace, with equal opportunities and rights,” says Alana Cano Cameroni, 35, explaining why she works at the Coordinator for the Rights of Children and Adolescents (CDIA) in Paraguay. CDIA promotes the rights of children and adolescents, raises awareness about social protection gaps, improves access and quality of services, and informs public policy.

As the COVID-19 crisis deepened existing inequalities in Paraguay, CDIA stepped in to make sure that the leadership and needs of girls and adolescents living with disabilities was not side-lined. “Girls, boys and adolescents must be placed at the centre of our collective action, making decisions and taking action in everything that affects them,” says Cameroni.

The organization arranged the exchange of experiences, learning and strategies to face COVID-19, which resulted in a series of online workshops on the rights of children. Some 17 regional departments from 83 localities within the capital, Asunción, participated in the workshops. CDIA also set up a digital portal and ran a social media campaign to raise visibility of pertinent issues from the perspective of girls and adolescents living with disabilities.

The UN Trust Fund, administered by UN Women on behalf of the UN system, supports CDIA with multi-year funding, training and advocacy. 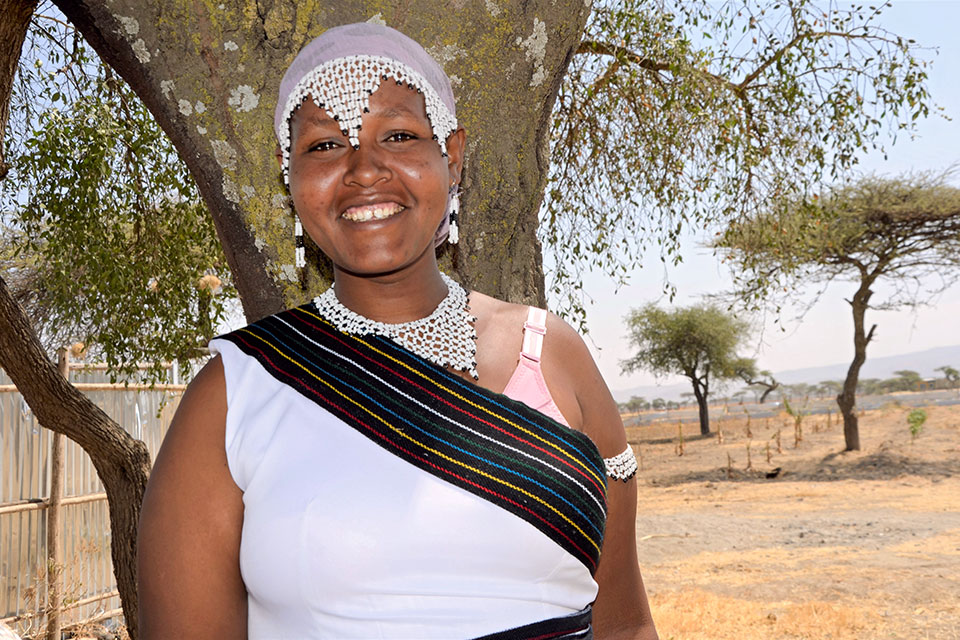 Kebele Burie, 35, leads the local a women-owned livestock compound, serves as secretary at the local savings and credit cooperative, and is appointed by her community to the role of haadha siinqee.- peace builder and advocate for women’s rights. Photo: UN Women/Fikerte Abebe

For Kebele Burie, a 35-year-old mother of five from Adamitulu district in Ethiopia’s Oromia region, the fight for economic empowerment and women’s rights began in her teens. She had to drop out of school in the eighth grade to work and support her mother and younger siblings after her father abandoned them.

Today, Burie and her community are benefitting from what she says is, “the unleashing of my leadership potential” through the joint UN programme, ‘Accelerating Progress towards the Economic Empowerment of Rural Women’.

The programme increases the productive potential of women smallholder farmers, helps women expand income opportunities by tapping into high-value markets, and enhances women’s leadership and participation in rural institutions and in shaping laws.

“As a result of the capacity building training and my success in farming and managing the cooperative, my community appointed me as the haadha siinqee”, says Burie, meaning she is now part of the indigenous conflict resolution institution. Since she took on the role two years back, reports of domestic violence have declined, she says, because the husbands are more aware of women’s rights.

During the COVID-19 pandemic, in-person meetings have been limited and Burie’s cooperative pivoted from livestock farming and trading to the provision of small loans to support individual income generation activities.

Launched in Oromia and Afar regions in 2014, the economic empowerment programme is supported by the Government of Ethiopia, the International Fund for Agricultural Development, the UN World Food Programme, the UN Food and Agriculture Organization, and the Governments of Spain, Sweden and Norway. It works with over 10 business cooperatives and 15 saving and credit cooperatives. More than 3,000 people have directly benefitted from the programme.

Connecting indigenous women and defending their rights in Brazil 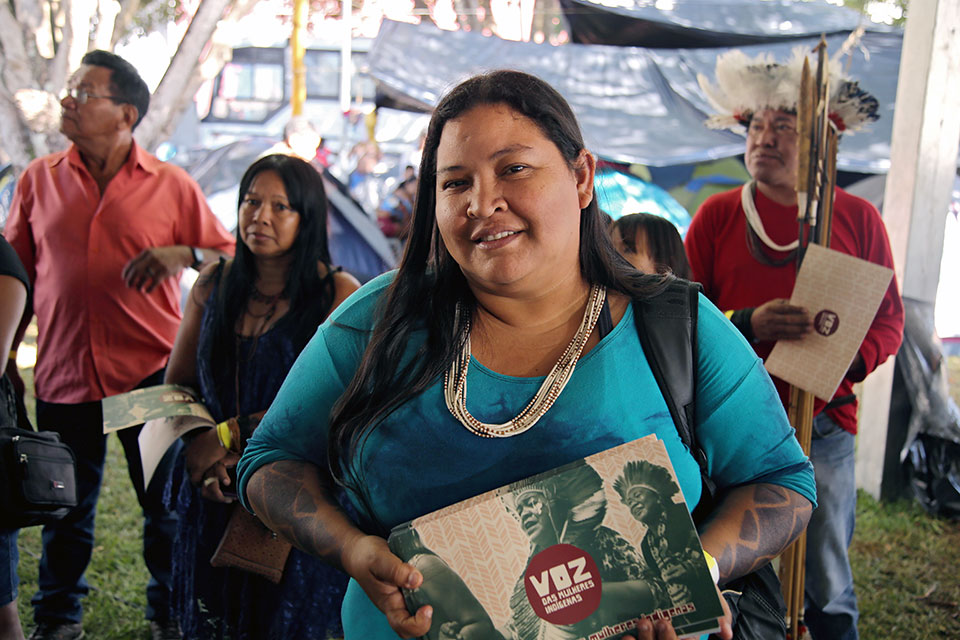 One of the greatest impacts of the COVID-19 pandemic on indigenous communities in Brazil is on their culture, says Maria Leonice Tupari, 45, Coordinator of the Association of Indigenous Warriors of Rondônia (AGIR) NGO in Cacoal city, Brazil. Founded in 2015, AGIR represents the rights of 56 indigenous peoples in Rondônia state, promotes women’s empowerment, and calls out human rights violations.

“We have the habit of visiting each other, so we had to learn how to live in a different way,” says Tupari. “Many people didn’t understand what the coronavirus was at first, or why they needed to change community relations, and couldn’t have traditional celebrations or funerals.” Tupari has been working in the NGO sector since 2000 and has seen a steady rise of violence against indigenous women in the territories.

Through the European Union-funded project, ‘Connecting Women, Defending Rights’, UN Women held a series of consultations with partners and women human rights defenders between March and April 2020. The consultations paved the way for awarding small grants to strengthen the institutional capacities of women human rights defenders in advocating for rights and preventing violence against women during the COVID-19 pandemic. AGIR was among the seven organizations that received the grant; the call for applications for funding received 629 proposals.

Tupari says the project has helped strengthen the communication capacity of indigenous women leaders across the state, their use of digital communication tools, and their understanding of the pandemic’s impact to enable them better adapt and counter misinformation about the virus and vaccine.