I am Generation Equality: Lauralyn, Filipino advocate for preventing violence against women and girls 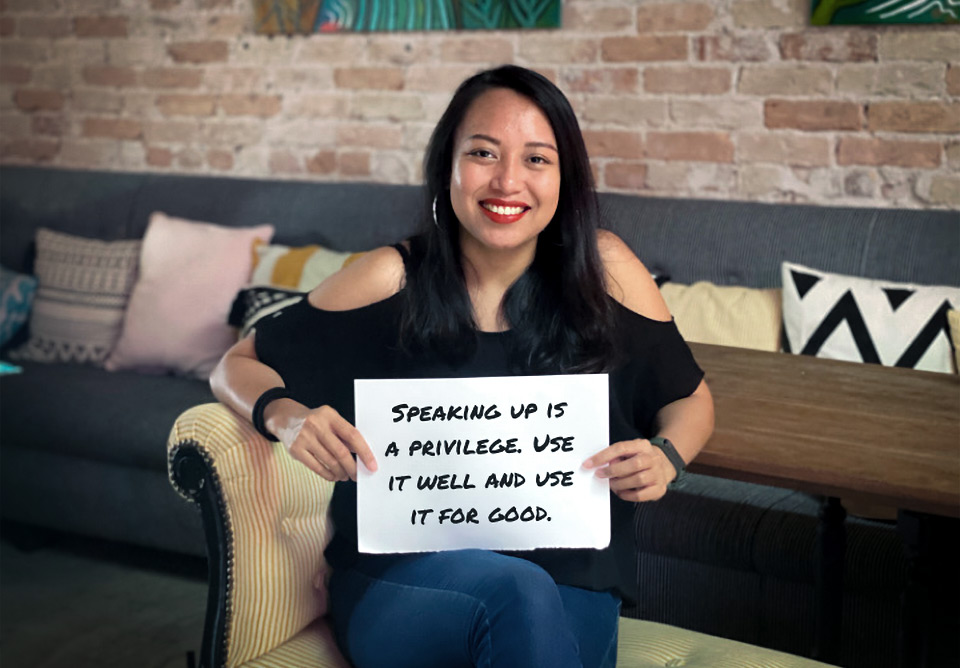 Lauralyn has a message for all. This photo was taken at a restaurant in Kuala Lumpur, Malaysia on 16 March 2021. Photo: Makissa Smeeton

Three actions you can take to help prevent violence against women and girls:

What led me to become an advocate was a string of workplace and sexual harassment experiences that ended up with me making a police report. The last experience left me feeling broken, traumatized, institutionally betrayed, and eventually, angry.

At that time, I was fortunate enough to have a friend who was a part of the Joint Action Group for Gender Equality. She made sure I had the right resources to start my recovery. The knowledge she shared with me made me realize that there was not enough awareness and education for such a widespread problem.

As someone who is active on social media and has helped businesses with their marketing communications, I felt a strong need to use my skills more meaningfully. I started looking for causes that needed to communicate their messages more effectively, which led me to volunteer my time at UNHCR (United Nations Refugee Agency) Malaysia.

“..speak up, take a stand, mobilize, and take big and small actions to advance women’s rights”

Social media became a medium for me to reach as many people as possible to prevent someone from going through what I did or worse. I also use it to let survivors know that they are not alone -- either by sharing my stories or stories of others.

The Internet has given us access to lots of information and also lots of misinformation. Many people are not aware of their influence when they share content online.

Be wary of the content you consume online. Find reputable sources, and don't just rely on one source of information like social media or movies, especially when they romanticize sexual violence.

Stop reinforcing patriarchal thinking -- this goes for both men, boys, women, and girls.

Men must unlearn, step up

Men need to learn how patriarchal thinking causes violence against women and girls.

They can unlearn toxic beliefs and behaviours and normalize sharing emotions other than aggression and violence. They can be an ally for women. Confront other men when they make sexist or misogynistic remarks, sexually harass someone, “mansplain”, and engage in other inappropriate behaviour.

Lauralyn, 33, lives in Kuala Lumpur, Malaysia. She advocates for social causes when she is not selling event and digital marketing solutions to academic institutions and event organizers worldwide. Lauralyn is a participant in the Generation Equality Design Challenge organized by UN Women Regional Office for Asia and the Pacific and World Design Organization. Lauralyn prefers to be addressed without a paternal surname as she does not want her identity to be associated with patriarchal traditions.

Related News
22/12/2021
In the words of Police Lieutenant Colonel Melbeth Mondaya: “Protection and education for girls is especially important because they are the key to women’s empowerment.”
13/07/2021
I am Generation Equality: Louise Mabulo, Philippine chef, farmer and activist
05/07/2022
In the words of Aileen U. Hualde
09/06/2022
UN Women Pakistan and Nishat Mills Limited join forces to promote gender equality and safer workplaces
01/06/2022
One Step at a Time
END_OF_DOCUMENT_TOKEN_TO_BE_REPLACED