Bodily autonomy, a fundamental right, remains elusive for millions of women and girls in Asia-Pacific and globally

Landmark UN report is a rallying cry for countries and societies to strive harder to strengthen rights and choices for all in achieving Generation Equality – including significant and holistic legislation and measures to address the issue of teen pregnancy in Thailand. 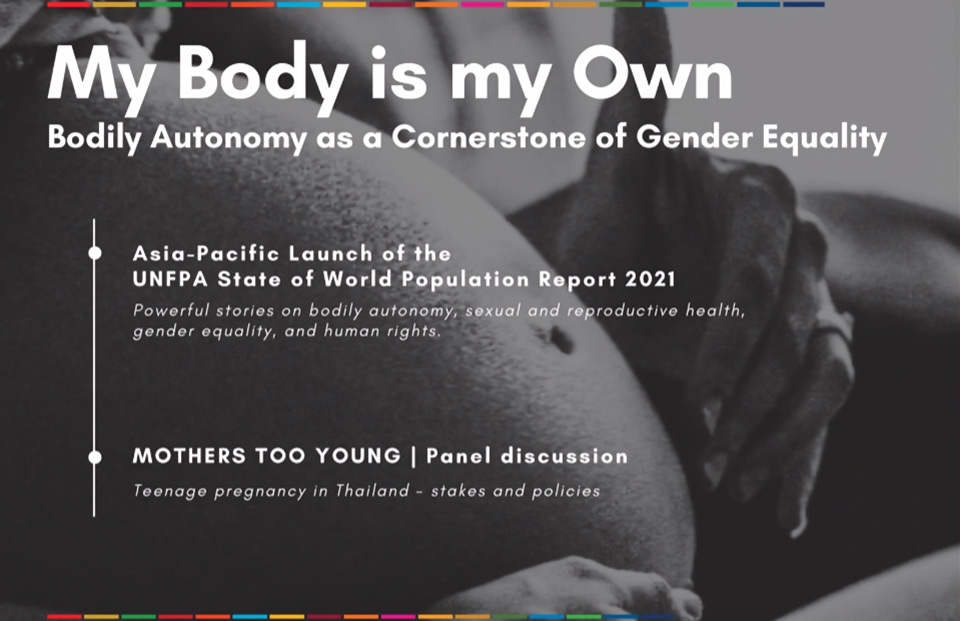 Bangkok, Thailand — Nearly half of women in 57 countries, including several in the Asia-Pacific region, are denied the right to decide whether or not to have sex with their partners, use contraception or seek health care – egregious violations of bodily autonomy, which should be a fundamental right for all. These are among the key findings contained within My Body is My Own: Claiming the right to autonomy and self-determination, the 2021 State of World Population flagship report from UNFPA, the United Nations sexual and reproductive health agency, and the first-ever UN report focusing on bodily autonomy.

The report’s Asia-Pacific launch was marked via an online event in Bangkok today, with the participation of noted advocates and activists from across Asia-Pacific including Thailand, through the auspices of the Embassy of France in Thailand, the Embassy of Mexico in Thailand and the UN Women Regional Office for Asia and the Pacific, key partners heading the Generation Equality Forum (GEF). The Forum, a civil society centred global gathering for gender equality, is convened by UN Women and co-hosted by the governments of France and Mexico. From the GEF held in Mexico City last March, six thematic Action Coalitions launched their blueprints with gender equality commitments for 2021-2026. UNFPA co-leads and France is part of the GEF Action Coalition on Bodily Autonomy.

“Bodily autonomy and integrity - the power to make our own choices about our own bodies - are grounded in gender equality and human rights, and are necessary for women’s empowerment and to achieve the Sustainable Development Goals,” noted Bjorn Andersson, UNFPA Asia-Pacific Regional Director. “Denying millions of people, including women and girls, their empowerment, compromises not only individual health and wellbeing but hinders the development of entire societies and countries.”

“We will continue to advocate strongly on these issues by deploying a rights-based approach because this topic is not just about health”, French Ambassador to Thailand H.E. Thierry Mathou highlighted. “There can be no equality between individuals without the right to bodily autonomy and self-determination, and in this regard I would like to commend the valuable report of UNFPA in promoting understanding and progress on these rights.”

Eugenia Lopez Uribe, Latin America & Caribbean CSO representative at the GEF, shared some recommendations that came out of the GEF in Mexico City: “We need to acknowledge that reproductive justice and comprehensive, freely accessible sexual health care remains an unfulfilled priority globally. The States need to fund and design universal health care systems that work for all girls, adolescents and young people, by providing free and subsidised care, removing legislation and policies that require third-parties’ consent, eliminating stigma and discrimination based on their age, and respecting the autonomy of young people.”Through its groundbreaking report, UNFPA is measuring both women’s power to make their own decisions about their bodies and the extent to which laws in countries support or interfere with a woman’s right to make these decisions.

In the eight Asia-Pacific countries where data are available, only 59.2 per cent of women are fully empowered to make choices over health care, contraception and the ability to say yes or no to sex.Real solutions to ensuring bodily autonomy, as the State of World Population report finds, must take into account the needs and experiences of those affected, as, for example, Thailand has done in addressing the long-running challenge of adolescent pregnancy, enacting significant legislation with the participation of young persons themselves.

“Because bodily autonomy and integrity influence so many aspects of health as well a decent, dignified life, progress in realizing them will lead not just to achieving sexual and reproductive health and the Sustainable Development Goal on gender equality, but many of the other Goals as well,” said Mohammad Naciri, UN Women Asia-Pacific Regional Director. “This includes SDGs related to promoting health, reducing inequalities and ending poverty. All of these are interlinked, a key message conveyed through the Generation Equality platform in this, the Decade of Action toward achieving the 2030 Agenda and its vision of leaving no one behind.”

* The online Asia-Pacific launch of the UNFPA 2021 State of World Population Report, followed by a UN Women-moderated discussion on addressing adolescent pregnancy in Thailand with multiple stakeholders including UNFPA and UNICEF, can be accessed at: YouTube.com/UNFPAAsia and Facebook.com/UNWomenAsia

For queries and/or to arrange media interviews:

The Generation Equality Forum opened in Mexico City last March, and will culminate in Paris from 30 June to 2 July. Register here to gain access to the GEF's digital platform, to attend nearly 90 events featuring 500 panelists and interact with tens of thousands of participants from around the world.

In the 57 countries studied for the State of World Population Report:

Related News
31/01/2014
Message of Phumzile Mlambo-Ngcuka, Executive Director of UN Women, for International Day of Zero Tolerance for Female Genital Mutilation
01/02/2022
In the words of Tarikul Islam
20/12/2021
Joint Statement: UNHCR and UN Women join efforts to protect and uphold the rights of women and girls in Afghanistan
03/12/2021
UN Women helps market vendors in Papua New Guinea rebound from the pandemic
24/11/2021
Take five: “The justice system must be responsive to persons with disabilities.”
END_OF_DOCUMENT_TOKEN_TO_BE_REPLACED