Take Five: “The role of women in building international peace is increasing, but needs more of us to step up” 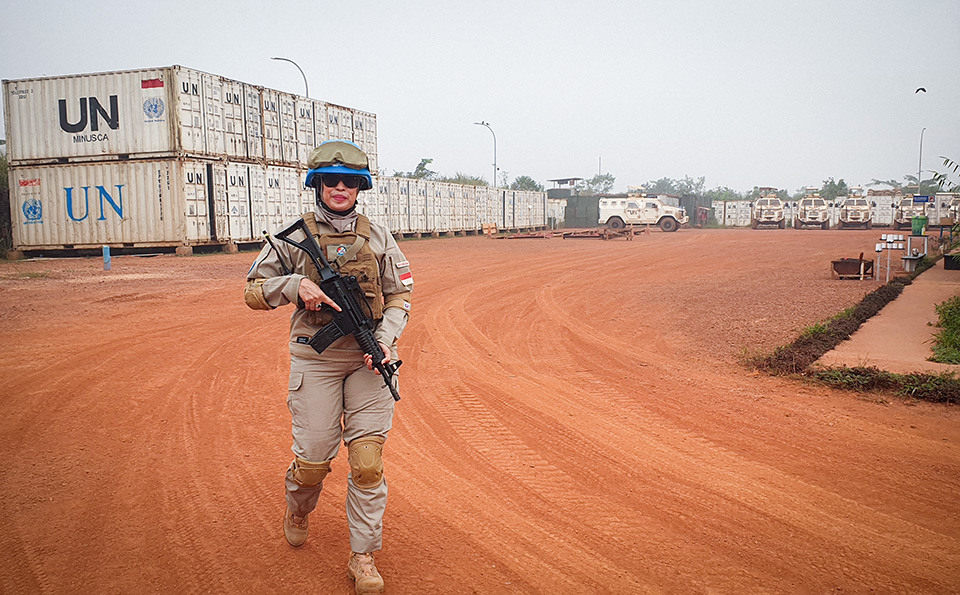 Inayatun Nurhasanah (Ina) started her one-year deployment at the United Nations Multidimensional Integrated Stabilization Mission in the Central African Republic (MINUSCA) in September 2020. Before joining the UN peacekeeping mission, she was the Head of the Women and Children Protection Unit at Pontianak Police Office. After serving 23 years as a national police officer in her hometown of Pontianak in West Kalimantan, Indonesia, Ina is now the focal point of sexual abuse and exploitation as well as administration officer at the Formed Police Unit Indonesian contingent at MINUSCA.

How did you prepare to become a UN peacekeeper in the Central African Republic?

In 2019, I was selected for the deployment to the Central African Republic after a competitive selection process consisting of several tests on computer skills, English, shooting, physical strength, driving, field competency, and psychology. Before the deployment, we went through a seven-month intensive pre-deployment training, including not only French language and administration [the focus area of my duty at MINUSCA], but also tactical and physical training on close combat and shooting.

How are you and other women peacekeepers from Indonesia contributing to maintaining peace and security?

Apart from performing daily duties including conducting daily patrols, providing operational support, and protecting civilians under MUNISCA’s mandate, I am also the focal point of sexual exploitation and abuse (SEA) in my contingent. Together with the liaison officer, we deliver training to ensure that all personnel understands the reporting mechanism as well as the consequences of breaching the UN standards of conduct on SEA.

In my contingent, 16 out of 140 personnel are women peacekeepers from different regional police units in Indonesia. I feel proud to serve under the UN flag with more than 150 Indonesian women. Following the role model of the first Indonesian woman peacekeeper Lt. Colonel Pengasihan Gaut, together we are contributing to international peace and security.

Are there any specific challenges faced by women peacekeepers?

Women tend to feel small about themselves, but we are just as capable of performing duties and maintaining peace as men. At my unit, policewomen and policemen carry out the same range of activities and duties. We as women must draw from inner strengths to help us overcome any hinderance to achieve our goals and reach our full potential.

Getting permission and support from our families is another challenge. I first learned about the deployment call for Indonesian policewomen to join the Formed Police Unit with UN peacekeeping mission in 2013, but I did not apply. My daughter was too young at that time, and it would be impossible for me to stay so far from my family for one year. She turned 18 in 2019 and I applied for the deployment with solid support from my family to become a UN peacekeeper.

As a woman peacekeeper, what is the potential role that you can play in sustaining peace in local communities?

Women can play a vital role in peacekeeping missions, especially in communicating and building trust with local communities. In conflict-affected areas, women and children suffer first and most from any violence. Women peacekeepers can support vulnerable groups better since we are perceived to be more approachable and understand better their feelings, needs, and wants. To handle cases where survivors have been through traumatic experiences, nothing is more important than creating trust and a safe and comfortable environment for them to open up.

The theme of this year’s International Day of UN Peacekeepers is “The road to a lasting peace: Leveraging the power of youth for peace and security”. Do you have any advice for women peacekeepers of the next generation?

Before deployment, you need to get both physically and mentally prepared. Serving in a country thousands of miles away from Indonesia is rewarding but challenging at the same time – there will be language barriers, cultural differences, instability, and conflicts.

I also encourage young women to gain as much new experience as they can. This year, I am turning 45, and I am still keen to get new experience in life. For young women peacekeepers, they have sufficient time to explore possibilities and reach their full potential. It is my sincere hope to witness more women and girls from the next generation in Indonesia join UN peacekeeping missions. The role of women in building international peace is increasing, but needs more of us to step up.

Related News
24/11/2021
Take five: “The justice system must be responsive to persons with disabilities.”
05/04/2022
New report: To combat violent extremism in South-East Asia, the study calls to step up regional efforts to implement gender-responsive strategies
02/02/2022
Indonesia Peace Festival
22/12/2021
In the words of Police Lieutenant Colonel Melbeth Mondaya: “Protection and education for girls is especially important because they are the key to women’s empowerment.”
11/12/2021
The UN in Indonesia Is Holding a ‘Comedy for Equality’ Showcase with Award-Winning Comedian Sakdiyah Ma’ruf
END_OF_DOCUMENT_TOKEN_TO_BE_REPLACED