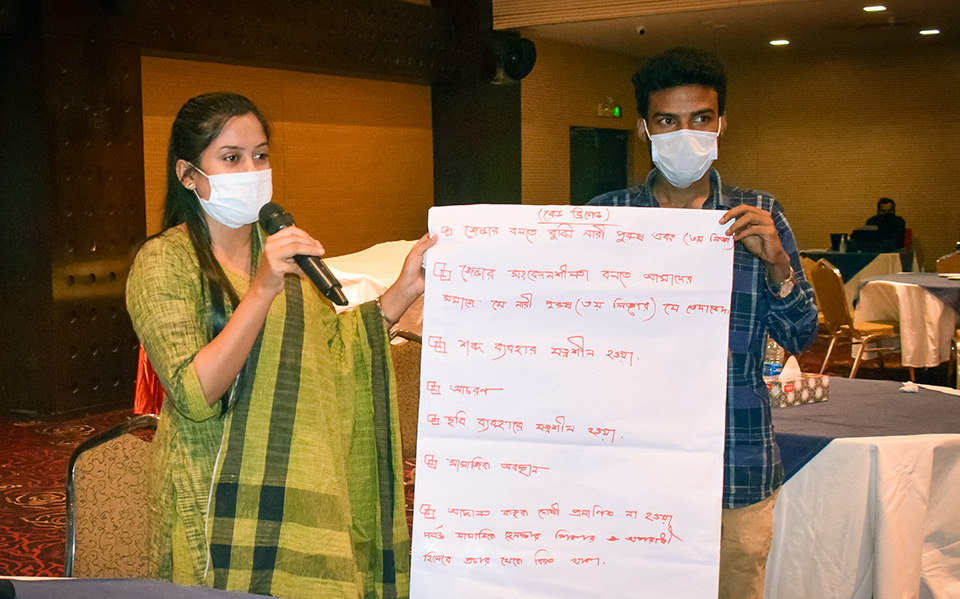 Journalists do an exercise at during the workshop on gender-sensitive journalism on 24 June 2021 in Cox’s Bazar, Bangladesh. Photo: UN Women/Abdul Saboor Golap

Cox’s Bazar, Bangladesh — Thirty Bangladeshi journalists have learned from UN Women and Deutsche Welle Akademie trainers how to write about women in more sensitive and empowering ways.The 22-24 June workshop encouraged a “gender-responsive journalism” in which, for example, journalists writing stories about crimes against women protect the woman’s privacy and focus on solutions instead of just preventing her as a “victim”.

“When journalists victimize a woman in the breaking news, not only the woman, but also the whole nation is insulted,” said Deepak Sharma Dipu, one of the journalists in the training.

Said Ahsan Suman, who works for SA TV, “Our most important lesson to take back with us is how we, as journalists, can help to contribute to peace and equality within our communities.” 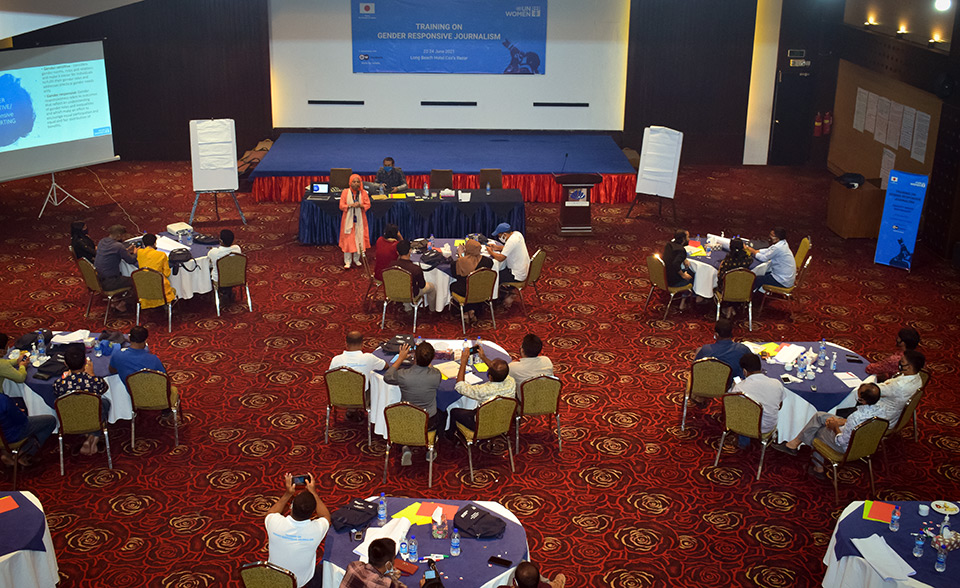 The workshop focused on the importance of gender equality in the journalism profession, equal representation of women in news stories, and gender-responsive language in reporting.

The Government of Japan funded the training.

The workshop was held in Cox’s Bazar, where hundreds of thousands of ethnic Rohingya people from Myanmar have taken refuge in camps since 2017. Misinformation and negative rhetoric about the Rohingya, Bangladeshi female humanitarian workers and Rohingya volunteers have exacerbated the hostility of the Cox’s Bazar community towards the Rohingya and harassment and threats against humanitarian workers.Marshall said the media need to write about successful and experienced women, rather than portraying them mainly as victims of violence.

Mainul told the trainees: “Women’s news does not necessarily require the word ‘woman’ to be overused in the headlines. Avoiding this overemphasizing would help to decrease regeneration of gender inequality through the media.”

Nadira urged the journalists to focus on empowering women instead of defining them in traditional ways.

The journalists practiced revising articles to make them more gender-responsive and solutions-based. They were urged to pay particular attention to proper research and fact-checking.

“We are working to be more responsive to the way news is presented and the way women are being portrayed in the media,” said Flora Macula, Head of the UN Women Cox’s Bazar Sub-office. “The media can play an important role in establishing gender equality in society.” 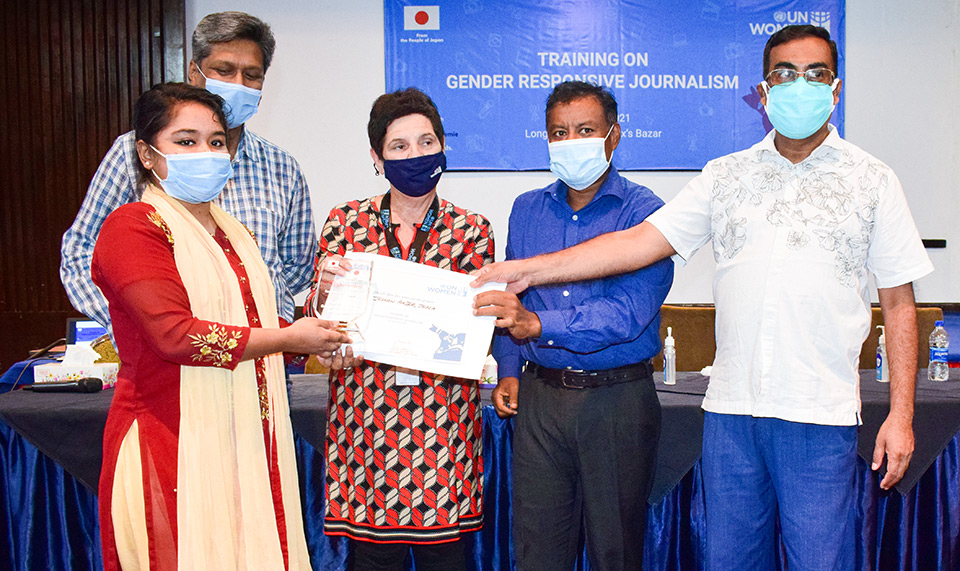 Mohammad Shamsud Douza, Bangladesh’s Additional Commissioner for Refugee Relief and Repatriation, told the workshop participants: “Journalism is a sensitive profession, not just gender-sensitive; sensitivity issues should be considered in every report with all aspects of society. I urge UN Women and all United Nations agencies to conduct such trainings regularly so that the skills of local journalists can be further enhanced.”

Related News
01/02/2022
In the words of Tarikul Islam
02/01/2022
Rohingya refugees in Bangladesh join UN campaign against gender based violence
20/12/2021
In Cox’s Bazar, gender-responsive policing efforts build trust with Rohingya women and girls
30/11/2021
Knowledge Hub on Labour Migration in South Asia Launched
26/10/2021
In the words of Mst. Merina Afroz: "I monitor cases of gender-based violence and ensure that justice is served."
END_OF_DOCUMENT_TOKEN_TO_BE_REPLACED