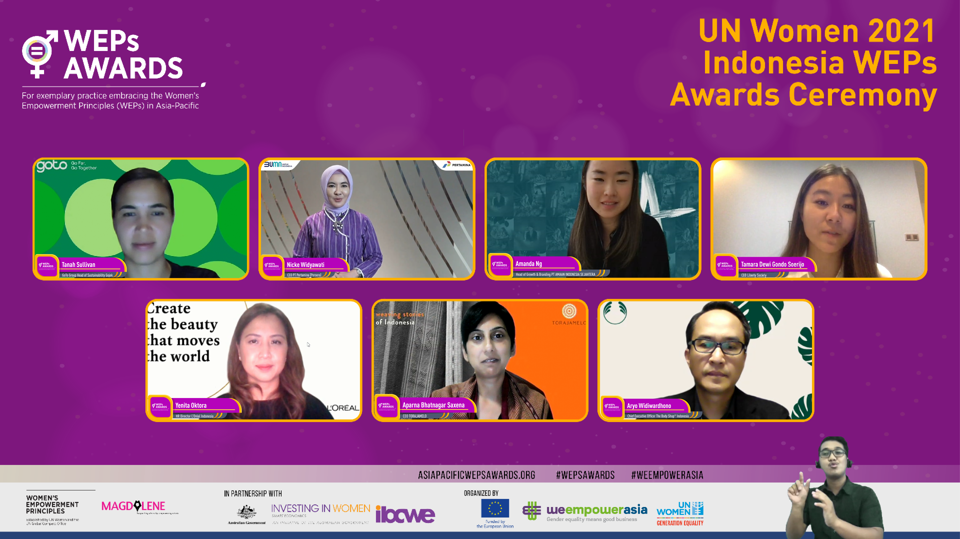 Jakarta, Indonesia – Six Indonesian companies have received Women’s Empowerment Principles (WEPs) Awards in recognition of their contribution to the advancement of gender equality and women’s empowerment.

The winners of the 2021 Indonesia WEPs Awards were announced by UN Women on Friday. The awards are organized by the WeEmpowerAsia programme of UN Women with support from the European Union.

This year’s WEPs Awards received 228 applications from 138 companies, nearly quadruple last year’s number. Among the applicants are state-owned enterprises along with small and medium-sized enterprises (SMEs) across different sectors.

In line with the WEPs Principles, I Gusti Ayu Bintang Darmawati, Minister of Women Empowerment and Child Protection of the Republic of Indonesia, expressed her support for women’s empowerment in her closing remarks. “Eliminating all discrimination against women and closing the gap in gender inequality is a priority for the Government of Indonesia. That being said, we strongly support the WEPs Awards today, which appreciates companies that contribute to women’s empowerment and gender equality.”

Jamshed M. Kazi, UN Women Indonesia Representative and Liaison to ASEAN, emphasized the importance of well-orchestrated efforts to realize a gender-responsive business practice in Indonesia. “The WEPs Awards provides us with momentum to celebrate leaders and companies’ good practices and impacts of implementing WEPs in their business. UN Women greatly appreciates and honours the work of business leaders in their efforts to remove all obstacles that prevent women to live up to their potential. However, this is just an initial step and long road ahead remains to achieve the gender equality in the business sector.” Observing the interest from State-Owned Enterprises today, start-ups and social enterprises that participated, Kazi further mentioned that “UN Women see this year’s awards as the proof of collaborative efforts of government, community, and private sectors to cement the foundation of gender equality and social inclusion, that ensures equal access, equal pay, and equal opportunity where women and men can work in a safe and fair environment.”

The winners for the National WEPs Awards announced were:

Vincent Piket, Ambassador of the European Union to Indonesia and Brunei Darussalam, gave high appreciation to the National WEPs Awards winners for their contribution in taking active roles for advancing gender equality in the workplace, marketplace and community. “Investing in women, business drives growth, productivity and innovation. There is a hard business case for this, besides a moral and human rights objective. Therefore, the European Union is proud to be recognising Indonesian leaders and companies who champion gender equality in the business world,” stated Ambassador Piket.

Shinta Kamdani, board member of the Indonesia Business Coalition for Women’s Empowerment, stated her agreement with tackling the gender inequality as a critical social and economic issue. “Investing in women’s leadership and entrepreneurship is fundamental in promoting gender equality and inclusive economic growth in order to build an equitable society. Being here, we all are winners today for contributing in closing the gender gap at work and business practice.”

The National WEPs Awards Winners will proceed to the next phase of the awards and compete with other companies across Asia-Pacific to be selected as the regional winners, with results to be announced on November 18, 2021.

About the European Union

This category recognizes leaders in corporations who have been instrumental in setting strong corporate commitments inclusive of progressive policies, regulations or practices that aim to promote gender equality in the workplace, marketplace and/or community.

This award recognizes achievements that corporations have demonstrated in adopting all relevant measures in the workplace, including innovative approaches to equal recruitment, support to provide flexible work arrangements, and decreasing the gender pay gap.

This category recognizes commitment of transparency and reporting of gender data that goes beyond minimum requirement and seeks to measure, analyze, and report on performance of their gender policies and practices across the value chain.

This category recognizes young people (under the age of 35) who have made significant contributions to promoting gender equality in the workplace, marketplace and/or community.