In a Myanmar village, a man will try to change men’s culture

Ko Aung Lin, a father of three boys, knows exactly what violence against women is because he has committed it himself. Illustration of Ko Aung Lin by UN Women/Lesly Lotha based on a photo by UN Women/Nan Sanhom

Sittwe, Myanmar — Ko Aung Lin, a father of three boys, knows exactly what violence against women is because he has committed it himself. “I once hit my wife when we quarreled, and I never thought it was wrong,” he said.

Now Ko Aung Lin has volunteered to try to persuade other men that it is indeed wrong, that the domineering-male tradition and culture that they grew up in needs to be changed..

Ko Aung Lin, a 36-year-old famer and a member of the Mro ethnic group, lives in Ah Htet Myat Lay village, Ponnagyun Township, in Sittwe of Rakhine state in Myanmar’s far west. He is the only man among the 10 volunteers chosen in Rakhine for a joint project by UN Women and United Nations Population Fund to prevent violence against women and girls and help survivors during the COVID-19 pandemic. COVID-19 restrictions delayed the start of the project..

The 2021-2023 project also includes another conflict-affected state, Kachin state in the north. It is supported by the United Nations Central Emergency Response Fund and implemented by Finn Church Aid of Finland..

Under the project, Ko Aung Lin and the other volunteers received training in November on gender norms, gender-based violence and social power dynamics. This month, they will do community outreach sessions to spread these messages to a total of about 400 people in 20 villages in Ponnagyun Township. The project also involves helping 740 survivors of violence get work and earn incomes and giving cash transfers to another 420 survivors and women at risk of violence so they can be better protected. In addition, the project will refer survivors to legal counsel and psychosocial support services. 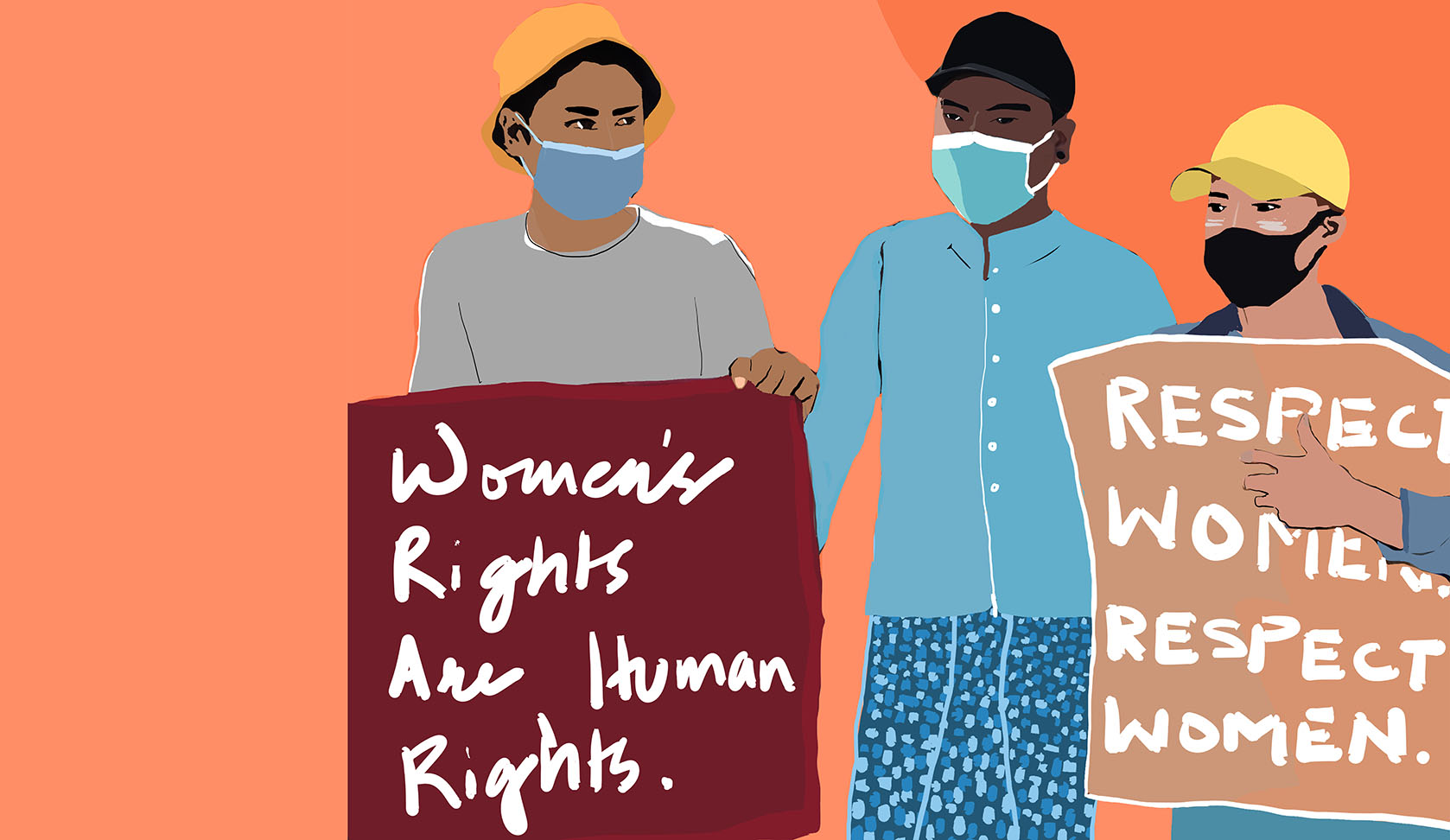 Ko Aung Lin is a father to three young boys and he is determined to teach them how to respect women and girls. Illustration: UN Women/Lesly Lotha

Violence against women appears to be an all-too-common problem in Myanmar. At least 21 per cent of ever-married women have experienced physical, sexual or emotional violence from their spouses, according to the Myanmar Demographic and Health survey of 2015-2016. The survey said only 7.8 per cent of survivors 15-19 years old had sought help.

Ko Aung Lin said the volunteers’ training made him think more about on his own actions and attitudes. He said that he will focus on men and boys when he does the outreach sessions in his village..

“Being a man myself, I think it will be easier to organize and facilitate this session, and they can also relate to me,” he said.

“Men think that once you marry a woman, you own her, and that if she doesn’t listen to you, you can blame her and hit her,” he said. “This thinking needs to change. It will be challenging, but to advocate to men and boys to change their perception needs a consistent long-term approach.”

Ko Aung Lin said his culture sees a woman’s role as being a wife who bears and cares for the children. He said that violence between married couples is common in his village but “men do not think that gender-based violence issues need to be brought up for discussion.”

He described instances in which husbands could not control their tempers or drank too much, broke the doors when they came home, and beat their wives. In one case, a man beat his wife unconscious.

“Rather than reporting the cases, people pay money or offer livestock to the survivors to solve the issues,” he said. “These practices need to change because the survivors do not get justice through this traditional solution.”

“My sons are very young, but I will teach them to respect women and girls,” Ko Aung Lin said. “As their father, I have to make myself a good example for them and show respect to my wife and to them, and not use violent means.”