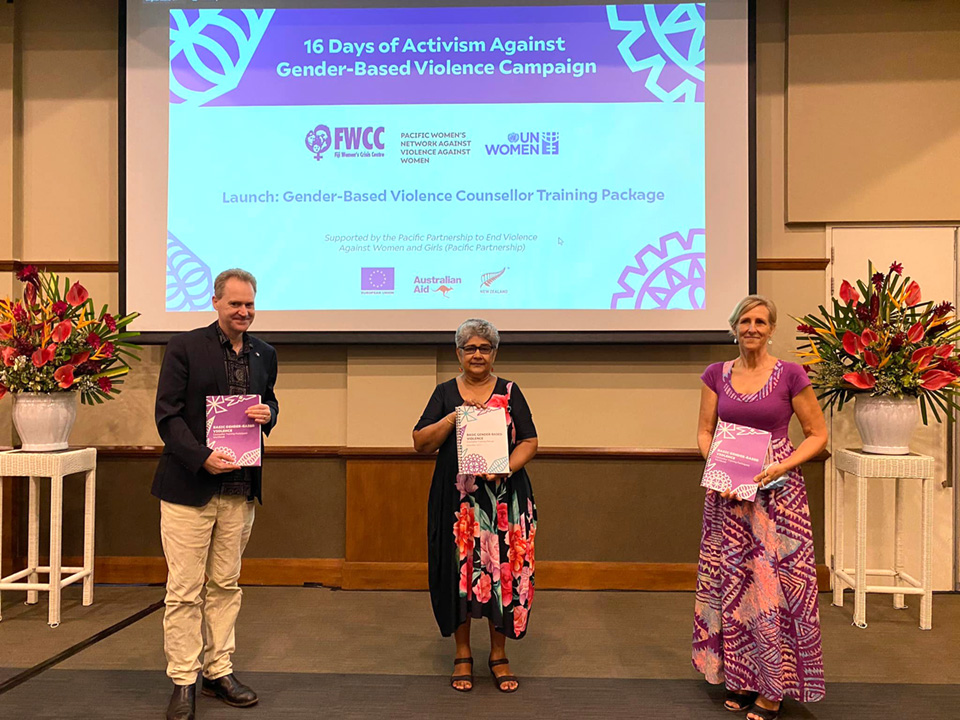 Suva, Fiji – 29 November marked the culmination of progressing decades of work towards standardising approaches to gender-based violence counselling in the Pacific, led by the Fiji Women’s Crisis Centre (FWCC) in partnership with the Pacific Women’s Network Against Violence Against Women and UN Women Fiji Multi-Country Office.

“In response to a need for a uniform and consistent approach to counsellor training in the region, we at the FWCC, collaborated with the Pacific Women’s Network Against Violence Against Women, and UN Women in adapting the counsellor training materials previously developed and used by FWCC across the region over the last three decades, for this training package. The package has been adapted to be used by new and experienced trainers from Pacific Island Countries working on violence against women and girls and women’s human rights. We are pleased to launch this on International Women Human Rights Defenders Day, during the 16 Days of Activism Campaign,” said Shamima Ali, Coordinator, Fiji Women’s Crisis Center, and Pacific Women’s Network Against Violence Against Women Chair.

The vital work of gender-based violence counsellors who persist to support survivors despite challenges, even when they are at risk themselves, was also acknowledged.

“Ending violence against women and girls is a high priority for Australia, which is reflected in our ongoing support to partners like FWCC and this is why we are increasing our support for regional gender equality through the new A$170 million Pacific Women Lead program,” said Australia’s Deputy High Commissioner to Fiji, Mr Paul Wilson.

“The program complements our bilateral gender partnerships and will focus on women’s leadership and women’s rights, including safety, health and economic empowerment.” Mr Wilson encouraged “all members of our society, including men and boys, to transform gendered social norms, attitudes and behaviours to eliminate gender-based violence — this is a shared challenge”.

The Pacific Women Shaping Pacific Development’s Review of Counselling Services in the Pacific Final Report (funded by the Government of Australia) published in 2017 and conducted across 14 Pacific Island countries, identified 85 counselling service providers spread across the Pacific, with more than one-third of these based in only two countries – Fiji and Papua New Guinea. Only limited counselling services were available in most other Pacific Island countries. In responding to gender-based violence, it was imperative that counselling takes a rights-based, survivor-centred approach that builds, maintains, and provides a high-quality standard of service.

Training methods are highly participatory and use both small group and extensive group discussions. Participants are asked to practice the skills during the sessions and reflect on their own experiences and beliefs, enabling them to develop an impartial and empathetic application of the learned skills.

The roll-out of this package will be supported by the three agencies, with gradual and staggered trainings across the region as countries work to align this curriculum with other national training and learning activities.

Simultaneous launch events are planned for Tonga and Kiribati by the Women and Children’s Crisis Centre (Tonga) and the Kiribati Ministry of Women, Youth, Sports and Social Affairs with the Kiribati Women and Children’s Centre, respectively. The Vanuatu Women’s Centre and the Solomon Island’s Family Support Centre together with the Solomon Island’s Ministry of Women, Youth, Children and Family Affairs are also at the planning stage for launches in their respective countries.

Fiji Women Crisis Centre (FWCC) and Pacific Women’s Network Against Violence Against Women (PWNAVAW)
In 1992, FWCC facilitated and hosted the first Pacific Regional Meeting on Violence Against Women in Suva comprising of women human rights defenders from 15 Pacific Island countries. The inaugural meeting led to the establishment of the PWNAVAW.

Since its establishment, the PWNAVAW, recognised as the leading network on ending violence against women and girls in the region, has brought together decades of collective expertise, networks and knowledge on ending violence against women and girls in the region, to support the efforts of Pacific governments, national, regional and international CSO and NGO networks and development partners to lift, build and maintain the quality and standards for gender-based violence and counselling services across the Pacific region. It has served as a support mechanism for women in the Pacific who are working in gender-based violence and human rights. This, in turn, is reflected in the emergence of many counselling centres in the Pacific region including in Kiribati, Niue, Papua New Guinea, Samoa, Solomon Islands, Tonga, Tuvalu and Vanuatu.

The PWNAVAW has a membership of 129 organisations in 13 countries across the Pacific and is deeply rooted in the principles of feminism, women’s human rights, gender equality and the elimination of all forms of discrimination and violence against women and girls.

Pacific Partnership to End Violence Against Women and Girls (Pacific Partnership)
The Pacific region has some of the highest rates of violence against women recorded in the world – twice the global average with an estimated two in every three Pacific women impacted by gender-based violence. Along with high rates of violence – a grave human rights violation - women and girls in the Pacific region experience constant and continual inequalities including low levels of participation in decision-making, limited economic opportunities, and restricted access to critical services and rights.

Related News
08/03/2022
UN Women Fiji MCO and Oceania Football Confederation ‘kick-off’ new partnership to progress gender equality and address violence against women and girls.
22/12/2021
Press Release: Ministry Welcomes ICT Boost to Progress Gender Equality in Fiji
30/11/2021
In the words of Sani Daoni: “I struggled with people who had power over me. Still, I was using the power to control people closest to me.”
30/11/2021
In the words of a survivor who now helps other survivors: “After 19 years, I woke up. I stood on my own feet.”
30/11/2021
In the words of Reverend Jone Tuiwaiwai: “There are things that God gave us that we cannot change, but our social roles is not one of them.”
END_OF_DOCUMENT_TOKEN_TO_BE_REPLACED