The house of Fatimah Gul in northern Pakistan after the torrential monsoon rains and flood. Photo: UN Women/Aziz Ullah

When the recent floods hit Fatimah Gul’s house, everything happened so quickly that she was unable to bring any belongings or food supplies. The elderly widow lost most of her belongings when her village was one of the very first to be hit by floods in Swabi District of the northern province of Khyber Pakhtunkhwa. 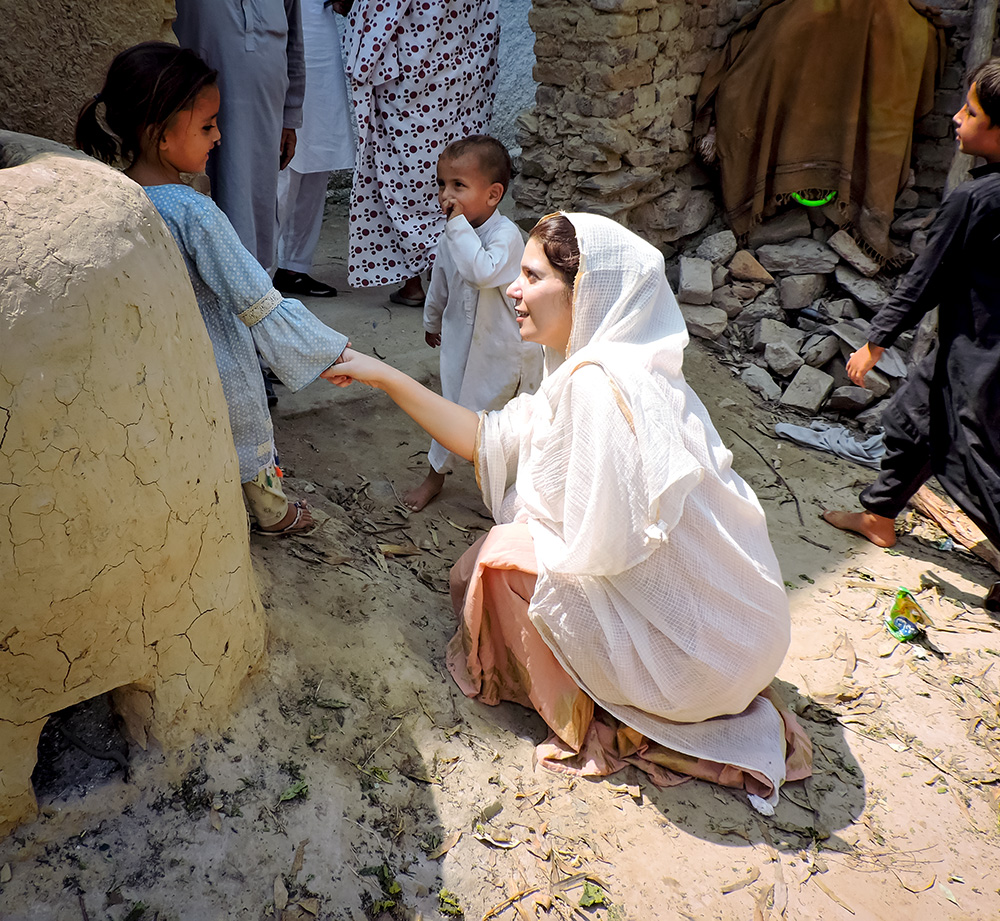 “This sudden flood has destroyed everything in my life,” said Fatimah with tears in her eyes. “I don’t have utensils and clothes. My bed and house are damaged.” She was already living on zakat (charity money) and suddenly left with nothing. She cannot afford to rebuild nor has she any income to survive.

Fatimah is one of many women affected by the record floods in Pakistan. Most victims of natural disasters are the poor, and particularly women. The recent climate-changed floods in Pakistan have shown that the country is no exception. Heavy monsoon rains since June have left up to one third of the country under water, affecting 33 million of the country’s estimated 240 million inhabitants. Some 6.4 million people are estimated to need of assistance.

Disasters such as this are worse for women, girls, and women with disabilities. They face the biggest challenges including access to humanitarian assistance. Furthermore, the needs and vulnerabilities of women and girls are often distinct during disasters.

UN Women Pakistan is putting women like Fatimah at the heart of its flood response. So far, UN Women has distributed non-food items for immediate relief, including shelter, kitchen utensils, medical aid, and sanitary products for flood-affected women in Swabi.  In addition, providing cash grants worth PKR 20,000 (USD 91) each to the most vulnerable women including young girls, women headed the house, women without income and women with disabilities

Another woman from the same village as Fatimah, Romania Bibi, says she feels exposed to danger and her privacy can no longer be maintained. Half of her house was damaged during the floods. “I cannot sleep at night because flood damaged the boundary walls of my house. I am using bed sheets to cover the broken walls,” said Romania.

In the coming days, UN Women plans to scale up its flood response to provide life-saving relief in Sindh and Balochistan provinces and the Gilgit-Baltistan region. The scaling services include temporary women’s centres, and services for the prevention of and response to gender-based violence (GBV), with a focus on psychosocial support to GBV survivors.

The scale of this disaster is overwhelming. There are many cities, towns, and villages in the same situation. Help the flood-affected women by supporting UN Women: Help Pakistani flood victims now | UN Women