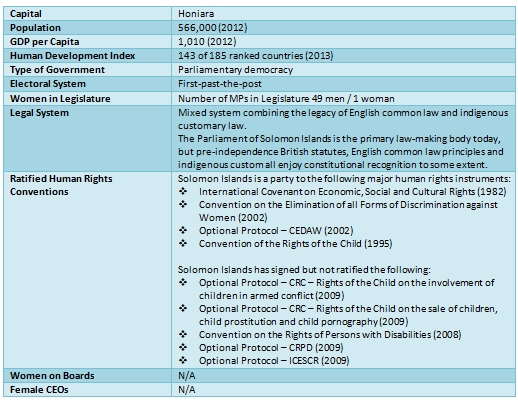 Solomon Islands is a Pacific Island country situated north-east of Australia and west of Vanuatu. With a total land area of 28,370 sq. km, Solomon Islands is the third largest country in the Pacific region and comprises six main islands and numerous small islands stretching over 1,300sq.km of ocean[1]. The country is relatively well endowed with natural resources, in particular forests, fresh water, marine and fishery resources, minerals and agricultural land, however, these resources are far from evenly distributed across the country’s nine provinces[1].

Solomon Islands currently has no domestic violence or family legislation.  Legally, the definition of rape is limited to sexual intercourse, and girls 15 years and older can be held criminally responsible for incestuous relationships. Marital rape is not a criminal offence in Solomon Islands.

The common law rules requiring proof of resistance in order to be able to establish lack of sexual consent are still applied, and defence can be mounted on the basis of reasonable belief that a victim was of the legal age of consent.

Customary law has constitutional status in Solomon Islands, and customary practices influence formal criminal and civil procedures. Constitutional rights to freedom from discrimination, including on the basis of gender, are also applied subject to customary law, even where customary law has discriminatory effect.  For example, the Court of Appeal held in 1995 that a widow’s right to inherit a share of her late husband’s assets was subject to customary law, which prevented her from receiving the funds because of her gender. The Court of Appeal also held that the constitutional protection of customary law allowed Provincial Councils to be structured so as to allow all-male membership, again overruling the provisions prohibiting discrimination on the basis of gender.

Criminal charges are rarely brought against those accused of sexual violence. This is largely due to bias, both legal and social, towards more informal, non-punishment based solutions, which are often based on cultural taboos on speaking about sexual violence and exploitation. Additionally, magistrates have been known to stop criminal proceedings relating to marital rape if the couple has reconciled. In the 10 years to 2008 only 184 cases of violence against women were brought before the courts.

The minimum marriageable age is 15 for both men and women while the Convention on the Elimination of all Forms of Discrimination Against Women (CEDAW) recommends 18 years as the earliest acceptable age for marriage for both genders. Customary marriages, however, are exempt from registration and statutory age restrictions (in non-compliance with CEDAW).  Statutory rape is therefore difficult to prosecute.

In 2011 Amnesty International reported that lawyers from the Public Solicitor’s Office had refused to represent victims of domestic violence unless they had visible injuries.

Abortion is criminalised in Solomon Islands.

In Solomon Islands, women have had full suffrage since 1974, however, historically there have only been two women elected to parliament. Women’s participation in the electoral process is low by global standards.

In a national survey the most common reason given by both men and women to explain why male candidates always get elected was that it is customary for men to be leaders.

Despite this, two women were appointed to the Truth and Reconciliation Commission created in 2008 to serve as a public forum for analysis of the human rights violations committed during the period of civil unrest. It should be noted, however, that no women were invited to play a role in peace negotiations, despite the prominent role women’s groups played in serving as peacemakers and mediators during the conflict.

Periods of war and civil unrest are often characterised by high levels of violence against women and Solomon Islands is no different. Amnesty International estimated that between 1998 and 2003, 75% of Solomon Islands women suffered some form of direct personal trauma, including rape, armed violence, threats of armed violence and the death of family members. Additionally, a large number of Malaitan women were raped in direct connection with the inter-communal violence during this period, as a deliberate tactic designed to humiliate the enemy.

Approximately 73% of women and men believe that violence against women can sometimes be justified.  Additionally, some cultural traditions require married female rape victims to pay compensation to their husband’s family, to make amends for the shame incurred when she was attacked.

Sexual violence and exploitation by residents of logging camps against women and children is an increasingly common problem, including child prostitution, early marriage and the consumption and production of child pornography. There are also reports of child sexual exploitation perpetrated by overseas fishers. About 37% of women reported that they had been sexually abused before age 15, and 91% of parents reported that they had heard of children being involved in prostitution in Solomon Islands.

Women are routinely excluded from participation in the formal economy due to a reliance on subsistence agriculture and traditional beliefs about women’s roles. When they are part of the labour force, women are overrepresented in poorly paid, non-skilled labour, largely due to their lower levels of education and literacy and poor access to skills training.

While enrollment rates for girls in primary school are approaching parity, secondary and tertiary enrollments are consistently lower for girls than boys throughout Solomon Islands’ education system. In addition, enrollment at rural schools is weighted in favour of boys. A 2008 survey also found that women were twice as likely as men to have no education (14% and 7% respectively).

About 60.4% of the Solomon Islands’ female population is in employment, compared to 72.2% of men, with over three-quarters of these women participating in subsistence work (76.2%) compared to 58.1% of men.  As of 1999 only around 30% of Solomon Islands women in employment were engaged in the non-agricultural sector. Women also make up less than 30% of the public service, and hold just 6% of senior public service positions.

Women are responsible for the production of the majority of subsistence foods and also make up the vast majority of market vendors, while men tend to be more involved in the production, sale and marketing of more financially lucrative cash crops.

Access to land, including land title ownership, is also an issue for Solomon Islands women who wish to become economically active. About 73% of Solomon Islands land title is held by men, with only 2% of land in the hands of women. Additionally, tenancies can be insecure and difficult for women to obtain. Although five of the nine Solomon Islands provinces traditionally engaged in matrilineal property inheritance, women’s traditional property rights are increasingly ignored or marginalised as they come into conflict with the demands of large-scale logging and extractive industries.

Markets established outside Honiara by local women’s groups were instrumental in improving relations between Guadalcanal and Malaita people, and materially contributed to the calming of ethnic tensions and eventual cessation of violence.

Solomon Islands has one of the highest rates of malaria infection in the Pacific region, and this continues to be a major health concern for pregnant women and children under five. In 2005, cardiovascular diseases, neoplasms, malaria, respiratory diseases and neonatal causes were major causes of mortality.

Infectious diseases are the major causes of morbidity and mortality in Solomon Islands, but there is some evidence that non-communicable diseases like cancer (cervical and breast cancers are reported to be the most common, followed by lung cancer), diabetes mellitus, hypertension, mental illness and risk factors such as tobacco use, chewing of betel nut, obesity, and alcohol abuse are increasing. Approximately 49.5% of Solomon Islands women are identified as physically inactive, and 93.9% have low consumption of fruit and vegetables.

Solomon Islands has a critical shortage of all healthcare workers. While skilled birth attendance is reasonably high, the maternal mortality rate also remains quite high, sitting at 70% (100 per 100,000 live births), which indicates a possible need for the more rigorous training of birth attendants. The adolescent birth rate also remains reasonably high by regional standards, at 67 per 1,000 women. Among sexually active women, contraceptive use has increased from 7% in 2001 to 35%, however, 11.1% of women continue to indicate an unmet need for contraception.

The country currently has low rates of HIV/AIDS infection, although chlamydia and syphilis are endemic among pregnant women, indicating their high potential for vulnerability to HIV. Gender inequality is identified as the primary cause of women’s high rates of sexually transmitted infection, attributable to early marriage, high levels of sexual violence, culturally sanctioned male infidelity and women’s lack of negotiating power in sexual relationships.

Most people live along the coast, but with recent increases in rising sea levels, most communities have begun processes for re-settling inland[1].

Advancing Gender Justice in the Pacific (AGJP) Programme: UN Women continues building the capacities of its government and civil society partners for implementation and reporting around CEDAW, particularly when it comes to adopting a harmonised human rights reporting and implementation  approach. UN Women will also support the government in developing evidence-based access to justice programmes in order to increase access to gender responsive legal systems for rural, urban and marginalised women.

When it comes to women’s political participation, UN Women is providing capacity building for women candidates utilizing a transformational leadership approach. UN Women is also  supporting advocacy initiatives. The programme is supporting the government in the development of its National Action Plan on Women, Peace and Security, while also providing training for Women, Peace and Security advocates.

Ending Violence Against Women (EVAW) Programme: Through the Pacific EVAW Facility Fund, UN Women supports focused action on the prevention of and response to violence, exploitation and abuse of women and girls in Solomon Islands. The fund provides financial and technical support to organisations addressing EVAW throughout the country and supports capacity development among government and civil society partners in order to provide multi-sectoral and survivor-focused VAW services. The grants facility component enables direct outreach to marginalised groups and VAW survivors with better access and availability of VAW services, information, knowledge on human rights and equality.

UN Women’s EVAW Programme has also led the formulation of the UN Joint Programme document on EVAW in Solomon Islands. This initiative brings together the government, UN Agencies (ILO, UNDP, UNFPA, UNICEF, WHO and UN Women), civil society and other development partners to strengthen efforts to end violence against women and children. This programme focuses on assisting the government in implementing its National Action Plan on Ending Violence against Women.UN Women provides stakeholders with access to virtual knowledge platforms, tools and evidence-based resources in order to better equip them with the knowledge and evidence to advocate for strengthened EVAW legislation, improved policies and services for violence against women survivors. The EVAW Programme, in collaboration with partner organisations, aims to inform women and girls about the availability of VAW services and to support social transformation through campaigns such as the United Nations Secretary General’s UNiTE to EVAW and Say NO-UNiTE.

Women’s Economic Empowerment (WEE) Programme: Through this programme, UN Women supports Solomon Islands in producing knowledge management products in order give decision-makers access to nationally-generated and disaggregated data and statistics on women’s economic opportunities through improved and comparable evidence on the economic situation of women in Solomon Islands.

UN Women is implementing the Markets for Change (M4C) project, which is aimed at ensuring marketplaces in rural and urban areas in Solomon Islands are safe, inclusive and non-discriminatory environments, promoting gender equality and women’s empowerment.

Increasing Community Resilience through Empowerment of Women to Address Climate Change and Natural Hazards (IREACH) Programme: UN Women supports the adoption and implementation of gender equality commitments in strategic documents for climate change and disaster risk management through capacity strengthening with stakeholders and the provision of knowledge products and tools on the gendered implications of climate change and disasters.