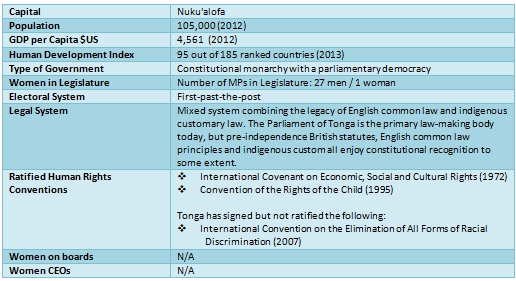 The Kingdom of Tonga (Tonga) is a Pacific Island nation that comprises 176 islands, 36 of which are inhabited[1]. Approximately 70% of Tonga’s population resides on the main island of Tongatapu. Tonga is a young democratic government having recently undergone historic democratic transition and devolution of power from the sovereign to an elected parliament in December 2010[1]. Tonga’s economic structure revolves around five main sectors – agriculture, trade, public administration, tourism and finance[1].

Tonga has no domestic violence, sexual harassment, human trafficking, sex tourism or family legislation in place and has neither signed nor ratified the Convention on the Elimination of all forms of Discrimination Against Women (CEDAW). Tonga has no minimum age of sexual consent, so statutory rape is not a crime. The legal definition of rape is limited to acts amounting to sexual intercourse, and the common law rules requiring proof of physical resistance in order to establish lack of consent is still applied. The defence of  the reasonable belief that a victim was of legal age of consent is also still allowed.

Fault based divorce is practiced in Tonga, and division of matrimonial property in cases of divorce does not take non-financial contributions into consideration. Traditionally, police and community members are known to encourage reconciliation in cases of domestic abuse.

In recent years, Tonga has pursued national planning measures in support of its women. A national Gender and Development (GAD) Policy was adopted in 2001 and reviewed in 2011. The policy notes that cultural attitudes that assign women a lower status than men persist, with some limited exceptions such as mehekitanga (eldest sisters)[1]. To address this issue, the GAD policy advocates awareness-raising and attention to the school curriculum as a way of overcoming stereotypes[1]. In 2010, the Government introduced a new policy allowing women maternity protection in the civil service and initiated nationwide consultation on the potential ratification of CEDAW[2]. In 2011, the government directed the drafting of legislation covering violence against women[2].

More than two out of every three (68%) women in Tonga reported that they had experienced physical violence by someone other than a partner since they were 15 years old. Approximately 6% all women reported experiencing sexual violence  from the age of 15. Approximately 8% of all women reported experiencing sexual abuse before they were 15 years old. Most women who reported physical violence by non-partners reported that this had happened more than five times – by far the most common perpetrators were fathers and teachers.

Tonga has adopted a “no drop” policy which stipulates due process for such cases once they are reported. An average of 23 cases is reported monthly to police[1].

About 75% of abused women never sought help from formal services or people in authority. If they sought help, usually when the violence was severe, it was most commonly from health services (12%), the police (12%), or religious leaders (8%).

Tonga predominantly relies upon subsistence agriculture, the primary source of livelihood for approximately 70% of the population. Overseas remittance also accounts for a large percentage of gross domestic product each year[2]. In the formal sector, the public service is the largest employer[2]. Women account for 43% of income earners in subsistence farming and in work for pay and operating their own business.  Women account for 39% of the Tongan non-agricultural labour force. Handicraft production is a primary employer of women (up to 80% of women on outer islands), along with agriculture and subsistence fishing. There is a significant salary and income gap under which Tongan women earn on average only 47 per cent of what men earn[1].

Tongan girls are underrepresented in primary education, with a Gender Parity Index of 88 (well below the developing country average of 96). In secondary and tertiary education ratings improve (at 97 and 98 respectively), however, Tongan women still account for only 39% of the non-agricultural workforce.

Obesity, diabetes and cardiovascular diseases have increased to epidemic proportions – the average weight for a Tongan male has increased over 30 years by 17.4kg to 95.7kg, while the average weight for a woman increased by 21.1kg to 95.0kg during the same period. Tongan women have higher rates of diabetes than men, with 19.1% of women and 16.5% of men meeting the definition of diabetic. World Health Organisation indicators for women and health indicate that non-communicable disease pose significant risk to Tongan women’s health. In 2008, at least 70.3% of the female population were at risk of suffering from obesity, with at least 90% of the population considered overweight.

Annual and seasonal maximum and minimum temperatures have increased in Nuku’alofa since 1950, at a rate of 0.10°C per decade. Satellite data indicate the sea level has risen near Tonga by about 6mm per year since 1993. The global average is 2.8-3.6 mm per year. This rise is partly linked to a pattern related to climate variability.

Children and youth, the populations on the outer islands, and widows and single mothers have been identified as most vulnerable to the differential impacts of disasters and of climate change[1].

Advancing Gender Justice in the Pacific (AGJP) Programme: UN Women focuses on promoting women’s political participation and representation through the transformational leadership approach. UN Women provides capacity building for women candidates, undertakes advocacy initiatives and is supporting a diagnostic study for the recent elections. It is also supporting the government in developing evidence-based access to justice programmes in order to increase the access rural, urban and marginalised women have to gender responsive legal systems. UN Women is providing technical assistance to the government for ratification of the Convention on the Elimination of all forms of Discrimination Against Women, as well as adopting a harmonised human rights treaty reporting process.

Ending Violence Against Women (EVAW) Programme: This programme continues to focus on the prevention of and response to violence, exploitation and abuse of women and girls in Tonga through its Pacific EVAW Facility Fund. The fund provides financial and technical support to organisations addressing EVAW throughout the country and supports capacity development amongst government and civil society partners in order to provide multi-sectoral and survivor-focused VAW services. The grants facility component enables direct outreach to marginalised groups and VAW survivors with better access and availability of VAW services, information, knowledge on human rights and equality.

UN Women provides stakeholders with access to virtual knowledge platforms, tools and evidence-based resources in order to better equip them with the knowledge and evidence to advocate for strengthened EVAW legislation, improved policies and services for violence against women survivors. The EVAW programme, in collaboration with partner organisations, aims to inform women and girls about the availability of VAW services and to support social transformation through campaigns such as the United Nations Secretary General’s UNiTE to EVAW and Say NO-UNiTE.

Women’s Economic Empowerment (WEE) Programme: UN Women supports evidence-based decision-making at the government level when it comes to gender responsive budgets and plans through the production of nationally-generated disaggregated data and statistics on women’s economic situation.

Increasing Community Resilience through Empowerment of Women to Address Climate Change and Natural Hazards (IREACH) Programme: UN Women supports the adoption and implementation of gender equality commitments in strategic documents for climate changes and disaster risk management through capacity strengthening with stakeholders and providing knowledge products and tools on the gendered implications of climate change and disasters.

RESPECT Workshop Viet Nam: Framework boosts progress on Preventing Violence against Women and Girls
Vietnam Airlines launches orange flights to raise awareness of violence against women
Statement: The decree barring women in Afghanistan from working in non-governmental organizations is yet another stark violation of women’s rights
16 days in PNG: Raising the voices of women living with HIV
We must be loud: Youth addressing the Elephant in the Room
END_OF_DOCUMENT_TOKEN_TO_BE_REPLACED