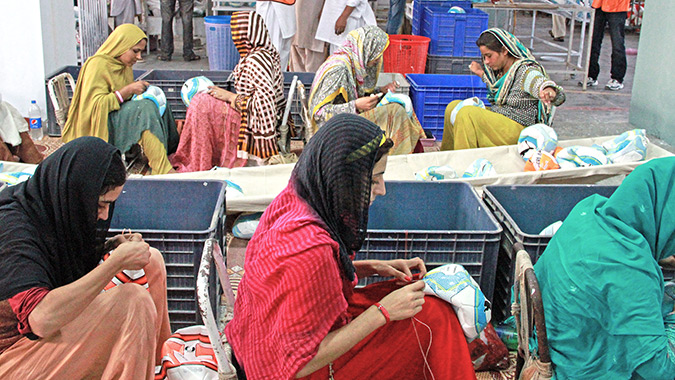 The nature and quality of work as well as remuneration is an important incentive for women workers. Photo: UN Women Pakistan

Ever heard of the term “the working poor”? Sounds contradictory, but women comprise a large portion of that segment in Pakistan’s working population. The reasons for this include limited opportunities, low wages, insecure work, and social gender norms as well as the tendency of national and many international donor programs to conflate economic opportunity for women with traditional skills which keeps women stuck in a cycle of impoverishment. Without economic opportunity, empowerment of women is at a far reach.

The status report on Women’s Economic Empowerment in Pakistan looks at trends in women’s employment by geography, sector, age and hours worked. These trends are analyzed with regards to what they indicate about the contextual factors that come into play in limiting women or preventing their entry into the workforce. This section only examines those part of the labour force that are between the ages of 15-64, careful to leave out child workers. The results do not seem to confirm the optimistic economic forecasts for the country or to reveal encouraging results of policies for enhancing women’s economic participation.

Where Do We Stand Then?

Less than 30 per cent of all women are in the labour force which as an indicator of opportunities available to women, or a lack thereof, paints a dismal picture. A staggering 41 million women in the age group 15-64 are not being counted as contributing members to the economy. By sector, 73 per cent of the 26 per cent of women in the labour force are in the agriculture, forestry, hunting and fishing (Labour Force Survery 2014-15). These numbers are important, because non-agriculture wage employment is seen as an indicator of improved economic circumstances of women. From the above figures, the women seem to be most heavily engaged in the sector with the least payoff and an overall increase over the years in the number of women engaged in vulnerable employment. In these jobs, women are frequently paid below minimum wage and have to work long hours. Despite women receiving higher education, the number of women in managerial positions and working as professionals remains low.

What this points to is the huge gap between the policies which acknowledge women as contributors, but that do not appear to be successful in removing barriers to their participation in the economy.

Furthermore, the tendency is to pin the brunt of the responsibility on social gender norms for this, which discounts the fact that women are employed in hazardous jobs, night shifts, and girls as young as 8 and 10 years are put to work, sometimes sent away to different cities as domestic help. This can be partly explained by inadequate job opportunities, lack of decent work, missing affordable and reliable public transport and fear of harassment.

Often there is also a trade-off between education, work and transgressing social norms and it is not always worthwhile monetarily and socially. Work is seen as an outcome of economic necessity only for the very poor or those who are relatively less affected by societal mores i.e. the upper middle class, and the educated “elite” women.

Higher Economic Participation Does Not Always Lead to Empowerment

Although economic participation does correlate with a number of positive outcomes like higher involvement in household decision making, better nutrition and higher educational attainment, what it does not guarantee however, is empowerment. This is where contextual factors, both formal and informal that define the parameters and contours of women’s economic participation come into play, limiting their ability to achieve empowerment. The nature and quality of work as well as remuneration is important.

On a whole, there has been a significant increase in women’s labour force participation over the past decade from 19 per cent in 2003/4 to almost 26 per cent in 2014 while those for men have remained steady at around 89 per cent. Regional variations in these figure vary but Punjab and Sindh have demonstrated the highest increase. In Khyber Pakhtunkhwa women’s participation in the labour force fell by 10 per cent which is linked to disasters and crises in the same time frame. The urban and rural women’s labour force participation rates show disparity. In part, the difference between the rural and urban participation rates can be explained by the low percentage of women residing in urban areas nationally (18 per cent). About 32 per cent of the women in the labour force have a college degree or higher and women of the same proportion have no education. The socially accepted explanations for why women do not take part in the labour force are contradicted by the reports findings. Marriage and number of children seem to have little impact on the labour force participation of both men and women. In households with higher number of dependents women are more likely to work, as well as if they are single, if the household head is working and living in rural areas.

Despite women receiving higher education, the number of women in managerial positions and working as professionals remains low. Within this category. Most of the women are working as teachers in primary or secondary school earning a salary barely above the minimum wage. 7.4 per cent of female professionals are working in STEM fields reflecting low graduation rates of women with professional degrees. Top management positions are mostly held by men.

On the bright side, there is an increase in the number of young women between the ages of 15-24 years of age who are obtaining higher education and entering the professional category of the workforce, numbers increasing from 30 per cent to 59 per cent. Many women are involved in the primary sector and the informal economy, therefore a large proportion work from home and can be categorized as homebased workers and their work is labour intensive. 6 per cent of men and 66 per cent of women work for hours that exceed 50 hours per week. More women in the formal sector work excessive hours than men and the reverse is true for the informal sector. Women are also underemployed, especially those who have less than primary level of education. The alarming finding in particular however is that women who have 10 or more years of schooling have a high underemployment or unemployment rate which points to a lack of economic opportunities for them. Higher education, female headed households, and poverty are factors that lead women to enter the work force.

UN Women Pakistan and foodpanda Pakistan collaborate for the promotion of workplace safety and gender equality for women
In the words of Nadesan Suresh: “Overturning conventional attitudes can transform future generations”
A coffee house as a beacon of hope
LinkedIn and UN Women join hands to create employment opportunities for women in Asia and the Pacific
Take Five: “The Voices of Bangladeshi young people on Climate Action are loud and clear. We Need to act now for a better future, and this cannot wait.”
END_OF_DOCUMENT_TOKEN_TO_BE_REPLACED