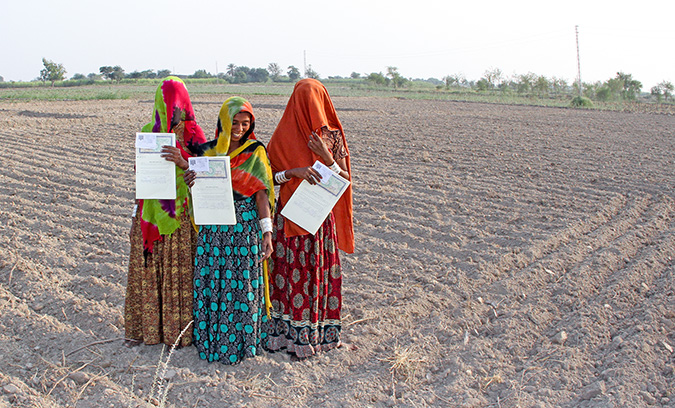 Women are breaking gender perceptions by gaining land tenancy and some degree of control over their productive resources”. Photo: UN Women/Faria Salman

It is widely accepted that poverty cannot be addressed without taking steps to ensure financial inclusion of disadvantaged groups, which includes women in Pakistan. Their right to equality and adequate standard of living depends on their access to productive resources. What this essentially means is increasing women’s access to financial capital like loans and land. The picture in developing countries such as Pakistan appears to be that while the proportion of the population who own bank accounts is low, it is even lower for women. In recognition of this, e-banking solutions are provided for transfer loans and social assistance cash transfers to the poor at low costs. We need to increase women’s access to savings, loans and the financial system in general, because prosperity for women means investing in education, health and well-being of the household since women are known to spend their incomes in these areas.

Empowering Our Women through Financial Inclusiveness

Economic independence is crucial to accord broader empowerment of women, of both social and economic natures. They lead subordinate roles in most spheres of their lives, a situation which can be ameliorated if they are brought on the same footing as their male counterparts in terms of access to economic opportunities and finance. Overall, only 13 per ccent women in Pakistan have access to any kind of loans while 87 per cent men are receiving loans. Increasing women’s access to microfinance has facilitated their access to social services and increased their political awareness. These efforts need to be supported with asset transfers, health services and trainings to ensure that they are on a sustained path out of poverty. Providing women with access to economic opportunity also has a higher effect on their capacity to navigate and sustain against economic or social shocks like loss of livelihood, widowhood, abandonment or divorce.

The status report on Women’s Economic Participation and Empowerment reveals somewhat encouraging developments on this front, although much is left to be addressed still. Both the private and public sectors have taken initiatives to promote financial inclusion of women, for example over the years the number of women’s share of microfinance borrowers and depositors has increased. However, on a whole the figures are not too promising, but it is definitely a step in the right direction.

There are several mechanisms through which women can access finance in Pakistan: Microfinance Banks (MFBs), Microfinance Institutions (MFIs) and the Rural Support Programs (RSPs). MFIs reach women the most, having outreach activities built into their programs. They combine credit provision with different trainings to enhance skills, entrepreneurship and literacy/financial literacy. The RSPs are a separate category of MFIs and women comprise half to two thirds of all borrowers. The distribution of borrowers disaggregated by gender reveals that the number of women who have received loans are only a fraction of the number of the men. Furthermore, of the total number of borrowers only 2 per cent of them are women who have taken loans for Small and Medium Enterprises (SMEs). This indicates the need to promote entrepreneurship amongst female entrepreneurs to help them grow businesses which will also serve to generate employment for more women. Highest female borrowing appears to be from microfinance organizations, standing at 26 per cent.

Ownership of Physical Capital: A Tale of Gendered Perceptions

All over the world, including Pakistan, women’s access to, use of and control over land and other productive resources is closely linked with their poverty. While the obstructions in the path of women’s access to financial capital are complex and context specific they are made worse by inadequate legal standards or ineffective implementation at national and local levels. Discriminatory cultural practices at the institutional and community level also play an important role here. Gendered social perceptions of the roles of both men and women in society influence their access to and control over productive resources. The men are the providers, and women after marriage leave their families to become a part of their husbands’ family. The woman’s family will then for instance be unwilling to give her a large share, and often any share at all, in the family’s land holdings, because it will be perceived as lost to her husband’s family. It is hence crucial to change these perceptions. Higher rates of ownership at an older age indicate receiving inheritance in some cases, or women using their inheritance to jointly invest in property with brothers and spouses. Female land ownership is low across all provinces and is the lowest in Islamabad. While there are regional variations in women’s land holdings, rural women are more likely to be land and home owners than urban women. However, urban women have higher rates of joint ownership for both houses and land. Only Khyber Pakhtunkhwa and Gilgit-Baltistan show ownership rates of 37 per cent and 34 per cent respectively.

Additionally, studies have shown that access to productive assets of women benefits the entire household, improves their positions within the home and gives them confidence and security. Property ownership serves as a means to obtain other productive resources such as credit and serves as protection against financial ruin. The benefits are many, and the need to provide women with financial capital persists.

To view the status report online/download

UN Women Pakistan and foodpanda Pakistan collaborate for the promotion of workplace safety and gender equality for women
A coffee house as a beacon of hope
LinkedIn and UN Women join hands to create employment opportunities for women in Asia and the Pacific
Take Five: “The Voices of Bangladeshi young people on Climate Action are loud and clear. We Need to act now for a better future, and this cannot wait.”
UN Women Pakistan and Nishat Mills Limited (Apparel Division) join forces to promote gender equality and safer workplaces for women
END_OF_DOCUMENT_TOKEN_TO_BE_REPLACED