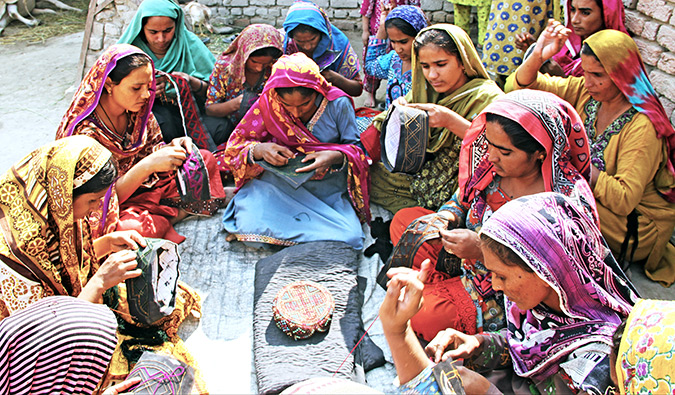 The status report uses the Labour Force Survey’s (LFS) definition of a contributing family worker who is defined as someone who works without pay in cash or in kind on an enterprise operated by a member of her/his household or other related persons. 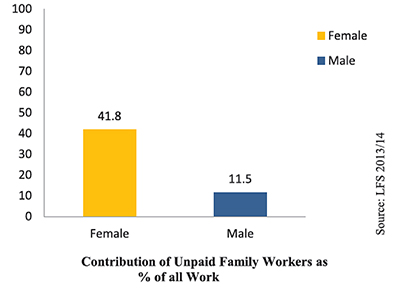 The status report on women’s empowerment in Pakistan estimates their economic contribution using the LFS for the year 2013/14, and the results show that 73 per cent of the unpaid family workers were full time workers while the rest were below full-time with different ranges of work. Additionally, 59 per cent of women and 88 per cent of men were fulltime unpaid workers.

Their economic contribution is measured in monetary terms by assigning wages to the work of the unpaid family workers which is summed up given the number of hours worked and the resulting figure stands at PKR 1065.8 billion.

Women’s contribution is valued at PKR 410.9 billion which is 38.5 per cent of the value of all the unpaid work. The contributions are higher in the rural areas where the majority of the working population is based. Unpaid work predominantly exists in the informal sector where the contribution of women and men is slightly different because of the wage gap. With age both men and women are less engaged in unpaid work and this trend sharply increases between the ages 35-44 for both genders. What happens is that with age the reproductive work related responsibilities of women start to increase while men have to support the needs of their families.

We know intuitively that those who have higher education are more likely to be engaged in paid work as compared to those with middle school education and less as well as those that are illiterate. This is empirically supported as well. The contribution of illiterate workers is the highest, standing at PKR 536.4 billion, with women’s contributions one and a half times more than that of men. Yet the unpaid work of men with a matric degree contributed PKR 102.2 billion in 2013-14 to the national economy. What this illustrates is the difficulty of getting paid employment and the low returns to education.

By sector, unpaid service workers and skilled agricultural workers contribute the approximate equivalent of PKR922 billion per annum through their labour. The agriculture sector with the majority of workers gains the most from unpaid work, and interestingly in this sector the contribution of women and men is almost equal.

Overall, 41.8 per cent of all women’s work is as unpaid contributing family worker as compared to 11.5 per cent of men’s. While the total value of women’s unpaid family work is PKR 411 billion vs PKR 655 billion for men. The reason for this is gender wage differential so even though men’s contribution is a smaller percentage of their overall work, the monetary value of their work is higher.

Impact of Status of Unpaid Work

By attaching monetary value to the unpaid labour of contributing family workers, we can see their enormous potential. Calculated as a percentage of the GDP this invisible work is acknowledged.

If these unpaid workers were actually receiving this amount, higher overall consumption would benefit the economy putting more money into circulation. If the women were paid, then as per the established evidence, wages would be spent on improving the nutritional and education status of the household as well as improving the physical conditions of living. These figures would be higher still if estimations for unpaid care work, primarily done by women, were also included.

Aid activists and a goat farmer tell of how a Sweden-funded project has changed lives in disaster-prone Bangladesh
In the aftermath of crisis, rural Bangladeshi women pursue economic security
UN Women Pakistan and foodpanda Pakistan collaborate for the promotion of workplace safety and gender equality for women
A coffee house as a beacon of hope
LinkedIn and UN Women join hands to create employment opportunities for women in Asia and the Pacific
END_OF_DOCUMENT_TOKEN_TO_BE_REPLACED