Here’s the situation: the majority of people employed in Pakistan are engaged in vulnerable employment. Now, what does that mean? The status report on the economic empowerment and participation of women in Pakistan defines vulnerable employment as the total of own account workers, unpaid family workers, those paid below minimum wage and those engaged in the informal sector. In Pakistan the largest sector is the informal economy in comprising of 73 per cent of all employment and this number has proven to be persistent. Work in the shadow economy is often considered synonymous with vulnerable work because of lack of regulation of any kind as per labor laws, which usually includes lack of provision of social security, job contracts and trade unions. With no access to assets or financial capital, the poor only have their labor to sell, and end up in low paid occupations where there is no job security and excessive work hours and low wages are the norm. Eventually, they often end up in poverty and experience severe deprivations.

The Status on the Informal Sector

The bulk of the working women are employed in the informal sector (about 78 per cent) in Pakistan. As discussed in the previous article in these informatics series, agriculture employs the largest number of people, especially women, and within this sector 73 per cent are employed in informal agricultural work. 75 per cent of men and women are employed in the informal sector of non-agricultural work. Women in this sector are employed mostly in manufacturing and community, social and personal services. Informal work in these sectors, particularly manufacturing is outsourced to small contractors who further outsource it to homebased workers. 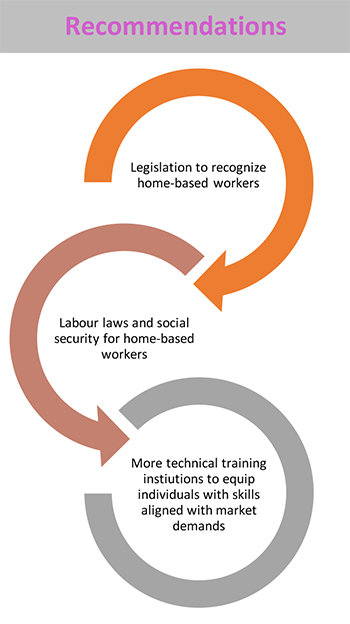 By province, Punjab and Sindh have the greatest number of women earning below minimum wage. Approximately 83 per cent of all women workers earn less than minimum wage in Punjab, compared to 64 per cent in Sindh, 42 per cent in Khyber Pakhtunkhwa and 16 per cent in Balochistan. By sector, skilled agriculture, craft and related work and elementary occupations have the highest number of workers with wage below minimum level. These are occupations where most of the labour force is concentrated and which offer little economic security to those engaged in them.

While education is in theory believed to increase a person’s earnings, particularly above minimum wage, the statistical reality is to the contrary. Looking specifically at women, 30 per cent of female graduates in 2013-14 earned below minimum wage of PKR 10,000 per month. It appears that wages have remained stagnant while the official minimum wage has risen; there has been an increase in percentage of paid workers below minimum wage since 2003/4, even for those with a college degree and more. And more women are paid below minimum wage than men. The deterioration in education standards and individual characteristics can be factors, but even so, such low returns to education are indicative of gender discrimination on the one hand (figures for men are much lower and presumably they are also qualifying from the same schooling systems) and the vulnerability of women to accepting low paid work, seeking work that fits in with reproductive responsibility or doing part time work on the other.

Time poverty, the problem of the century. Time is a scarce and important economic resource that has multiple demands attached to it. People spend most of their hours in a day working to earn a living. After having spent a full day on productive labour, women in particular rather than men have reproductive work and social and community responsibilities at home, leaving them with very little free time for leisure or self-care. According to the status report, on average women who engaged in income generating activities put in 79 hours per week in household chores as compared to 85 hours by women who are not involved in any direct economic activity. According to The Time Use Survey conducted in 2007, the first of its kind which sought to measure time poverty in Pakistan, the incidence of time poverty is 14 per cent and women spend far more time on household maintenance and caring for children than men.

Aid activists and a goat farmer tell of how a Sweden-funded project has changed lives in disaster-prone Bangladesh
UN Women Pakistan and foodpanda Pakistan collaborate for the promotion of workplace safety and gender equality for women
A coffee house as a beacon of hope
LinkedIn and UN Women join hands to create employment opportunities for women in Asia and the Pacific
Take Five: “The Voices of Bangladeshi young people on Climate Action are loud and clear. We Need to act now for a better future, and this cannot wait.”
END_OF_DOCUMENT_TOKEN_TO_BE_REPLACED