WEE in a Humanitarian Context 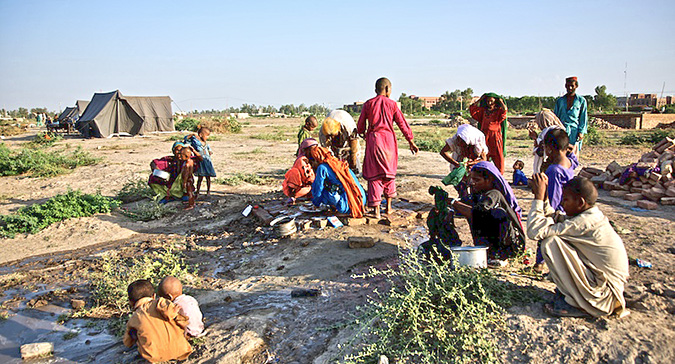 Humanitarian crises may also present an opportunity to enhance women’s skills, in their existing area of work or in new opportunities. Photo: UN Women/Asad Zaidi

Major humanitarian crises have hit Pakistan in the past ten years and have affected women and children the most- 38 million women, men, girls and boys were temporarily displaced and resided in camps and host communities in the neighboring districts and outskirts of towns and cities over the past decade. On a whole, women’s access to economic opportunities and participation in livelihood activities have been impeded. The catch-22 of the matter is that crises are seen as leading to poverty, while poverty is perceived as one of the underlying reasons of conflict, especially by women. Also, crises are not always time bound as one crisis may spill over into a new one and many may overlap.

The figures collated on different types of crises, both natural and emergencies, reveal that most families lose their source of livelihood to them. For instance, in the 2010 floods, 60 per cent of households stated that they did not have a main source of livelihood compared to the 10 per cent prior to the floods. Generally, the women in flood affected districts were engaged in the primary industry and farming in particular. The floods affected their access to markets and damaged their tools are work spaces. Complex emergencies in areas like FATA limit women’s ability to return to work as they leave their farms to go to safer zones, and when they return it is unsafe to work on them.

Vulnerable groups in any context are usually most adversely affected by crises. Women fall into that bracket as a result of their disadvantaged position of women in a changing socio-economic environment. Studies on crises reveal that there are limited options and coping mechanisms available to women and girls in crises. The result - they face a disproportionate brunt of the many burdens of disasters for example in the realm of healthcare like maternal healthcare. Women with disabilities and those belonging to ethnic and religious minorities are likely to suffer much more during these crisis as the anecdotal evidence suggests, but no reliable data exists on these disadvantages groups.

Crises give rise to a host of problems affecting marginalized segments of the population, in particular women, children and people with disabilities. Crises like floods have pushed many people into chronic poverty. Registration and identification is a recurring and persistent concern as well because many people often have lost their documents or did not have CNICs. Furthermore, provision of relief was dependent on having a CNIC for identification, making not having one problematic. In humanitarian crises women and vulnerable populations often face discrimination in assistance in part because relief agencies assume an economic model, which takes the household as the unit of analysis and distribution, rendering women’s share and contributions invisible. Women headed households have also been more likely to have unregistered persons, and women in crises situations are also constrained by social gender norms as well. Displaced women, especially widows and female heads of household have been particularly constrained to claim inheritances, property land and possessions left behind since they often lacked the legal documents in support of their claims in times of crisis. In households where the male head has lost his life, the women are burdened with dual responsibilities of reproductive and productive work. Homebased workers lose their tools and work spaces often to crises, which makes it harder for them to get back on their feet. In addition to losing their incomes, women were unable to pay back the debts incurred in anticipation of wages during harvest season. Women and girls are often also at risk of rape, sexual harassment and higher incidences of violence against them.

How Humanitarian Relief Has Helped

Humanitarian relief efforts by governments on a whole have led to a marked improvement in women’s access and participation in education and economic activities. Female literacy on a whole has shown increase to varying degrees in each of the provinces with the highest being Punjab and Dadu. Primary school enrollments have illustrated a consistent increase in all districts. Utilization of pre-natal care is seen as an indicator for whether the severely affected districts were able to recover from the loss to infrastructure wrought by the disaster/crisis, and all districts have illustrated an increase in provision of maternal healthcare. This can be as a result of the increased attention paid to maternal and child health care by the provincial governments and vertical programs, and the outreach of the Lady Health Workers in the aftermath of a crisis.

Overall, over time crisis responses have become increasingly effective and efficient although gender mainstreaming has continued to be a concern. Gender integration can be subdivided into institutionalization/ gender mainstreaming, building capacity for gender integration, gender sensitive interventions, and women focused interventions. The best relief and rehabilitation practices show that while a number of strategies were adopted to reach women, attention to livelihoods needs to go beyond the stitching skills and related crafts, and handicrafts. 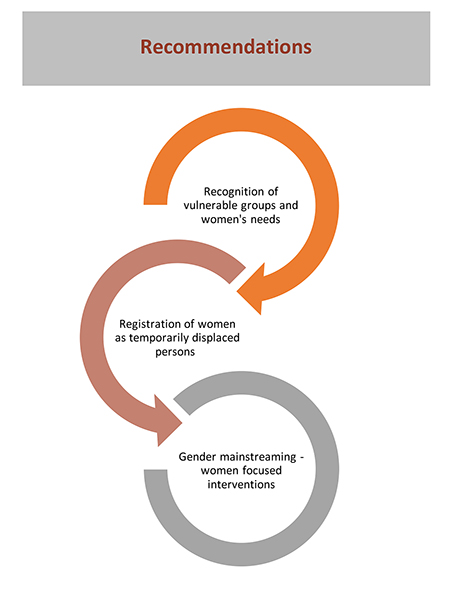 When a crisis occurs it attracts the attention of the government, civil society and the media. National and international donors etc. bring in financial and technical resources. The presence of CSOs, especially those that focus on women and human rights creates awareness and improves access for women and vulnerable groups. The women’s pre-crisis economic activity covered farming, livestock management, sewing etc. The adversity wrought by the crisis may also present an opportunity to enhance women’s skills, in their existing area of work, but also introduce them to new opportunities. Gender roles shift as all hands are needed on deck and women and girls are also engaged in productive activities. There are sometimes extra earning opportunities for people in their place of origin during crises. For example, women and men bonded laborers in Sindh refused to go back to their villages after 2010 floods, because they found alternative livelihood opportunities in the proximity of their new places of abode and also women and men working in the agriculture sector moved to cities after flood 2010-11 and found better earning opportunities especially as wage labor. Women should not be treated as a homogenous group when providing relief and assistance, because access to them is often restricted especially in rural communities and therefore all efforts should be made to have female staff among relief teams to respond in the affected areas.

UN Women Pakistan and foodpanda Pakistan collaborate for the promotion of workplace safety and gender equality for women
A coffee house as a beacon of hope
LinkedIn and UN Women join hands to create employment opportunities for women in Asia and the Pacific
Take Five: “The Voices of Bangladeshi young people on Climate Action are loud and clear. We Need to act now for a better future, and this cannot wait.”
UN Women Pakistan and Nishat Mills Limited (Apparel Division) join forces to promote gender equality and safer workplaces for women
END_OF_DOCUMENT_TOKEN_TO_BE_REPLACED