The policy recommendations, which will serve as the regional input to 63rd session of the Commission on the State of Women that will be convened at the United Nations headquarters in New York from 11 to 22 March 2019.

The Meeting served as an opportunity to engage member States in preparations for the Asia-Pacific High-Level Meeting on Gender Equality and Women’s Empowerment: Beijing+25 Review, which will be convened by UN ESCAP in cooperation with UN Women and with the support of the TWG-GEEW, in November 2019, Bangkok.

Gender inequalities remain profound and entrenched across Asia and the Pacific, despite recent rapid economic progress. Women’s inequitable access to health, education and other basic social services starts young and has a life-long, cumulative impact on their social and economic opportunities. To overcome such disadvantages, "investment in well-coordinated and gender-responsive social protection systems, public services and sustainable infrastructure is essential to support women’s livelihoods, health and well-being, be it childcare services, health and education, or public transport,” said Anna-Karin Jatfors... More

Nepal’s hospitality and entertainment sector includes dance restaurants, singing or “duet” restaurants, open restaurants, and the smaller snack bars known as cabin restaurants, as well as massage parlours. The workplaces in this sector are sometimes registered and sometimes not, but the women who work there are almost always unregistered... More

Speech by Anna-Karin Jatfors, Regional Director a.i., UN Women Regional Office for Asia and the Pacific. "Data shows that women and girls are not just much more likely to die in disasters, but are also disproportionately affected–through loss of assets, income security, and the destruction of public services...” More

Speech by Hongjoo Hahm Deputy Executive Secretary UNESCAP. "This would include the provision of affordable child care services, which would free-up time for mothers to engage in activities that are appropriate to their situations. Provision of water, sanitation and clean energy.." More

Donica Pottie and Kaushal Sharma | Two gender equality advocates who went beyond generations have met and talked about and their stories of changes since 1995 and the next steps they are looking forward to in advancing gender equality, ahead of the 25th year of Beijing Platform... More

Ivy Josiah and Anisha Luintel | Two gender equality advocates who went beyond generations have met and talked about and their stories of changes since 1995 and the next steps they are looking forward to in advancing gender equality, ahead of the 25th year of Beijing Platform for Action... More

Donica Pottie, Canadian Ambassador to Thailand, participated as a young diplomat and activist in the 1995 Fourth World Conference on Women in China. In 2020, she spoke about the challenges facing the new generation of advocates fighting for gender equality and the empowerment of women and girls... More

Take five: “Access to certain services has been diminishing as a result of public-private partnerships”

Gerifel Cerillo said "At the moment, those women have to wake up at 4 a.m. to make sure the chores are done in time for them to be at the station by 5, because it takes an hour to get a place on a train, and then another two hours to get to work by 8. Then in the evening they have to do it in reverse before taking care of their kids again..." More

Calling all youth — join the fight for gender equality at CSW

The CSW is a global body to promote gender equality and the empowerment of women and girls. UN Women invites young people from all over the world to the CSW annual session in New York, where they will join thousands of gender equality advocates who are speaking out and demanding change... More

Selai Korovusere reflects on Fiji’s approach to gender equality and the gender-lens needed for inclusive social protection for women and girls... More

Luzviminda C. Ilagan speaks on key achievements in the Philippines in promoting gender equality and the empowerment of women and girls... More 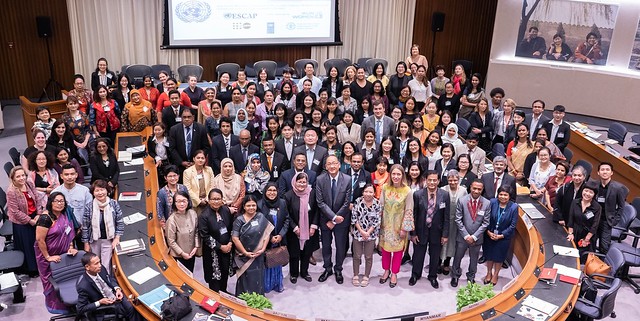