Orange the world to end violence against women

From 25 November through 10 December, Human Rights Day, the 16 Days of Activism against Gender-Based Violence aim to raise public awareness and mobilizing people everywhere to bring about change. This year, the UN Secretary-General’s UNiTE to End Violence against Women campaign invites you to “Orange the world,” using the colour designated by the UNiTE campaign to symbolize a brighter future without violence. Organize events to orange streets, schools and landmarks!

Snapshots of orange events in Asia-Pacific 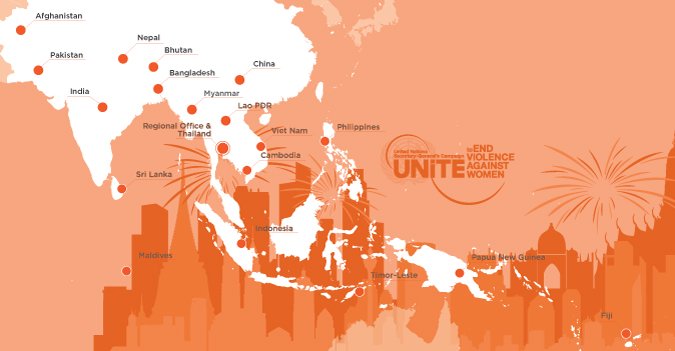 See more from around the world »

Colombo, Sri Lanka — The Ministry of Women and Child Affairs of Sri Lanka, together with UN Women illuminated in orange the iconic Independence Square in Colombo to commemorate the conclusion of the 16 Days of Activism Against Gender-Based Violence campaign celebrated on December 10th...more

Islamabad, Pakistan — The National Monument of Pakistan located in the Country’s capital city, Islamabad, commenced the 16 Days of Activism campaign, by turning ORANGE in colour on the eve of 25 November 2015, to raise awareness and mobilize actions to prevent and eliminate violence against women and girls...more

Kathmandu, Nepal — Nepal’s Parliament puts an orange spotlight on gender-based violence today as part of a 16 Days of Activism Against Gender-Based Violence Campaign. Starting Friday until Sunday evening, the Parliament building turns orange as part of the UNite campaign for 16 days of Activism against gender-based violence. This initiative calls...more

Jakarta, Indonesia — In observance of 16 Days of Activism against Gender-based Violence, UN Women Indonesia held a range of activities, including lighting up in orange the Monas Tower in Jakarta, radio talk shows, university events and a film screening to raise awareness of and encourage action to stop violence against women and girls...more

Male', Maldives — Maldivians marked the 16 Days of Activism Against Gender-Based Violence campaign with bicycle rallies in Malé city, Addu City and Kulhudhuffushi to raise awareness and highlight the need to end violence against women and girls. Young people...more

More on #Orangetheworld in Asia-Pacific

Orange your profile picture to show your support!

Join the conversation and Orange the World in 16 Days on social media! Hashtags: #orangetheworld and #16days

Join the ‘Orange the World’ Event page on Facebook and post photos and actions happening in your country during the 16 Days of Activism.

A social media package with sample messages in English, Spanish and French will be available here.