Confronting dowry-related violence in India: Women at the center of justice

When Shehnaz Bano married Naved in 2009, she never suspected her life as a married woman would soon spiral into a circle of violence. 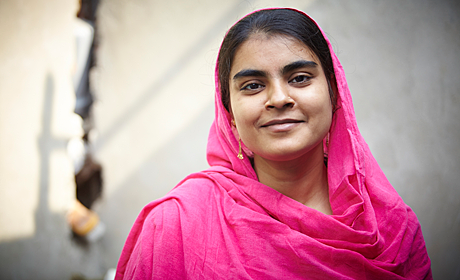 Shehnaz Bano endured a life of violence since her marriage in 2009, due to dowry-related disputes. She decided to take her case to court under the Protection of Women against Domestic Violence Act, with the support of the UN Trust Fund grantee Lawyers Collective. Today, along with other women, she encourages female survivors of violence in New Delhi to speak out and pursue their right to a new life under the Law. Photo credit: UN Trust Fund/David Goldman

New Delhi - Naved’s parents were always opposed to his relationship with Shehnaz as they deemed the initial dowry offered by her family as unsatisfactory. To appease the in-laws, Shehnaz’s parents gave a significant dowry during the wedding and even afterwards, giving in to the pressure of the in-laws.

When Shehnaz’s parents were no longer able to fulfill their demands, the abuse began: she was forced to do all the household work and cater to the demands of each of the eight members who resided there.

She was required to dust and sweep the house, wash clothes and cook food for the family. She was given very little food and had no money for personal needs. Her in-laws and her husband Naved treated her like a slave. She started falling ill frequently due to the stress and the workload, but since she had no money, she was forced to ask her parents or her brother to take her to the hospital. Moreover, every time she went to the hospital, her in-laws would lock the house, thus denying her entrance. She would knock for hours and eventually, the neighbours, and often, the police, would intervene and only then would the in-laws allow her back in.

Despite the mistreatment she had to endure, lack of financial independence and the stigma associated with divorce in many parts of India forced her to stay with her husband.

Dowry-related violence is widespread in India. In 2011 alone, the National Crime Records Bureau reported 8,618 dowry harassment deaths. Unofficial figures show that these numbers are at least three times as high. The 1983 Criminal Law Act made “cruelty” to the wife by the husband or his relatives an offense, but it focused on punishing the perpetrator, while failing to recognize and fulfil women’s needs for immediate and emergency relief.

This changed with the passage of the Protection of Women from Domestic Violence Act (PWDVA) in 2005, following a decade of sustained advocacy and activism by the women’s movement in India. Drafted by the Lawyers Collective Women’s Rights Initiative through a consultative process and with support from the UN Trust Fund to End Violence against Women, the law built on the real experiences of women. By centering on the need to protect women and to enable them to negotiate a life free of violence, the law broke the myth that for victims, justice is limited to tougher penalties.

“The PWDVA marks a radical change bringing violence within the private sphere to the forefront, and recognizing domestic violence as a violation of the human rights of women,” says Indira Jaising, Executive Director of Lawyer’s Collective-Women’s Rights Initiative. “The passing of the domestic violence law has reinforced the norm that violence against women is unacceptable and, more importantly, this norm has been backed by State sanctions.”

For Shehnaz, the law became the channel to escape violence. When one day her sister-in-law attacked her with a knife, and she was then left with no financial or other support from her husband, she decided to file a case. The Lawyers Collective, which introduced Shehnaz to the law, accompanied her as she succeeded in securing financial support under the PWDVA Act—rebuilding her life independent of her husband and in-laws.

“Many are the lessons I have drawn,” she says. “I have learnt to not have any fear and to go out and stand on my own feet, to be brave.”

Today, Shehnaz is enrolled in Delhi University, pursuing a diploma in computer science. She has become an active member of the Delhi Domestic Violence Survivors Group established by Lawyers Collective. The group provides legal support to women engaged in litigation and in the process of receiving relief, and engages pro-bono lawyers to work as mediators between the Court and the women. As Shehnaz explains it, the group is also a space of inspiration and mutual support:

“I encourage women to speak out and seek support from organizations such as Lawyers Collective, to attend survivor meetings and to build up their confidence and regain their pride.”

Meanwhile, work continues for Lawyers Collective. With a new grant from the UN Trust Fund, the organization has been monitoring the implementation of the Law through its annual reports, “Staying Alive”. A national picture of the effectiveness of the Law, the reports carry the voices and the stories of thousands of survivors like Shehnaz.

In January 2013, the 6th “Staying Alive” report will be launched at a national conference that will be attended by India’s Minister for Women & Child Development. In December, a documentary highlighting the monitoring work of the Lawyers collective was released.

From Campaign to Monitoring: Protection of Women from Domestic Violence

Documentary about the work of the Lawyer’s Collective