6 Years after introducing domestic violence laws: How are we faring?

New Delhi, 21 January 2013: Six years since India passed its historic legislation to prevent domestic violence, there is much to celebrate and much to learn. Experts and policymakers came together to discuss the status of the implementation of the Act during the launch of the 6th report monitoring the Act. ‘Staying Alive: Evaluating Court Orders’ was officially released by the Hon’ble Chief Justice Altamas Kabir.

Supported by UN Women, the Staying Alive report is an independent monitoring of the Act by Lawyers Collective Women’s Rights Initiative between September 2011 and September 2012.

The Report identifies key strengths of the implementation of Act and areas where improvement is needed. The Protection of Women from Domestic Violence Act (PWDVA) 2005 is a progressive, and rights based piece of legislation to prevent and punish incidences of domestic violence. 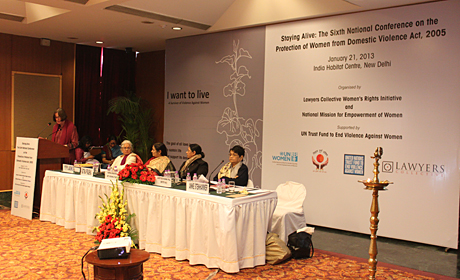 The report was launched by the National Mission for Empowerment of Women (NMEW), the Lawyers Collective Women’s Rights Initiative (LCWRI) and UN Women at the 6th National Conference: “Staying Alive: Implementation of Protection of Women from Domestic Violence Act, 2005”.

In her inaugural address, Smt. Krishna Tirath, Minister of Women and Child Development announced the decision to allocate an annual budgetary provision of Rs. 100 Crores for the appointment of Protection Officers, working exclusively for the implementation of the law.

In relation to the Delhi gang rape of 16 December 2012 the Hon’ble Chief Justice said that the incident was “a crime, not just against an individual but against women and society in general”.

Findings show that married women are the single largest users

How data was collected for Staying Alive

Three Supreme Court and thirty four High Court judgments were delivered during this monitoring period. 22,255 Orders were received from 1 April 2011 to 31 December 2011 , out of which 9,526 orders were analyzed for the purpose of this Report. The data was collected from a range of state agencies. As each state implements the PWDVA in their own model, one of the challenges for completing the Report was comparing data and indicators which varied from state to state. 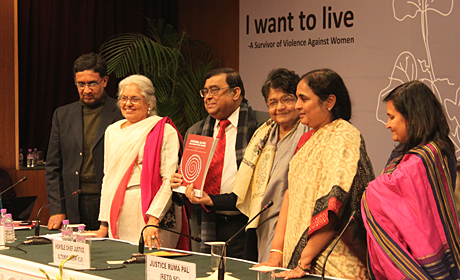 Progress made but improvement necessary

During the conference, many affirmed that despite the progress made, there are a range of areas in which improvements are necessary. Patriarchal beliefs and biases still affect service delivery in the justice system. Other challenges include the employment of under-skilled Protection-Officers.

Many women still remain unaware of the existence of the PWDVA and the services that exist to support women through domestic violence. The Conference identified that all those who suffer from domestic violence should know that it is a crime, and that there is a law to support them. Others criticized the financial commitment to the PWDVA with an insufficient budget proposed in the draft Twelfth Five Year Plan.

Resources to monitor the Act

Two other publications were also released at the event : ‘Best Practices Manual PWDV Act 2005’, and the ‘ Resource Tool: Monitoring & Evaluation of PWDV Act 2005’ .

“Moving forward, the role of Monitoring and Evaluating of the implementation of the PWDVA 2005 will be taken over by the Ministry of Women and Child Development from Lawyers Collective. The Best Practices Manual & Resource Tool is an important tool to build capacity for anyone who wants to undertake monitoring and evaluation of the Act,” said Ms. Anne Stenhammer, Representative of UN Women’s Office for India, Bhutan, Maldives & Sri Lanka.

The Staying Alive initiative was funded through the United Nations Trust Fund to End Violence against Women.

To read more about the report: http://www.unwomensouthasia.org/assets/Staying-Alive-Evaluating-Court-Orders1.pdf

Related News
24/12/2012
From Campaigning to Monitoring: Making Domestic Violence Laws Meaningful to Women in India
24/12/2012
Confronting dowry-related violence in India: Women at the center of justice
31/10/2012
Civil Society, United Nations and Government Officials join hands to end violence against women in India
03/10/2012
UN Women in Afghanistan welcomes government statements confirming that ‘Running Away’ is not a crime under Afghan law
10/04/2012
UN welcomes passing of the domestic violence bill in the Maldives
END_OF_DOCUMENT_TOKEN_TO_BE_REPLACED