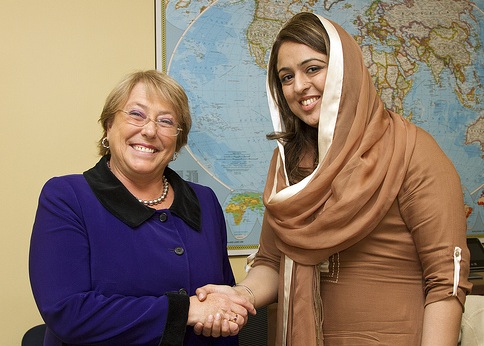 UN Women Executive Director Michelle Bachelet meets with Fiza Batool Gillani, Goodwill Ambassador on Women’s Empowerment and Head of the Pakistan Delegation to CSW during the 56th Session of the Commission on the Status of Women

Women in Pakistan have faced formidable challenges in their efforts to achieve gender equality and address gender-based violence in their country, with particular problems posed by elements among customary norms and practices.

Yet throughout the past few years, breakthroughs in pro-women legislation have shown that both the efforts of Pakistan’s government, and the advocacy of groups working toward women’s empowerment in the country, are taking effect.

On International Women’s Day, 8 March, the President of Pakistan signed the National Commission on the Status of Women Bill 2012 into law, which has afforded the Commission new financial and administrative autonomy, and therefore better scope to investigate women’s rights violations.

The Acid Control and Acid Crime Prevention (Amendment) Bill was passed in the Senate on December 2011, and for the first time gives guidance on how the State should punish offenders and support victims of this violent gender-based crime. Women are also now better protected from sexual harassment in the workplace and from domestic violence, since Acts on these issues were passed in 2010 and 2011 respectively.

And to be sure that the laws on sexual harrassment are built structurally into the system, a code of conduct is being monitored by a watch committee formed by the National Commission on the Status of Women in 2010, which is made up of representatives from the government, civil society and UN Women.

Throughout these legislative processes, UN Women has worked with local NGOs to research the issues, facilitate consultations among experts and civil society, and draft legislations. These have involved dialogues, roundtables, trainings and seminars on issues and obligations relating to gender equality, and have engaged those who work within the national machinery, such as parliamentarians, and those who lobby on it from the outside.

These platforms have developed advocacy strategies and held dialogues with parties holding reservations, to foster greater understanding on the need for change. Meanwhile UN Women experts have worked to help ensure that draft legislation is in line with best practice and international standards, to train those involved, and to monitor it, once passed.

Such laws will be better followed if mindsets and stereotypes are changed to better reflect equality and non-discrimination. To engage people on the ground with the country’s commitments on ending gender-based violence, UN Women launched the One Million Signatures Campaign during the annual UN-led 16 Days of activism in Pakistan in 2011.

The campaign worked in partnership with organizations from the Elimination of Violence against Women and Girls (EVAW/G) Alliance, and became the first of this scale on this issue. 4,500 community members and social media users were mobilized, as well as 1,500 Pakistani women leaders, as they collected more than 700,000 signatures in support of EVAWG goals. Charters of Demand from 57 districts have also been presented to parliamentarians. The actions meanwhile engaged women in empowerment-related work across the country, whether encouraging leadership among marginalized women, or campaigning on improving the response of the criminal justice system to gender-based violence.

These breakthroughs in law, and the advocacy surrounding them, have shown that there is commitment to securing women’s empowerment in Pakistan at every level. With further monitoring, support and the empowering of women’s networks, these triumphs will hopefully translate into real and concrete change for women in Pakistan.

Related News
30/03/2017
UN Women and Morango Films Screen the top 25 short films on ‘Social and Political Rights of Women’ under Pakistan’s first-ever ‘Izhar by Film Fellowship’
01/02/2022
In the words of Tarikul Islam
20/12/2021
Joint Statement: UNHCR and UN Women join efforts to protect and uphold the rights of women and girls in Afghanistan
30/11/2021
I am Generation Equality: Tabbasum Adnan, Founder of First All-Women Council of Tribal Leaders in Pakistan
24/11/2021
Take five: “The justice system must be responsive to persons with disabilities.”
END_OF_DOCUMENT_TOKEN_TO_BE_REPLACED