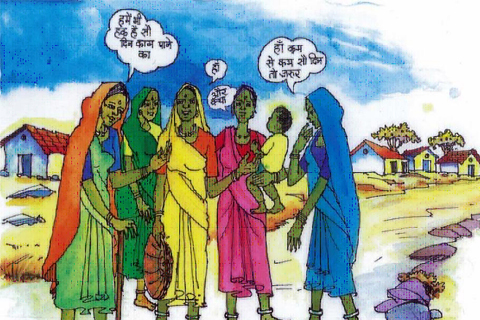 To help Dalit women learn about their employment rights, Gender at Work and Sahjani Shiksha Kendra published a training manual, using such cartoons

While implementing programmes that support women’s participation in national employment programmes in India, Civil Society Organizations (CSOs) can learn from from each other.

New Delhi - Four organizations, two states, twenty-four months and one programme: “Dalit Women’s Livelihood Accountability Initiative”. This is what it took to bring about changes in the lives of 14,000 Dalit women who are now able to claim their rightful entitlements under India’s flagship programme – The Mahatma Gandhi National Rural Employment Guarantee Act (MGNREGA). The Act guarantees 100 days of paid employment annually for building community assets. Moreover equal wages are given to men and women, which is often not a norm in India.

How did they do it? The four organizations complemented each other to implement the project that was supported by UN Women through the Fund for Gender Equality (FGE). Building on each others niche and experiences, they used different strategies to ensure that the Government of Uttar Pradesh was delivering on its promise. Gender at Work, the leading organization, calls it the Action Learning Process. “Each organization used their own strengths and learnt from each other as peers,” explains Praneeta Sukanya Kapur, Programme Manager,Gender at Work. “They proceeded differently in each area but the parameters and expected outcomes of the programme were defined collectively. It worked really well for us.”

From labour unions to street plays
In Varanasi district of Uttar Pradesh, Lok Samiti, a Civil Society Organisation (CSO), encouraged Dalit women to join existing labour unions and participate in the workforce. They focused on the most marginalized women from the Muslim and Musahar community. Since it had very little experience on dealing with gender issues, Lok Samiti received capacity building inputs from Gender at Work. They are now increasing women’s participation in leading positions within their own organization.

In Chitrakoot and Banda districts of Uttar Pradesh, Vanangana, another CSO, raised awareness about MGNREGA through street plays and social audits. They also created an ‘all women’s work site’. “The village needed a pond so the idea to build a pond under MGNREGA was quickly accepted. But the panchayat would not allow women to work on their own because digging is traditionally done by men, while women carry the mud. We had to fight very hard to get it,” says Pushpa, member, Leadership Collective, Vanangana. Thanks to the project, Dalit women were involved in all stages of planning and implementation of the worksite.

In Uttar Pradesh’ Lalitpur district, Sahjani Shiksha Kendra (SSK) went a step further and trained Dalit women to become worksite supervisors. A manual was developed to help them deal with issues such as gender and caste . It is now being used in all trainings. 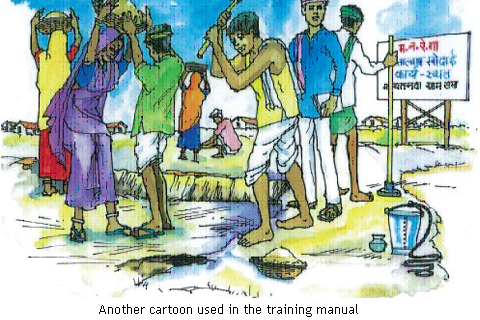 The selection of partners on the ground coupled with innovative strategies contributed to the success of the programme.