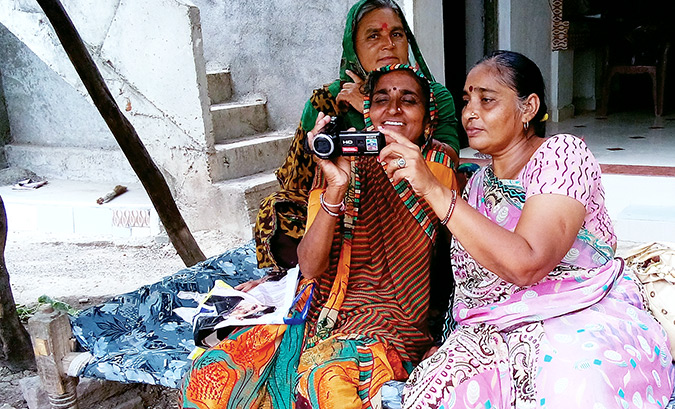 The Fund for Gender Equality is UN Women’s global grantmaking mechanism dedicated to the economic and political empowerment of women worldwide. Guided by UN Women’s mandate, the Fund provides technical and financial support to high-impact, innovative initiatives from women-led civil society organizations that demonstrate concrete results on the ground, especially for women in situations of marginalization. Since its launch in 2009, the Fund has delivered grants of USD 64 million to 120 grantee programmes in 80 countries, touching the lives of more than 10 million direct beneficiaries.

In 2015, the Fund for Gender Equality awarded USD 7.3 million in grants to 24 top-quality programmes to be implemented in 2016-2018 in six regions – East and Southern Africa, West and Central Africa, Americas and the Caribbean, Arab States, Asia and the Pacific, and Europe and Central Asia. The 24 new programmes will reach more than 325,000 direct beneficiaries, of which 45 per cent come from low-income countries and approximately 53 per cent are based in fragile states.

Through this new grant-making cycle, UN Women has reaffirmed its commitment to supporting and strengthening women’s organizations as catalyzers of change and as critical players to achieve gender equality and the sustainable development agenda. The new portfolio will meaningfully contribute to SDG5 on Gender Equality, as well as to at least another 9 Goals, reflecting the multi-dimensional nature of women’s empowerment.

The Fund provides grants on a competitive basis within the following thematic areas:

To learn more about FGE in Asia-Pacific click here

Women in rural Cambodia cultivate their way out of vulnerability

In five rural districts of Battambang and Siam Reap provinces in Cambodia, Banteay Srei, a local women-led NGO works with the poorest, most marginalized women – including those who are illiterate or single mothers, to help them improve their livelihoods. Twenty-year-old Vern Chantha is one. The fifth in a poor family of seven children with unemployed elderly parents, she decided to participate in training on agricultural techniques to improve productivity on her 100-square-metre family farm. “Sometimes the plants didn’t grow... More

Many of the Philippine women working abroad face exploitation and abuse, but they may face even greater challenges when it’s time to go back home. After long years of separation from family and country, they are estranged from children and spouses and have problems finding new work when they return back home. And despite so many hours of toil abroad, they often don’t have enough savings to get started again. These women have... More

In Singapore and Indonesia, women re-claim rights from religious fundamentalists

The ideologues say men are the bosses of the household and women should just keep it clean and take care of the children. They tell women not go out at night, and not to wear short skirts - if you are sexually assaulted, it is your fault. “Gender equality” is a heresy imposed by Westerners... More

An estimated 40 – 50 per cent of migrants in Hanoi and Ho Chi Minh City, the two biggest cities in Viet Nam, are women, and they face distinct challenges. Low and unstable incomes and lack of social protection make them particularly vulnerable to abuse and exploitation. But migrant women workers of Viet Nam refuse to live on the fringes any longer. More than 10,000 migrant workers have learnt how to access social welfare benefits, legal protection and health care. They are advocating for... More

Every woman ‘should rise up to the challenges that surround her, and break free’

With help from Anupama Suresh from IT for Change, Soumya wrote this account of her life journey, to show other young women in difficult situations that they can empower themselves. “Today, when I go to the villages, I am recognized for the work that I do – by the destitute elderly whose pension applications I have filled; by the women's collectives to whom I have explained how to demand their monthly food rations from the fair price shop in their village; and by the students whom... More

With more than 700 million young people in the Asia-Pacific region, youth-friendly spaces for discussion and participation are essential. However, these kinds of scenarios remain scarce and more often than not young people’s voices, in particular girls’ voices, are side-lined in national, regional and international fora, even on issues that directly affect and concern them... More

The project may be ending, but our mission has only just begun”, it is with these words that Madame Duan Guohui, Deputy Director General of the International Department of All-China Women’s Federation (ACWF), opened the “Enhancing Chinese Women’s Political Participation” meeting in Beijing. The meeting, held on 17-18 December brought together over 100 women and men - from more than 20 provinces across the country, to share their ... More

With less than 13 years to achieve the high ambitions of the 2030 Agenda for Sustainable Development, we must move quickly, coming together to realize a more peaceful, prosperous, equal and sustainable world. By 2030, the effects could be transformative, particularly for women and girls. This will depend, above all, on realizing our responsibility to reach the most marginalized communities and address the multiple layers of discrimination and inequality they face. They must not fall through... More

‘LEAVING NO ONE BEHIND’ IN ACTION Observations from FGE’s seven-year experience working with civil society Gender equality is at the forefront of the 2030 Development Agenda. The Sustainable Development Goals include a stand-alone goal to advance equality and gender-related targets mainstreamed across the Global Goals. But if something has opened a door for drastic progress in the lives of women and girls worldwide, it is the principle of leaving no one behind... More

Taking a gender equality approach to support rural women in advancing their social, economic and political rights. Supported by the UN Women’s Fund for Gender Equality and implemented by PRADAN in partnership with Jagori, a programme on “Facilitating Women in Four Endemic Poverty States of India to Access, Actualize and Sustain Provisions on Women’s Empowerment” organized over 75,000 marginalized rural women, including over two-thirds from Scheduled Castes and Scheduled Tribes, into self-help groups (SHGs), to transform gender relations, raise their... More

UN Women’s Fund for Gender Equality is bringing about real changes in lives and communities all around the world. It is one of the world’s leading grant-making funds for women’s equality.... More

FGE in Asia-Pacific
Up one level 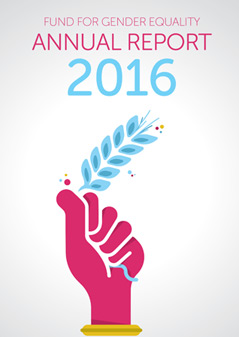 In 2016, 74 per cent of the FGE’s portfolio encompassed 25 programmes from the third grant-making cycle. They were selected through the 2015 Call for Proposals. In the first months of implementation, the newest grantees started to develop partnerships with key stakeholders essential for impact and the durability of results. Most of them compiled baseline data as the backbone of sound results monitoring and impact measurement, and developed training content. Despite a necessary learning curve related to results-based management and reporting procedures, grantees achieved some noteworthy results. This report captures some of them, with a view to providing the first snapshot of the FGE’s contributions to localizing the SDGs... Read more

The Fund for Gender Equality is UN Women’s global grant-making mechanism and multi-donor fund dedicated to the economic and political empowerment of women. It finances high-impact initiatives by women-led organizations that make measurable contributions to the SDGs, and demonstrate concrete results on the ground, especially for the most marginalized women and girls... More