Indigenous women mobilizing for their rights 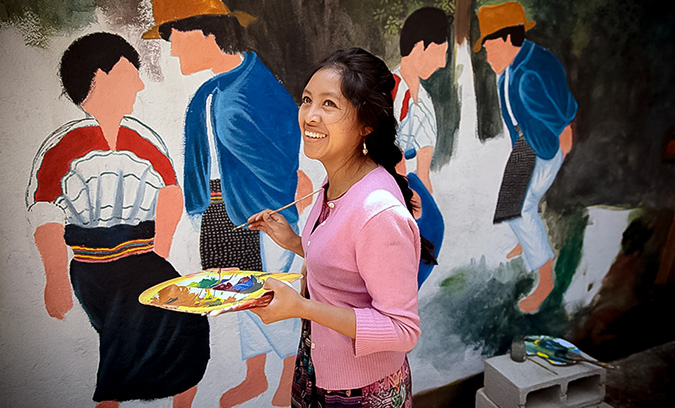 On International Day of the World's Indigenous Peoples, UN Women calls on each of us to commit to making the voices of indigenous peoples, and indigenous women, louder and more impactful than ever before. Read more ►

At a time of unprecedented human mobility, indigenous women are on the move too, often fleeing violence, environmental disasters and land encroachments that have eaten into their sources of food, water and way of life. The positive economic spin-offs of migration don’t always reach them. Theirs is a move also for justice, as they mobilize to make their voices heard, demand punishment for perpetrators and reparations to restore their dignity.

This year, the International Day of the World’s Indigenous Peoples (9 August) will focus on the theme of “Indigenous peoples’ migration and movement”.

UN Women works with indigenous women around the world as they strive for rights, protection and their rightful seat at any table where decisions impacting their lives are being made.

Indigenous women are custodians of their communities’ traditions and natural resources, but they are also among the world’s most vulnerable and marginalized peoples. On International Day of Indigenous Peoples, learn more about the challenges indigenous women face, and how they play key roles in their communities and contribute to peace building and sustainable environmental practices.

“People voted for me because they wanted to see change”
Irlanda Pop is the only indigenous Mayor and one of three women Mayors in Guatemala. Since her election in 2015, Pop has survived numerous attacks, including gun shots and men storming her office with machetes, as well as online abuse. As a woman Mayor, the pressure on her is always higher, but she believes girls and women are the future of Guatemala and indigenous women must be in decision-making roles.

“We want to be heard, to be recognized, this land is ours”

Alice Lesepen came to participate at the 62nd UN Commission on the Status of Women from the indigenous Rendille Community in Marsabit County, Kenya. The pastoral community depends entirely on the communal land available to them. One day, when investors came to develop the land without the community’s consent, women started to organize. They have taken the case to the court to get their land back.

“I am a “nofotane” woman. I am a strong advocate of equality for all women in my village”

In Samoa, indigenous women marrying outside their home village are referred as “nofotane”. They are often denied any voice in decision-making within their homes and communities. With the support of UN Women’s Fund for Gender Equality, the Samoa Victims Support Group raised awareness and advocated for nofotane women’s rights. As a result, a nofotane representative now sits in the village council meetings.

Stand up for rights, cultures, and livelihoods of the world’s indigenous peoples.

A social media package with graphics and suggested messages in multiple languages can be found here.