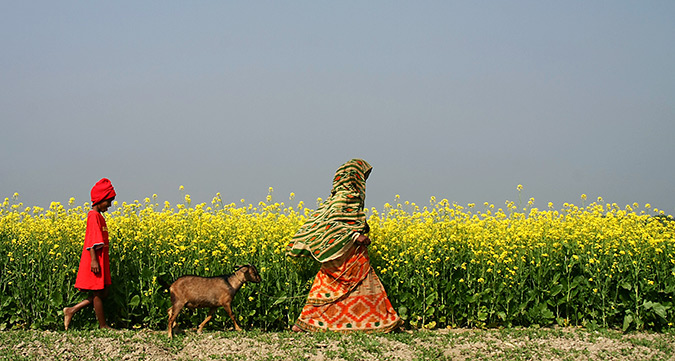 Grazing in the mustard field: A mother with her child taking a goat for grazing in a mustard field in Dohazari village, Chittagong. Micro finance gives loan to the poor village women for buy domestic animals which eventually a profitable for those poor family when the sell it after taking care and also give milk which changes their life. Photo: UN Women/Jashim Salam

When crisis occurs, people’s lives change in an instant. It may be a flood that sweeps away homes and livelihoods in a flash; or a conflict that tears apart families forever, targeting those who had no role in its making.

On World Humanitarian Day, UN Women fully supports the UN's #NotATarget campaign, and calls on everyone to "come together to change the status quo—for women and girls, and for all civilians caught up in crises".

On this year's World Humanitarian Day, 19 August, the United Nations and partners are advocating for the protection of civilians, humanitarian workers, and all those affected by conflict.

Conflicts impact the lives of women, girls, men and boys differently. Women and girls typically take on a higher burden of care-related tasks, such as providing food and water and caring for the sick. As society’s protection structures and support networks break down, and people flee impacted areas, women face heightened risks.

Adolescent girls in conflict zones are 90 per cent more likely to be out of school when compared to girls in other, conflict-free, countries. Girls are often kept out of school due to concerns about safety.

Click to view the infographics in full screen mode.

Women in crisis :  vulnerable to risk, vital to recovery

Armed conflicts. Earthquakes and storms. Deadly disease outbreaks. Such crises destroy human lives and communities with striking regularity. Each year, they hit dozens of countries in every region of the world, sometimes with no warning at all. Humanitarian assistance can be far more powerful when it reaches and empowers women. These are women’s stories of hardship and courage in the face of crisis.

Stories of women in crisis

Putting the “Grand Bargain” into Action in the Pacific

On 19 August, World Humanitarian Day, UN Women joins other humanitarian actors in recognising the essential work of humanitarians in conflict zones and disasters. For UN Women Fiji Multi-Country Office, working in the Pacific region means preparing for and responding to increasingly severe tropical cyclones – as seen with devastating Tropical Cyclone (TC) Winston that hit Fiji in February 2016, affecting nearly 40 per cent of Fiji’s population. Despite a strong civil society and humanitarian system led by the Government of Fiji, many local groups struggled to access funds in the critical early days of the disaster response... More

UN Women in partnership with the Office of the United Nations High Commissioner for Refugees (UNHCR) is helping provide emergency shelters and other supports to ensure the safety and protection of thousands of women in the two Rohingya refugee camps in Cox’s Bazar district in southeast Bangladesh that was struck by Cyclone Mora in the morning of 30 May 2017 this week. At least 27 of the refugees were injured by the storm... More

Expert’s take: Getting the post-cyclone response right for women in Fiji

A Category 5 cyclone pulls root crops out of the ground long enough to fill the holes beneath them with water so that whatever hasn’t been scattered rots; it sends flash floods and storm surges roaring through villages, sweeping away people and their belongings; it turns villages into piles of debris and roofing iron into a deadly weapon. [..] Consequently, when disaster hits and the humanitarian response kicks into gear, one of the biggest challenges is ensuring that different groups in society, including women and girls, have equal access to relief supplies and services, and that the needs of the most vulnerable are fully integrated at every level of response and recovery... More

From mixed vegetable and mango pickles to fruit jams and seasonal juices, packaged in little plastic jars, rural women from Sindh Province, Pakistan, are entering into local business to generate income. UN Women Pakistan in collaboration with a local partner, Strengthening Participatory Organization, trained local women who are mostly engaged in subsistence farming and other small scale activities to become entrepreneurs. With their limited knowledge and traditional methods of food preservation, the women were introduced to modern techniques in producing edible and preservable products such as mixed vegetable and mango pickles... More

Crises impact women, girls, boys and men differently. While often sidelined, women must be included in decision-making about the kind of assistance and protection they need during crisis. UN Women works to ensure equality between women and men as both partners and beneficiaries of humanitarian action. We work proactively with humanitarian actors to ensure emergency response plans adequately integrate gender equality and women’s empowerment; that women and girls are equally consulted to understand and address their needs and vulnerabilities; that gender is mainstreamed into humanitarian... More

Following the devastating floods that have impacted the lives of nearly all residents in Western Fiji, The UN Women Pacific  Office has received 50,000 USD to provide gender responsive support to the areas impacted by floods. The largest island of Fiji, Viti Levu, experienced heavy rainfall and flash flooding, beginning on 30 March and continuing into early April as Tropical Cyclone Daphne passed at a distance. Water levels in major rivers reached critical heights, and areas in the west of Viti Levu,particularly Rakiraki, Tavua, Ba, Lautoka, Nadi and Sigatoka were most affected. The Government of Fiji declared a State of Natural Disaster for parts of the Western Division (north coast and western half of the main island), which was most affected again, after being struck by floods earlier... More

For many of the world's indigenous people, loss of their traditional lands threatens their very survival and their cultures could simply disappear. In Thailand, indigenous women have joined the fight for justice — and for the future of their people. Here's our story.

Rights Based Approach to Gender Equality in Climate Change Adaptation

This story depicts Rural Women in Bangladesh who are struggling and challenging with Climate Changes and ways to Build-Back-Better their community. The project is jointly implemented by UN Women Bangladesh, BRAC and Bangladesh Centre for Advanced Studies.

Gender equality and the empowerment of women become ever more important as the frequency and severity of storms, floods, drought and other climatic hazards increase in the Pacific region. Due to prevailing gender inequalities and social norms, women and girls are disproportionately affected by climate change and disaster impacts. Yet their participation and leadership are critical for an all-of-society approach to building the resilience of families, communities and nations. This report presents the findings of the Gender, Climate Change Action and Disaster Risk Reduction (DRR) Research in the Pacific region. The purpose of the study was to provide evidence-based information... More

An overview of the gender analysis of the humanitarian response to 2015’s Kunduz crisis in Afghanistan. The analysis was led by UN Women and the Norwegian Refugee Council, with support from IASC GenCap senior gender advisor and provides an evidence base for future advocacy to ensure women and girls are better integrated into humanitarian action... More

Join the conversation about protecting those affected by conflict using #NotATarget on social media. A social media package along with images in English, Spanish and French is available here.

See our coverage of women in humanitarian action 2016